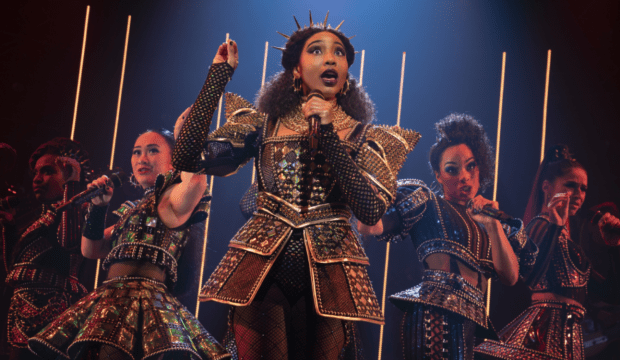 In March of last year, the new musical “Six” was literally minutes away from opening on Broadway when the coronavirus pandemic halted its performance. Eighteen months later, the musical by Lucy Moss and Toby Marlow has officially bowed at the Brooks Atkinson Theatre on Oct. 3, the second new production of the 2021-2022 season.

Moss and Marlow wrote the music, lyrics, and book for this reimagining of the six wives of King Henry VIII as their varyingly unfortunate tales of abuse, neglect, and, yes, beheading get remixed into contemporary pop confections performed concert-style as they attempt to name a leader of their band. The multi-hyphenate Moss also directs the musical with Jamie Armitage. The six wives are portrayed by Adrianna Hicks, Andrea Macasaet, Brittney Mack, Abby Mueller, Samantha Pauly, and Anna Uzele.

“Six” received overwhelmingly positive reviews from critics. Jesse Green (New York Times) calls the show an “entertainment juggernaut” and “a rollicking, reverberant blast from the past” featuring “inexhaustibly catchy songs” that are “a slick blend of pop grooves, tight lyrics and old-fashioned musical theater craft.” Of the six performers, Green singles out Uzele, who “makes a touching creation of Catherine Parr.” Green names “Six” a Critic’s Pick and concludes by praising its “fantastic physical production and unimprovable performances by a diverse cast whose singing is arena-ready but also characterful.”

Helen Shaw (Vulture) similarly calls the production “triumphant” and really appreciates its “smallness,” writing, “The thing feels intimate, private-jokey, for-the-squad.” Although she praises all of the performers, Shaw lauds two in particular as “astonishments”: Hicks, who has a “giant, warm sound – throaty and dark, then brassy and stratospheric,” and Uzele, who “has a soaring Whitney Houston voice, easy whatever her register, moving and accelerating and escalating without any sense of her own strain or transition.” Shaw sums up saying, “The point of ‘Six’ is its escapism.”

Although the last Tony Awards were just last Sunday, it isn’t too hard to predict that “Six” should do well come next Tony nominations morning in the spring. At this moment in the season, six original musicals are slated to open during the eligibility window: “Six,” “Diana: The Musical,” “Mrs. Doubtfire,” “Flying Over Sunset,” “MJ The Musical,” and “Paradise Square.” If past Tony rules continue, then there will be four slots in the contest for Best Musical, and based on its reviews and audience response, “Six” looks likely to claim one of them. Critics also mention the score, costume design (Gabriella Slade), and lighting design (Tim Deiling) as standout aspects of the show.

All six actresses will vie in the Featured category based on their billing unless the production petitions the Tony nominating committee to consider one or more as a lead. That option would seem in contrast with the message of the musical, though, which ultimately focuses on the sisterhood between these queens. With only five slots in the Featured race, though, it will be tricky to predict how many and which performers make the Tony cut, especially with competition from the other new musicals and confirmed revivals of “Caroline, or Change,” “The Music Man,” and “Company” – with Patti LuPone in an already Tony-buzzed turn – plus the upcoming (but not yet confirmed eligible) “Funny Girl” revival and new musical “Sing Street,” too.