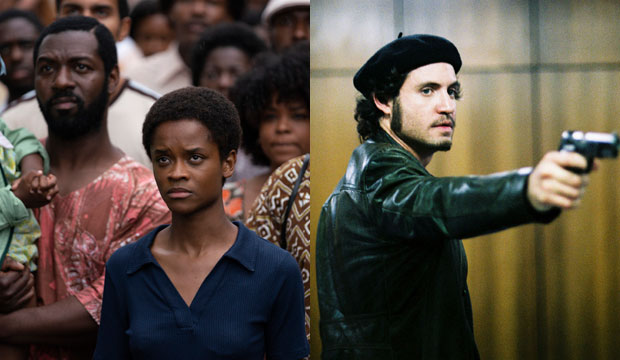 The Los Angeles Film Critics Association caused a bit of a stir when they made the unconventional choice of picking Steve McQueen‘s “Small Axe” as Best Picture of 2020. That’s because “Small Axe” isn’t a film, per se. It’s an Amazon anthology series consisting of five standalone stories. But this isn’t the first time a European auteur blurred the line between television and film. French filmmaker Olivier Assayas‘s miniseries “Carlos” racked up both film and TV plaudits 10 years ago.

“Small Axe” and “Carlos” are different in how they’re presented. “Carlos” told one story about international terrorist Ilich Ramírez Sánchez (played by Edgar Ramirez) over three episodes totaling more than five hours. “Small Axe’s” episodes, meanwhile, are different stories exploring a similar theme: the lives and struggles of Afro-Caribbean immigrants in England over the years. Two of McQueen’s five films are feature-length (“Mangrove” at over two hours, “Red, White and Blue” at 80 minutes), while the other three are closer to the length of TV episodes (“Lovers Rock,” “Alex Wheatle” and “Education” clock in at a little over an hour each).

But “Carlos” and “Small Axe” are alike in that they inspired enough passion from the film community to win plaudits as both a film and television project. Speaking of Los Angeles critics, LAFCA awarded “Carlos” Best Director and Best Foreign Language Film, and it was a runner-up for Best Picture behind “The Social Network.” “Carlos” was also recognized by the Cesar Awards (France’s Oscars), the European Film Awards, the National Society of Film Critics and the New York Film Critics Circle. Meanwhile, it won a Golden Globe as a TV program and earned additional TV nominations at the Screen Actors Guild Awards and Emmys.

SEESteve McQueen on capturing ‘an explosion of Black joy’ in ‘Lovers Rock,’ one part of his anthology ‘Small Axe’ [WATCH]

“Small Axe” is well on its way to following in those footsteps. It has already been cited by film journalists in LA, NY, Chicago and Florida. But at the Golden Globes it’s a contender for Best TV Movie/Limited Series, where six of the Expert journalists we’ve polled as of this writing think it will be nominated, and two of those say it will win just like “Carlos” did: Shawn Edwards (WDAF-TV Fox) and Peter Travers (Rolling Stone).

It’s fitting that in 2020, a year when the COVID-19 pandemic forced most cinema onto TV and streaming platforms, a project like “Small Axe” would continue to collapse the boundaries between the two mediums. Art evolves faster than the categories we create for it, and in this case media technology has hastened that evolution. We must continue to ask what if anything really separates something like “Small Axe” from cinematic achievements like “The Irishman,” and if that’s really any different from a TV series like, say, “When They See Us” or “Chernobyl.” Where do you think “Small Axe” belongs, and is it such a bad thing if the film and TV communities both want to lay claim to it?