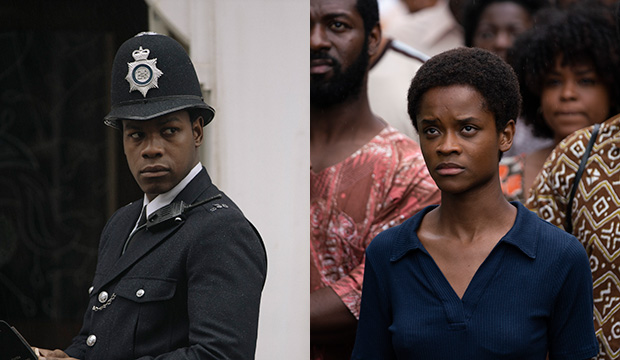 Globe rules stipulate that for anthology performances to be considered in the leading races, the episodes in which they appear must cumulatively comprise at least half of the series’ runtime. Boyega and Wright do not appear outside of their aforementioned episodes, so the Globes count them as supporting players under the overall “Small Axe” title.

“Small Axe” ranks sixth in our racetrack odds for the Globes’ series category, which has five nomination slots. Gold Derby confirmed the reclassification of Boyega and Wright on Dec. 22, at which point each ranked seventh in their respective leading races, based on the combined predictions of Gold Derby’s Experts, Editors and Users.

The move reset their odds, but they have been rising quickly. Boyega debuted in 12th and Wright 13th the following day after some predictions were updated. Wright has climbed to eighth and Boyega now sits in fifth, better than he had ever placed as a lead and meaning that one nomination is forecasted for the show. This ascension is extra impressive because the Globes do not have separate supporting categories for different genres. Boyega trails the likes of Daniel Levy from comedy “Schitt’s Creek” and Tom Pelphrey from drama “Ozark.”

The Critics’ Choice TV Awards do not have the Globes’ rule, so Boyega received a nomination in the lead category. The Screen Actors Guild Awards do not have separate lead and supporting categories, so their submissions there are also unaffected. It remains to be seen whether Amazon will maintain their original strategy for the Emmy Awards later this year.

SEE How “Small Axe” has been navigating this awards season

Adding to the confusion is that regional critic groups have been treating “Small Axe” or its parts as a single or multiple feature film as opposed to television programming. The Los Angeles Film Critics Association named the series overall Best Picture and the Chicago Film Critics Association nominated Wright for Best Supporting Actress. The series was more recently nominated as television by the Independent Spirit Awards in their inaugural Best New Scripted TV Series lineup.