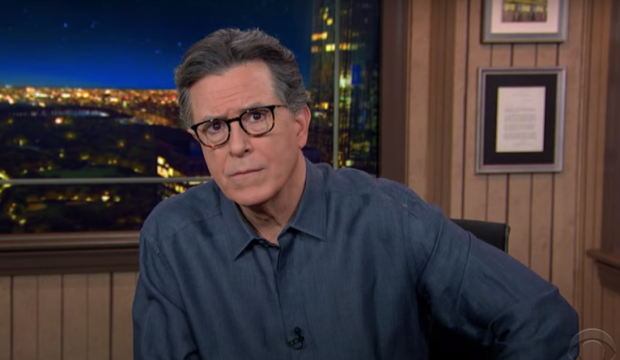 On Tuesday’s “Late Show,” Stephen Colbert addressed the recent mass shooting in Boulder, Colorado, where a gunman killed 10 people in a grocery store. It came just a few days after another spree killing in Georgia where eight people were killed.

“Now due, apparently, to pandemic shutdowns, it has been a year since there has been a large-scale shooting in a public place,” Colbert said. “Now we’ve had two in the last week: Boulder and Atlanta. Evidently, the only solution for America’s gun violence is putting all of us under house arrest.”

Colbert called on the government to impose stronger gun laws, which it hasn’t, bowing instead to the people who defend the guns every time a tragedy like this happens. “The responses from gun apologists, of course, have been predictable,” Colbert said. “The Colorado State Shooting Association released this statement: ‘There will be a time for the debate on gun laws. There will be a time for a conversation on how this could have been prevented. But today is not the time.’ Why not? That’s what they say every time this happens, and that’s what I say about what they say every time they say it every time it happens.”

“Even the idea of it being in a ‘groundhog’ situation is itself a ‘groundhog’ situation,” Colbert continued, referencing the feeling of the same thing happening over and over again with these mass shootings. “Remember, Einstein said, ‘The definition of insanity is doing the same thing and expecting different results. Also, same-day gun purchases — whose stupid idea was that?’ Thanks, ‘Einstein.’”

Colbert called out some specific representatives for their inadequate responses to gun violence, including Louisiana Republican John Kennedy, who made a bizarre false equivalence between drunk driving and gun violence during a congressional hearing on Tuesday, saying they’re both problems that need to be addressed. “OK, I’ll take that deal,” Colbert said. “Let’s regulate guns the way we regulate alcohol and cars. You got to be 21, you got to pass a test to get a license, you got to have a registration and insurance for your gun. If you move to a new state, you got to do the whole damn thing all over again. And you can’t go out loaded.”

Later, Kennedy tried what Colbert called “a different line of folksy b.s.,” saying that America doesn’t have a “gun control problem,” we have an “idiot control problem.”