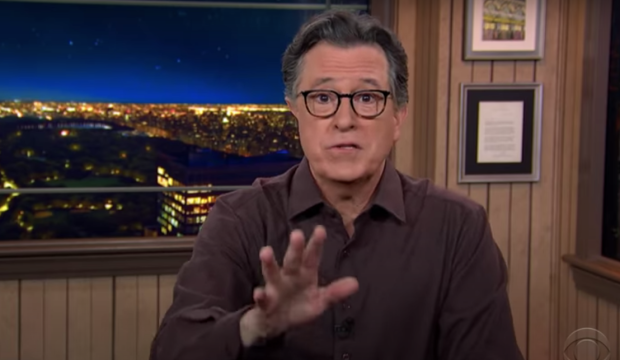 This week marks the start of the Conservative Political Action Conference, better known by the acronym CPAC, an annual gathering of conservative pundits and political leaders — or as Stephen Colbert described it on Tuesday’s “Late Show,” “It’s a who’s who of ‘Who needs that many guns in their rec room?’”

The theme of CPAC this year is “America Uncanceled,” a reference to “cancel culture,” a cudgel embraced by conservatives in the wake of former President Donald Trump’s relentless support for grievance politics.

“Of course, with all the crises facing our nation, conservatives are focusing on the most pressing issue of all: fascists being kicked off of Twitter,” Colbert said. “I didn’t know America was canceled. Although, I’m not surprised. The last season was pretty unbelievable. A pandemic and Nazis? OK, pick one, we’ve jumped the shark.”

As Colbert noted, CPAC has urged conservatives to stand up for Americans whose political views or actions have gotten them “canceled.”

“Which is why they kicked things off by canceling an appearance from one of their panelists for a history of making anti-Semitic claims,” Colbert said. “Good — conservatives don’t want to be associated with anyone like that. It could sully the good name of the mob with aluminum bats trying to murder Mike Pence.”

The panelist in question is Young Pharaoh, who has called Judaism a “complete lie” among other outrageous statements.

“CPAC apparently hadn’t known about Young Pharaoh’s history of anti-Semitism, and called his views ‘reprehensible,’ saying they have ‘no home’ with their conference,” Colbert said. “Yes, conservatives would never doubt the existence of Jewish people. Otherwise, who’s operating the space laser?”

While Young Pharoah won’t attend this year’s CPAC, the roster of speakers is not short on controversial figures. Madison Cawthorn, a North Carolina congressman who was criticized last year for a social media post from 2017 about his visit to Adolf Hitler’s vacation home, is still part of the lineup, as is Trump himself.