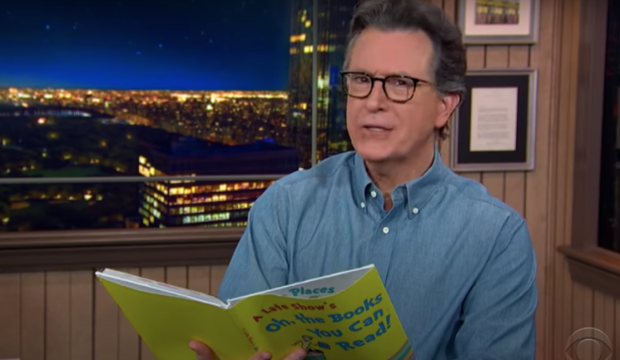 Dr. Seuss Enterprises, the business that oversees late children’s book author Theodor Seuss Geisel’s estate, announced on Tuesday that it will cease publication of six books, including “And to Think That I Saw It on Mulberry Street,” and “If I Ran the Zoo” due to what it described as “hurtful and wrong” depictions of ethnic groups. Naturally, late-night comedians like Stephen Colbert had something to say about Dr. Seuss getting “canceled” – Colbert was in favor of it, because it’s good to retire old things with racist imagery.

“It’s a responsible move on their part,” Colbert said of Dr. Seuss Enterprises’ decision to make sure their books were inclusive. “There hadn’t been an Earth-shattering outcry, but they recognized the impact that these images might have on readers, especially kids, and they’re trying to fix it, because Dr. Seuss books should be fun for all people: Black, white, straight, gay, Sneetches — both star-bellied and plain — Loraxes, Barbaloots, all the Whos down in Whoville, and the strange angry creature named Foo-Foo the Snoo.”

The “Late Show” host added that it’s important to make sure that kids are getting the best version of Dr. Seuss, “because Dr. Seuss has also so many books that are lovely and teach vital lessons that resonate to this day. ‘Horton Hears a Who’ is about listening to underrepresented voices. ‘The Butter Battle Book’ teaches tolerance. ‘The Lorax’ teaches environmental ethics. And ‘Hop on Pop’ warns against the dangers of pop-hopping. The next thing that pops might be his aorta.”

“And I can understand why they’re pulling a small number of his books,” Colbert continued. “‘If I Ran the Zoo’ shows racist depictions of Asian characters, saying they’re ‘from countries no one can spell.’ So, ‘China,’ too difficult to spell, but ‘Solla Sollew’? Spelled like it sounds.”

Colbert’s measured response was the opposite of Fox News’, as he played clips from the conservative network of people complaining about how the decision amount to “cancel culture” run amok. Donald Trump Jr. claimed that he knows “The Cat in the Hat” by heart.

“I’m not surprised Don Jr. loves ‘Cat in the Hat,’” Colbert cracked. “I’ve always believed he can read at a second-grade level. Also, I think his dad calls him and Eric Thing 1 and Thing 2.”

Colbert concluded the bit by reading a Dr. Seuss parody of his own, using a Seussical rhyme scheme to recommend children’s books written by people of color. “There are so many stories, a whole great assorty,” he said. “It’s fun to read books written after the Forties.”