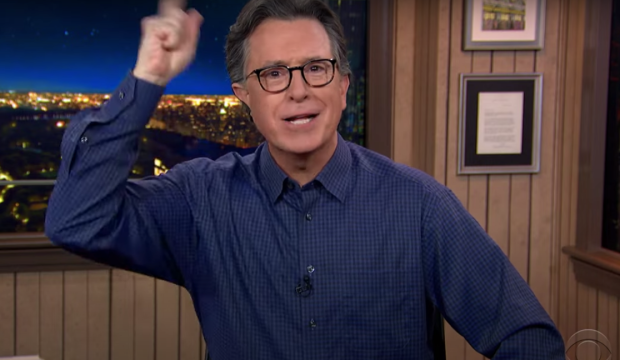 On Thursday, toy company Hasbro announced that the Mr. Potato Head brand would be dropping the “Mr.” in an effort to “promote gender equality and inclusion” — although Mr. and Mrs. Potato Head will still be available, just with “Mr.” and “Mrs.” featured less prominently on the packaging. But that clarification was announced after the news spread as “Mr. Potato Head is gender-neutral now,” which is how Stephen Colbert positively talked about it on Thursday’s “Late Show.”

“Mr. Potato Head is no longer a ‘mister. ’ And not, as I originally assumed, because he finally finished his Ph.D. — his potato head doctorate,” Colbert joked.

Colbert slipped into his old “Colbert Report” voice a little bit to say his next faux-outraged joke: “But if it’s not assigned a gender, what bathroom will it use?”

“Naturally, when this news hit Twitter, the world’s top idiots weighed in,” Colbert continued, citing conservative backlash to the small tweak. “Piers Morgan tweeted, ‘Who was actually offended by Mr. Potato Head being male? I want names. These woke imbeciles are destroying the world.’ Yes, they’re destroying the world. How will children grow up without a strong male potato role model? Won’t someone think of the tots?” Destroying the world! Piers is so dramatic.

“Piers, my buddy, what part of this–” Colbert flashed an image of a lumpy, undecorated Potato Head torso on the screen – “is inherently male to you? I mean, true, the soft curves do resemble my torso, but that’s just because after 11 months of this pandemic, I’m mostly potato myself.”

Piers Morgan may be annoyed, but people whose opinions matter on this sort of thing applauded Hasbro’s decision. “Hasbro is helping kids to simply see toys as toys, which encourages them to be their authentic selves outside of the pressures of traditional gender norms,” Rich Ferraro, GLAAD’s chief communications officer, in a statement to the Associated Press.