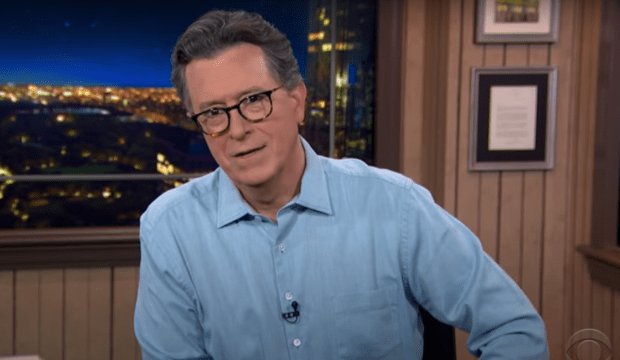 On Monday’s “Late Show,” Stephen Colbert reported on “a dramatic story that moves baseball dangerously close to being newsworthy” – Major League Baseball is pulling the All-Star Game from Georgia to protest the state’s restrictive new voting laws that voting rights groups say will disproportionately harm people of color. This in turn prompted the latest wave of toothless threats of boycotts from conservatives.

Colbert said the new voting laws are the latest salvo in the Georgia GOP’s yearslong campaign to make it harder to vote in predominantly Black communities, “And it’s sure not a great look that Georgia governor Brian Kemp signed it behind closed doors guarded by state troopers, surrounded by white men while sitting under a painting of a slave plantation,” the host said, flashing the photo of the grim scene on the screen. “He then celebrated by watching ‘Gone With the Wind’ and singing all the words to ‘Gold Digger.’”

“It is so blatantly racist that it’s been dubbed ‘Jim Crow 2.0,’” Colbert continued. “2.0, really? Georgia’s passed so many voter-suppression measures, they’ve got to be up to at least Jim Crow Snow Leopard.”

It’s so discriminatory that Major League Baseball on Friday released a statement announcing the league’s decision to pull the game from Georgia, writing “Major League Baseball fundamentally supports voting rights for all Americans and opposes restrictions to the ballot box.”

“You know it’s bad when the organization that includes the Atlanta Braves and the Cleveland Indians says you’re too racist,” Colbert said. “That’s like Matt Gaetz telling you to date your own age.”

And of course, nothing political can happen without a culture war over it, so former President Donald Trump called for a boycott of a long list of companies that have criticized Georgia, including Coca-Cola, the maker of his beloved Diet Coke. Colbert said it was hard to imagine Trump actually giving up Diet Coke.

“If he needs a pick-me-up, he’ll have to ask Don Jr. to share his supply of Coke Classic,” Colbert cracked, flashing a picture of DJTJ looking geeked up.