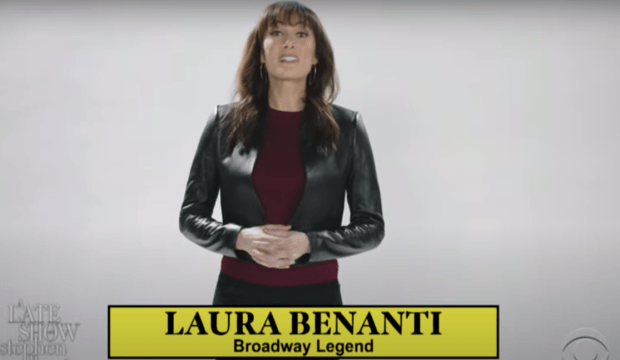 On Monday’s “Late Show,” host Stephen Colbert marked the one-year anniversary of Broadway going dark due to the pandemic, leaving thousands of people out of work. It’s been “525,600 minutes” since Colbert was able to see his Ed Sullivan Theater neighbors. True New Yorker that he is, Colbert invited Broadway stars Laura Benanti and Christopher Jackson onto the show to perform a commercial parody sketch about the dangers of living with an unemployed actor as a way to benefit The Actors Fund, which has distributed millions of dollars in emergency financial assistance to struggling members of the entertainment community.

Benanti – who frequently appeared on “The Late Show” over the past four years as Melania Trump – opened the sketch with a little bit of self-deprecating humor. “Hello, I’m Broadway legend Laura Benanti – and it’s in my contract that they have to let me call myself that,” the Tony-winning actress said. She explained that as the pandemic drags on, people across the country are being forced to live with out-of-work actors. “With no other outlet for their talents, these actors are giving at-home performances the New York Times calls ‘a family’s worst nightmare,’” Benanti said, cutting to Hamilton’s Jackson turning his son’s mundane question asking for help with his homework into a dramatic musical solo. Even pets are affected, as unemployed Lion King actors need cats to lift up into the air and proclaim “Simba!”

It ended with a musical number called “Get the Vaccine,” and a joke that the commercial was paid for by “The Actors’ Desperate Friends, Family, and Roommates Fund.”

Hopefully, Broadway will be back later this year. Until then, you can help support struggling Broadway families at actorsfund.org.