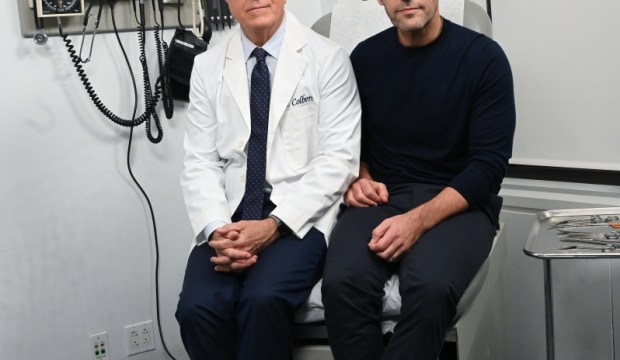 For some reason, People Magazine chose Stephen Colbert to announce 2021’s Sexiest Man Alive. But we’re glad the good people at People did because he took his sacred duties as “official sexiness adjudicator” seriously and devoted a good chunk of Tuesday’s “Late Show” to show the battery of tests the sexiest man candidate must go through before he is crowned Sexiest Man Alive. His testee was the ageless “Ant-Man” star, Paul Rudd.

Paul Rudd performed well in his sexiness interview with Colbert until he showed off his greatest weakness as a sexy guy, which is his “weird foot.”

“I suffer from a thing called ‘big pinkie,’” he said before putting his big pinkie on the table, which made Colbert dry-heave. Fortunately, his honesty overcame how gross it was. Then, Colbert had Rudd show him a “sexy slump,” the casually reclined posture all Sexiest Men Alive do on their covers.

The man once known as Brian Fantana impressed Colbert in the first round of his audition, but how would he do in the next round, the physical inspection of his body?

Colbert performed a kennel club-style investigation of Rudd’s body, including blowing raspberries on his toned belly, which was followed by a “Zoolander”-style photoshoot.

After all that, Colbert, wearing a lab coat, informed Rudd that he “tested negative for sexy.” Rudd took the disappointment graciously and self-effacingly and began to walk out of the room. At which point Colbert began slow-clapping.