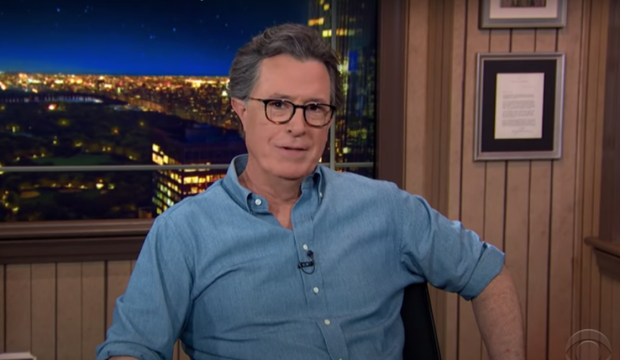 Former President Donald Trump made a now-rare public appearance over the weekend, giving a speech at the North Carolina Republican convention. But his words were overshadowed by his trousers. “He said a bunch of stuff, but nobody paid attention, because it looked like he wore his pants backward,” Stephen Colbert said on Monday’s “Late Show.”

Yes, images from the event seemed to show the former president’s…front area lacking a zipper where one should be. It was very weird. “Either he shares a tailor with a Ken doll, or he spends so much time yanking stuff out of his keister, it just helps to have the zipper back there to make it easy,” Colbert joked.

Colbert said Trump’s pants situation raised a lot of questions, such as, “How did he zip the pants? Was his belt also on backward? And how lucky are we that this man no longer has the nuclear codes?”

Colbert noted that people on Twitter compared Trump’s fashion to Kris Kross, the child hip-hop duo from the ‘90s famous for wearing their pants backwards. “That’s ridiculous,” Colbert said. “Their initials are ‘K.K.,’ which is one less than the ex-president prefers.”

Unfortunately, the fact-checkers at Snopes spoiled the “Trump put his pants on backward” party. The optical illusion was caused by poor image quality, and there are hi-res images from the event where Trump’s zipper is clearly visible. That poor fact-checker had to spend some time looking at and thinking about Trump’s crotch. “Normally when you pay that much attention to his crotch, you get $130,000,” Colbert joked, invoking Stormy Daniels.