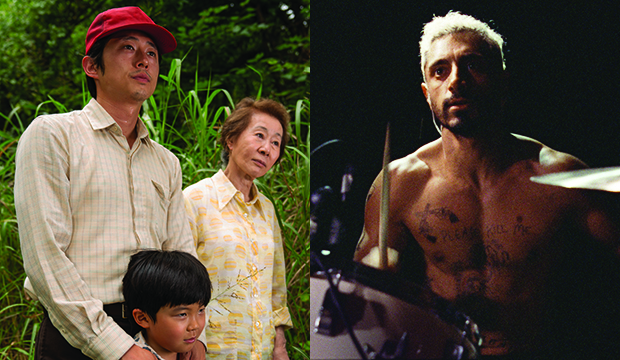 A year after the academy snubbed multiple Asian actors in contention, including the entire cast of eventual Best Picture champ “Parasite,” three Asian performers earned Oscar nominations on Monday. “Minari” stars Steven Yeun and Yuh-Jung Youn are up for Best Actor and Best Supporting Actress, respectively, and Riz Ahmed is nominated alongside Yeun in Best Actor for “Sound of Metal.”

Their bids are historic collectively and individually. Yeun and Youn are the first actors of Korean descent to be nominated in any acting category, while the London-born Ahmed is the first acting nominee of Pakistani descent (reminder: this year is the 93rd Oscars). Yeun is the first Asian-American and first East Asian Best Actor nominee. Ahmed is also the first Muslim Best Actor nominee and would be the second Muslim actor to win an Oscar following two-time supporting actor champ Mahershala Ali (2016’s “Moonlight” and 2018’s “Green Book”). This is also the first time three Asian actors have been nominated concurrently; previously, there had been no more than two in the same year. Yeun and Ahmed are the second pair of Asian actors to be nominated in the same category in the same year since Haing S. Ngor, the late Cambodian doctor-turned-actor, took home the Best Supporting Actor Oscar for 1984’s “The Killing Fields” over the erstwhile Mr. Miyagi Pat Morita (“The Karate Kid”).

All three were predicted to earn nominations. Even so, there was no guarantee any of them would make the cut given the Oscars’ dreadful history of snubbing Asian performers. Japanese actress Miyoshi Umeki is the only Asian woman who’s won an acting Oscar, earning Best Supporting Actress honors for 1957’s “Sayonara.” Among men, besides Ngor, Ben Kingsley, who is British-Indian, won Best Actor for 1982’s “Gandhi.” There’s also Yul Brynner, who won Best Actor for 1956’s “The King and I”; the actor had Buryat, a Mongolic people, ancestry in addition to his largely European background (Russian, Swiss, German), but donned yellowface for a number of his roles, including to play King Mongkut on the stage and in the film version of the Rodgers and Hammerstein classic.

Best Actress is the most dire category — Merle Oberon, who was of Indian descent and hid her background during her career, remains the only one in the category, for “The Dark Angel” from 1935. The supporting categories have seen a handful of Asian nominees. Prior to Monday, the most recent was Dev Patel for 2016’s “Lion” in supporting actor. In supporting actress, Hailee Steinfeld (2010’s “True Grit”), who’s of Filipino descent, and Rinko Kikuchi (2006’s “Babel”) are the two most recent.

Last year, in addition to the SAG-winning “Parasite” cast being blanked, “The Farewell” stars Awkwafina, the first Asian winner of the Best Comedy/Musical Actress Golden Globe, and Zhao Shuzhen were overlooked. Then you have films like “Crouching Tiger, Hidden Dragon” (2000), which got 10 nominations, and “The Last Emperor” (1987), which went 9/9 including winning Best Picture, getting recognized for practically everything except its actors, who were nominated elsewhere; Michelle Yeoh and Zhang Ziyi of the former made BAFTA — Zhang was also snubbed for 2005’s “Memoirs of a Geisha” after hitting all the precursors — and John Lone of the latter was Globe-nominated. Regardless if it’s unconscious or not, those consistent snubs have sent a message that voters have no problem singling out the craftsmanship behind Asian-led films, just not the humans who front them and provide the emotional stakes.

It’d be far too presumptuous to say Yeun’s, Youn’s and Ahmed’s acting nominations are a watershed moment for Asian performers — we’re still waiting for a second Black Best Actress winner after 19 years, and this year is only the second time and first in 48 years that there are two Black Best Actress nominees in one lineup with Viola Davis (“Ma Rainey’s Black Bottom”) and Andra Day (“The United States vs. Billie Holiday”) (there have been 19 Oscar-winning performances from 17 Black performers). The academy has made an aggressive push to diversify its membership in the wake of #OscarsSoWhite six years ago, but there’s still a long way to go.