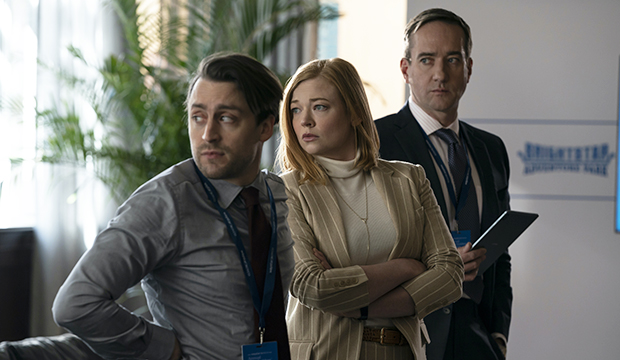 [WARNING: The following story contains spoilers about the Nov. 14 episode of “Succession.” Read at your own risk.]

The Screen Actors Guild Awards have overlooked “Succession” twice now, but that should change this year. The popular HBO drama about the dysfunctional but immensely compelling Roy family is in the middle of its excellent third season, and the Sunday, Nov. 14 episode, “Retired Janitors of Idaho,” is one of the show’s best outings yet. It proves not just why the cast should easily snag a nomination for drama ensemble at the SAG Awards (it’s currently sitting in first place in Gold Derby’s combined odds), but why it should win as well.

The episode — which revolves around the annual Waystar Royco shareholders’ meeting and whether or not the family will retain control of the company after Kendall’s (Jeremy Strong) actions last season — features some of the only moments in Season 3 in which the entire cast is in the same room. This means there are ample opportunities for personalities to clash and ongoing storylines to overlap. And while it’s an impressive feat of direction to capture it all, the pièce de résistance is actually the acting on display.

Halfway through the episode, it’s revealed that Logan (Brian Cox) has contracted a urinary tract infection, and because he has not taken his medication, he’s gone “piss mad.” This puts the future of the company in jeopardy since nothing he’s said can be trusted. And as the Roys and the entire Waystar team watch on and attempt to figure out not just what to do but how long Logan has been out of it, the scene spirals into ridiculous farce.

Karl (David Rasche), naturally focused on the well-being of the company, notes that even if Logan can’t give his speech to the shareholders, “it would be great to get the body up there,” as if they can “Weekend at Bernie’s” (1989) themselves out of this mess. Meanwhile, Hugo (Fisher Stevens) hesitantly interrupts Shiv (Sarah Snook), Roman (Kieran Culkin), Tom (Matthew Macfadyen) and Connor (Alan Ruck) to deliver the news Logan is concerned that a dead cat is under his chair and wants it removed before Rose (his dead sister) sees it. And then everyone bends down to look under his chair. It’s absurd art from start to finish, but the scene really comes together when Kendall arrives unexpectedly just as Colin (Scott Nicholson) rushes out of the room, cradling an empty paper bag as if it actually does contain the corpse of a deceased feline. “What the f— is going on? What is that?” demands Kendall. “That is an imaginary cat, now could you please f— off?” Roman says nonchalantly.

The scene is not just one of the funniest and maddest moments of the season, but it also highlights the overall strength of the show’s large ensemble cast and the actors’ abilities to bounce off one another, upping the absurdity with each passing minute. It’s essentially an exercise one would see in an acting or improv class, in which each hysterical line (“the Hercule Poirot of f—ing piss over here!”) builds off of the previous one, extending the narrative in new and exciting ways. Everyone has their moment in the sun, too, and when you add in the subtle physical comedy of Gerri (J. Smith-Cameron) bending over to look under the chair or Tom slyly stepping between Kendall and Logan to hide what’s going on with the latter, you’ve got the makings of an all-time classic “Succession” episode. The fact everything happens against the very serious backdrop of whether or not the Roys will lose their family company makes it all the better.

But mixing comedy and drama is nothing new for “Succession,” which delights in crossing the line whenever and however it can. Catgate is a showcase for the ensemble cast as much as it is an obvious triumph for writers Tony Roche and Susan Soon He Stanton, and director Kevin Bray. There truly isn’t a weak link in the entire “Succession” bunch, and voters should take notice if they haven’t already.