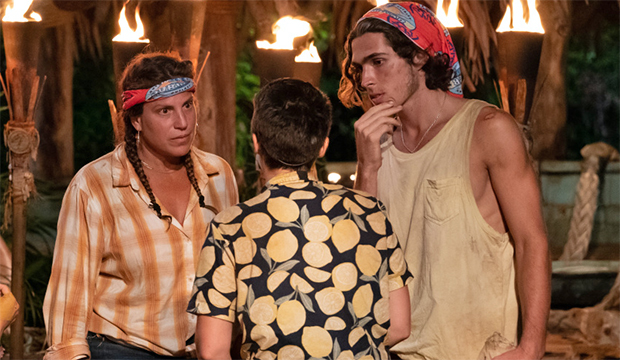 On “Survivor,” there’s nothing worse than being outnumbered at the merge, and that’s exactly what’s happened to the Yase three, aka Xander Hastings, Evvie Jagoda and Tiffany Seely. When their fourth Yase member, Liana Wallace, ditched them for the Campout alliance, that left the yellow trio with a huge numbers disadvantage on a merged tribe of 12 people. At the end of last week’s hectic tribal council, Sydney Segal was sent packing as she received one more vote than Evvie, but can the Yase three survive yet another week?

According to our “Survivor 41” elimination predictions, all three outcasts are in danger of having their torches snuffed by Jeff Probst in Episode 8. Tiffany comes in first place with 11/8 odds, followed by Evvie in second place at 39/20 odds. Danny McCray actually appears in the third place position at 16/1 odds, and then Xander completes the top four most likely eliminees with 25/1 odds. The eighth episode, “Betraydar,” airs Wednesday, November 10 on CBS.

Perhaps the only reason Evvie survived last week’s live tribal council was because of the threat of Xander’s immunity idol. He lied to the group and said he would use it on her, when in reality he’d given it to Tiffany to hold in case Liana decided to play her “steal an advantage,” which she did. Evvie begged Tiffany to use the idol on her, but when Tiffany consulted with Xander, he instructed her not to use it because he felt Evvie would be safe. He was right, by one vote.

Here’s how all of the votes played out last week (remember, Sydney was not allowed to vote since she activated her Shot in the Dark):

It seems likely that the next person eliminated from this 41st season will become the first member of the jury. The seven players who already missed out on that opportunity were Sydney, Genie Chen, JD Robinson, Brad Reese, David Voce, Sara Wilson and Eric Abraham.