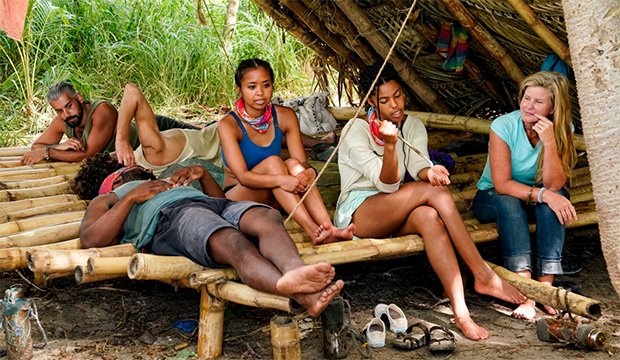 The Final 7 castaways on “Survivor 41” were in disarray after last week’s shocking elimination of Shan Smith. Her fellow alliance members Ricard Foye, Danny McCray and Deshawn Radden had just turned on Shan and Liana Wallace, which left the door open for one of the underdogs — Heather Aldret, Erika Casupanan and Xander Hastings — to pull through. So how did this week’s “Do or Die” twist shake up the game?

SEEEverything to know about ‘Survivor 42’

Below, read our minute-by-minute “Survivor” recap of Season 41, Episode 11, titled “Do or Die,” to find out what happened Wednesday, December 1 at 8:00 p.m. ET/PT. Then be sure to sound off in the comments section about your favorite castaways on CBS’s reality TV show, who annoys you the most and who you think will ultimately join the “Survivor” winners list and take home the $1 million grand prize. Jeff Probst hosts the Emmy-winning series.

8:00 p.m. – “Previously on ‘Survivor’!” In the 10th episode, the Black alliance was torn apart when Shan found out they were trying to target her best friend in the game, Ricard. But when Ricard won immunity, he decided to use the power to take out Shan instead, believing she was the biggest threat in the game. Erika came up with a plan to split the votes between Shan and Liana in case a hidden immunity idol was used, but none were, and so Shan was eliminated from the game on a revote. Who will be booted tonight?

8:01 p.m. – After Shan’s surprise elimination, Liana wanted to hear from Deshawn and Danny why their alliance of four fell apart. Deshawn and Danny explained that it was Ricard’s plan and they found themselves in the minority of the other players and having to vote out Shan with them. Liana exclaimed that now the three of them are in the bottom because of their cannibalization of the alliance. On the flip side, Xander found himself in a new majority alliance of himself, Ricard, Erika and Heather all vowing to stick together with an extra vote and hidden idol in their pockets.

8:03 p.m. – Deshawn was most concerned with how Shan left the game calling him a snake despite it being her number one ally Ricard’s plan to oust her that he just simply went along with after she had thrown his own name under the bus. Ricard explained to him that he and Shan knew they’d eventually come for one another and that Shan knew because Ricard had a target on his back that he had to make a move against her. In that regard, of course Shan respected Ricard for it. From Ricard’s perspective, Deshawn is a player looking to place blame on everyone else instead of owning his moves and so he’s created a sense of paranoia around him at camp. Ricard told Deshawn this the next morning which was a surprising revelation for Deshawn who thought he was simply deflecting attention from himself to Ricard.

8:06 p.m. – Deshawn tried to mend the wounds with Liana, vowing to never write her name down and to continue to work with her going forward. Liana had a different perspective though, instead looking to get revenge against Deshawn for the “snake move.”

8:11 p.m. – Danny pulled Deshawn aside to let him know that it’s the 25th anniversary of his father’s accidental death and that it would be a hard day for him. He opened up about how the stillness of being on the island allowed him a chance to release some of the emotions like anger he’s had toward his father and move forward after the game with a better outlook on his grief.

8:13 p.m. – At the site of the immunity challenge, Jeff unveiled the new game “Do or Die,” a dangerous threat to anyone playing in the challenge. He explained that the first person to drop from the standard immunity challenge of balancing a ball on an increasingly long cylinder would be forced to play in the “Do or Die” game of chance at tribal council that results in them winning and being safe or them losing and going home (with no vote). Because of the risk, Jeff said that it’s up to everyone to decide if they want to compete for immunity or sit out. The players that chose to sit out were Heather and Liana.

8:16 p.m. – Of the five left competing for immunity, Deshawn dropped his ball within seconds and became the “Do or Die” player almost immediately. The other four players made it to the second stage of the challenge where they added sections to the cylinder, making it harder to balance the ball. In this stage, Erika dropped, but the other three advanced to the final stage. After over six minutes of all three guys hanging on, both Ricard and Xander dropped in quick succession meaning that Danny won his first immunity! Jeff made it clear that they should all prepare as if there will be a vote in case Deshawn “lives” in his game of chance. If he does, both he and Danny will be safe from the vote and one of the other five will be voted out.

8:25 p.m. – Back at camp, Deshawn had a good outlook on the “Do or Die” because it gives him the opportunity to save himself without having to worry about votes. He knows he had a huge target on his back and if he wins he’ll be able to have immunity. Danny shared in that relief because of his own immunity and being able to win that on the anniversary of his father’s death against the two players that have won the other immunities. Together they decided that they need to do whatever they can to get Ricard voted out.

8:28 p.m. – Danny went to Xander first, asking him if he also thinks Ricard is the biggest threat. Xander told Danny yes, but knew that if Ricard was out of the game that it would put himself in the hot seat. Xander asked what the alternative would be and they said Liana, but they weren’t sure that Liana was a smart move while they have a chance to get Ricard. Still, Xander wanted to stick with the new alliance of four. Later, Erika came to Xander to have a similar conversation, posing as Danny did that Ricard is good at everything and is a much bigger threat. She agrees with Xander that Liana isn’t trustworthy, but Ricard is bar far the biggest threat to win the whole game and they might not get another chance to make the move.

8:31 p.m. – Xander went to Ricard to tell him that he is the one that Danny and Deshawn are going for, but with Heather the three of them agreed that as long as they four stick together then there’s nothing Danny and Deshawn can do. When Heather left, Xander said they can trust Heather, but Erika is “shady” and “squirmish” and might make a move. That put Ricard on the defense once again, thinking that Erika might be too dangerous.

8:32 p.m. – Liana felt like she was in the worst position, being the easy vote if both Deshawn and Danny have immunity and the other four stick together. She considered that the shot in the dark may be her only option, but if she plays it she’ll lose her vote to potentially take Ricard out. As they prepared for tribal council, Erika found herself as the swing vote between two groups.

8:37 p.m. – At tribal council the first order of business was finding out Deshawn’s fate, but Jeff wanted to discuss the dynamics of the game first. Liana and Heather said that their past performance dictated their choice to sit out of the challenge and not risk the “Do or Die” knowing they’re unlikely to outlast the other players to win anyway. Xander said that he welcomes the twist because it changes the game from their expectations and that’s a good thing. Jeff pointed out that tonight is the last time anyone can use the shot in the dark, making the possible vote even more stressful for the five that would be vulnerable.

8:41 p.m. – When Deshawn got the floor to speak, he backtracked to the previous tribal council to mention his frustration at Shan calling him a snake when it was Ricard’s plan to take her out. This opened the door for Deshawn to make Ricard admit that he told him Shan wanted Deshawn out, which was why he went along with the plan to vote his ally out. The look on Shan’s face hearing this from the jury gave the impression that she might second guess her support of Ricard for the win she declared for him last week. Deshawn said that his passion in the Shan vote comes from the perspective of being a minority race in the game of Survivor and having to write her name down was hard for him because of the intersection of morals and game play. This was probably the first time that most of the other players saw how the four Black players have been perceiving the game and Jeff gave space for Deshawn, Danny and Liana to speak to it. Liana very eloquently spoke about how tough it is to be in the position they are and Danny added that it isn’t just about having an all-Black alliance but about representation. Xander and Heather also spoke about how they didn’t realize the conflict was happening for this group of players and that they realize both their privilege in not having to think about the game that way and a need to ask more questions. Danny and Deshawn gave them thanks for their words and Danny congratulated the entire cast on their allyship that he thinks they’ll all show for one another’s causes after the show airs.

8:52 p.m. – For “Do or Die” Jeff asked Deshawn to pick between three boxes, one of which would have a fire symbol signifying his life in the game and two skulls signifying his elimination. Deshawn chose the left-most box. Before opening that, Jeff opened the far right box, revealing a skull and noting that he now has a 50% chance of remaining in the game and giving him a chance to switch boxes. Deshawn stuck with his gut and kept the box. Jeff opened the box to reveal a flame! Deshawn chose correctly and became safe!

NEXT TIME: Realizing that he and Deshawn are on the bottom, Danny goes idol hunting and Erika might have a new plan to get herself, Deshawn and Xander into the final three.