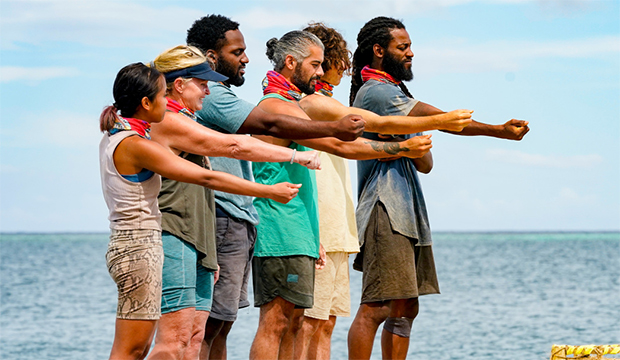 And then there were six. With just one week to go until the “Survivor 41” finale, the Final 6 castaways were all angling to make it into the Final 5. With back-to-back blindsides of Liana Wallace and Shan Smith, there was no telling how the night’s vote might go. Would the remaining members of their once-dominant alliance (Deshawn Radden, Danny McCray and Ricard Foye) stick together, or would the people on the bottom (Erika Casupanan, Heather Aldret and Xander Hastings) rise up?

SEEEverything to know about ‘Survivor 42’

Below, read our minute-by-minute “Survivor” recap of Season 41, Episode 12, titled “Truth Kamikaze,” to find out what happened Wednesday, December 8 at 8:00 p.m. ET/PT. Then be sure to sound off in the comments section about your favorite castaways on CBS’s reality TV show, who annoys you the most and who you think will ultimately join the “Survivor” winners list and take home the $1 million grand prize. Jeff Probst hosts the Emmy-winning series.

8:00 p.m. – “Previously on ‘Survivor’!” In the 11th episode, a controversial new “Do or Die” twist nearly cost Deshawn his life, but he was lucky enough to pick the correct box and stay in the game. Later, Liana ended up receiving the most votes at tribal council, so she followed in Shan’s footsteps by having her torch snuffed. Who will be voted out tonight? Let’s go!

8:01 p.m. – Following the emotional tribal council, Deshawn returned to the camp explaining to the other players that although the elimination of Liana is hard for him, he doesn’t want anyone to feel bad or to feel like they can’t play the game because of race. Instead he acknowledged that it’s a game they’re all trying to win. Xander and everyone supported him for speaking eloquently on the topic at the council, signaling that the tribe was prepared to move on with the game. In an aside, Danny and Deshawn discussed how they had trusted Xander in the vote, but he broke that trust in siding with the others to vote out Liana. Danny then pulled Xander aside to tell him that he doesn’t understand why he let Ricard remain in the game, knowing that he’s the biggest threat. Xander said that keeping him around was important because Ricard is still the big target and without him in the game it would put a target on his own back. Now, Xander is ready to get rid of Ricard.

8:05 p.m. – The next morning, Heather pulled Deshawn aside to ask more questions about the struggle with race he was experiencing on the island. As she said at the tribal council, she genuinely wanted to get to know the other players better and apologized to Deshawn that she wasn’t aware that he had this other layer of the game weighing on him. Deshawn thanked her both for her words at tribal and for continuing to ask questions and listen to him. Later, Erika also thanked Deshawn for being vulnerable and acknowledged that everyone is coming to the game with different expectations and responsibilities. Erika said that she brings the female perspective to the game and feels guilt over voting out a woman, knowing that it’s important a woman wins again. They both agreed that it’s more than race and more than gender, and as Erika said, at the end of the day everyone wants to see “heroes that look like them.”

8:08 p.m. – For the reward challenge they were divided into two teams of three for a diving and basketball competition. As a prize, the choice of grilled chicken and veggies or cake, cookies and candy. On the blue team was Ricard, Heather and Danny against the yellow team Deshawn, Erika and Xander. By the time each player had made their dive for a ball the teams were even. Shooting to the baskets was Danny against Deshawn, but after a couple misses from Danny, Ricard came up to attempt to shoot. Ricard was able to make a basket to tie Deshawn’s one, but then Deshawn banked two more to secure the win. As the winners, the yellow team chose chicken and veggies as their reward in order to properly refuel.

8:18 p.m. – During their lunch, Erika, Deshawn and Xander all agreed that it’s time to vote out Ricard, but Erika wanted to know what would happen after that. Deshawn said that he’d be willing to go to the end with the two of them, but privately he knew that he’d need to see how loyal they’d truly be on this vote.

8:19 p.m. – Back at camp, when Heather and Ricard ducked out of camp, it gave Danny an opportunity to search for a hidden idol that could have been put back into play after Shan’s elimination. Ricard and Heather were back by the time Danny returned to camp, and Ricard noticed that his vibe had shifted into positive energy, making him think Danny had likely found an idol. Heather agreed that something might be off and they should consider it as a possibility when they begin deliberations for the next vote.

8:22 p.m. – The next morning, the day they’d run the immunity challenge and go to tribal, Deshawn told both Heather and Erika that he doesn’t want to see either of them eliminated next. In a conversation with him, Erika considered that she needs to distinguish herself from Heather and that the “chicken reward” alliance might be a good one to move forward with. Deshawn liked the idea, too, because it would mean that all three of them would have different stories to tell at the end of the game with a fair shot pitching to the jury. But actually he just wanted to plant a seed for Erika to start thinking that she can’t go to the end with Heather and that she’ll eventually want to get rid of her.

8:28 p.m. – For the immunity challenge, the final six were tested with an intense obstacle course of getting dizzy unspooling a coil of rope, crossing rope and balancing bridges and then completing a puzzle. Danny got through the first two stages quickest, but everyone was still dizzy by the time they got to the balance beam where they’d have to untie some of their puzzle pieces. Ricard completed that third stage first, reaching the puzzle a short time ahead of Xander and then Erika. Ricard worked quickly, but had to rearrange by the time everyone else was already working on their puzzles, too. Despite a late surge by Deshawn, Ricard’s swap of a few pieces cleared the way for him to add the last few pieces to the puzzle and win, securing his safety on a vote where everyone was prepared to send him home!

8:38 p.m. – After the challenge, Danny and Deshawn knew that the vote would come down to the two of them, faced against a group of people that worked together on the previous vote and failed to eliminate the player they should have. At one point Ricard asked Danny if he found the idol, which he didn’t, but Danny knew that the fact that they think he has an idol could work to his and Deshawn’s benefit.

8:40 p.m. – Around camp, Xander and Heather wrestled with who between Danny and Deshawn would be more likely to beat Ricard at a future challenge. Xander knew that the only way to ensure Ricard doesn’t win every immunity challenge going forward would be to keep all the people the can beat him in the game. Meanwhile, Erika was working hard to convince everyone that Danny should go home when the rest of them want Deshawn to go home. From Ricard’s perspective, he knows that Deshawn has a better relationship with Erika and Heather than Danny and that the three of them could pool together against him.

8:42 p.m. – On the beach, Danny and Deshawn admitted that it would likely be one of the two of them going and essentially thanked each other for their time together in the game. From there, Deshawn knew he had to capitalize on his social game in a way that Danny had not built a foundation for. Deshawn went to Xander and re-confirmed with him that he’s completely loyal to the “chicken reward” alliance with him and Erika. He also told Heather and Erika that he’d want to sit at the end with them because they were all on the same original tribe.

8:48 p.m. – When Deshawn walked into tribal with a smile on his face, Jeff wanted to know why. Deshawn explained that he knows exactly how this is likely going to go: Erika, Ricard, Xander and Heather will split the votes to see if Danny plays an idol and then re-vote after the tie, choosing one of the two of them to go home. He basically said there’s nothing he or Danny can do about it and so he’s just grateful to have made it this far and he’s excited to see it play out. Danny and Deshawn proceeded to throw everyone under the bus for not taking up the opportunity to send “the biggest threat” Ricard home last week, but Erika countered by saying that threat is a relative term in the game.

8:52 p.m. – After Jeff asked Deshawn and Danny what their last words of the game would be if they went home, Deshawn decided to drop the “truth bomb” that Erika told him she won’t be taking Heather to the end because of how similarly they played their game. The move was a pitch to get everyone to vote Erika out instead, but both Ricard and Erika immediately questioned why Deshawn would throw his own game away like that without knowing for sure if he was the one they’d be voting out. In their minds this was going to make it impossible for any of them to want to work with him if he stays, or potentially give them reason to send him home tonight.

8:59 p.m. – After Danny’s departure, Jeff dropped the truth bomb that as the final five they’d leave and head to a new island where they’d start from scratch again with minimal supplies, and over the course of three days they’d have two immunity challenges, two tribals, one fire-making tie-breaker and one winner.

NEXT TIME: At the new beach, Xander is in high spirits convinced he will rise as the others crumble without food or sleep while Erika tells someone she hates Deshawn and promises that it’s going to be a “wild finish.”