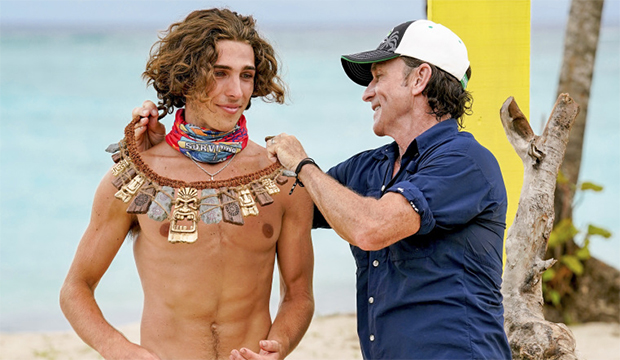 When we offered up our first power rankings for “Survivor 41,” Jeff Probst had just dropped the merge challenge bombshell on the remaining 12 castaways. Then, Shan Smith had positioned herself to win with multiple advantages in her pocket, the foundation of a powerful alliance, and was getting a heavily favorable edit every episode. Now, after Wednesday’s tenth episode, Shan is out and only seven are left to claim the million dollars.

Below we roll out our second “Survivor 41” power rankings of the season, and with our previous frontrunner sitting on the jury, control of the game is up for grabs. Ricard Foye may have made the power move and Deshawn Radden might be the snake, but is there a bigger threat lurking in the shadows? Read our thoughts, comment down below and then update your predictions for who YOU think will win this season.

No one has shown stronger intuition and a better sense of self-preservation than Xander. His back has been up against the wall since the beginning of the game when Liana, Evvie Jagoda and Tiffany Seely had their targets painted on his back at the flailing Yase camp. Since the merge, his name has come up as an option to vote out nearly every time and even when the other players don’t even discuss plans with him he has still known that playing his hidden idol was not needed. His epic blindside that coerced Liana into wasting her advantage to steal his idol is a massive enough tick in his resume to afford him jury votes, but if he actually manages to get to the end then his opening statement to the jury is already written.

Like Erika and Heather, who I briefly discuss later, Deshawn and Danny have been paired together throughout the season. When Deshawn first started entertaining Ricard’s idea to target Shan this week he knew he didn’t need Danny’s support in order to execute it, but he still went to him and made the decision alongside him. That says a lot about how much trust they have built, and a goal I think Deshawn has to go to the final two with Danny. The edit has more or less given the impression that Deshawn is the lead between the two and Danny is simply going along for the ride. When Shan’s torch was snuffed and she called Deshawn a snake, it confirmed that Deshawn had the deeper bonds and was a shot-caller within the alliance. It’s hard to imagine either guy turning on the other at this point, so if we start to believe Deshawn has a shot of winning, we have to assume it’ll be with Danny at his side taking second (or third) place.

I don’t know if any of us thought that between Ricard and Shan it would be Ricard to pull off the ultimate power play, but he did. And Shan gave him major credit for it, publicly stating on her way out that he’s got her million dollar vote. That’s a good thing for Ricard, right? Nahhh, I don’t think so. Shan knew the target on Ricard’s back was already big and she only made it bigger–now every player left in the game is going to see Ricard as the one with the strongest story to tell the jury and the most threatening to leave hanging around. Whether Shan purposefully threw Ricard into the fire or not, the players in the game are going to jump at the chance to have an easy reason to share a common goal of eliminating their biggest jury threat. That being said, Ricard has played an incredibly bold game and we don’t doubt he’ll have some more moves to make before his fire is dimmed.

Liana is the only player left in the game that was blindsided by everyone else’s decision to vote out Shan–and to split the vote with her in case Shan played an idol. That’s going to put Liana on the defense with both Deshawn and Danny, who she may be unwilling to work with again. It’s hard to tell what direction Liana will go, and honestly none of her options look like a promising path for her to make a compelling statement about how she should win. She backed down from the chance to claim a move by taking out Shan and instead let the others have that glory. Now she has no firm allies, no notches on her own belt, and only a desperate need to win an immunity challenge in order to possibly have a say in who goes home next.

We had Heather and Erika at the bottom of our last rankings and it hurts to put them here again, especially considering the fight they’ve levied in order to make their own statement in the game since then, but each of their paths to the end remains incredibly difficult. For better or worse they’ve been lumped together by the other players–so much so that when Erika won immunity, Heather became a de facto target just because it would weaken Erika. Shan was convinced the Erika was the biggest threat in the game and though Shan was right about many things, this isn’t one of them.