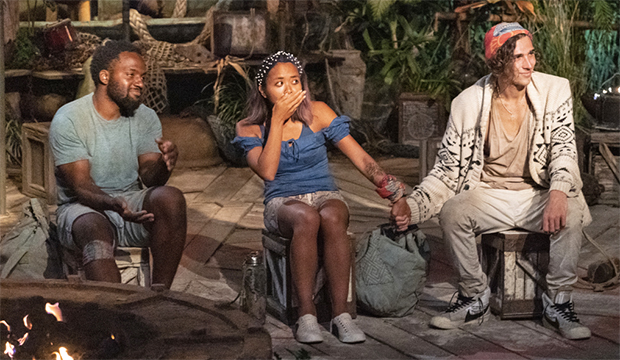 Following the conclusion of the “Survivor 41” finale on December 15, lots of viewers took to social media to complain about the results. A whopping 80% of people voted in our overnight poll that Xander Hastings should have won the $1 million prize, as opposed to actual winner Erika Casupanan, who only earned paltry 14% support from viewers. (Deshawn Radden received 3%, as did the “Someone else” option.) However, it’s possible the show’s edit is to blame for those lopsided poll results.

During the pre-merge portion of the game, Erika was hardly ever shown on camera, thanks in part to her Luvu tribe winning every single immunity challenge. The only thing we knew about the Canadian communications manager was that she was seen as a strategic player by Deshawn Radden and Danny McCray, so much so that they were willing to throw a challenge in order to vote her out. Of course, their plan failed (thanks mostly because Naseer Muttalif won the challenge for the team) and so Erika never had to worry about being a sacrificial lamb. Xander, however, was featured prominently early on as his Yase tribe was seen as underdogs who struggled to survive each week.

At the merge, Erika had her first real “moment” when was sent to Exile Island alone for two days. That’s when host Jeff Probst presented her with a controversial hourglass twist that would reverse time and change the results of the challenge. She smashed the hourglass, which meant the winners were eligible for elimination and the losers were safe, leading to Sydney Segal‘s exit. But following that decision, Erika once again took a back seat in the edit, particularly as more over-the-top personalities started dominating the narrative at the merge.

Erika’s biggest game move, as she explained in the final tribal council, was creating an alliance of outsiders who all saw themselves on the bottom. With the help of Xander, Ricard Foye and Heather Aldret, she was able to take out dominant player after dominant player. Indeed, every time Erika wrote someone’s name down at tribal council, they went home, making her the only castaway in “Survivor 41” with a perfect track record. She also won two individual immunity challenges, found a secret advantage, and got a free ride to the Final 3 — not too shabby. To compare, Xander also won two immunities, found a beware idol, earned an extra vote and diffused Liana Wallace‘s “Knowledge is Power” advantage by giving her a fake idol.

When Ricard mentioned at the final tribal council he wished his fellow jurors had seen the Erika that he saw, it’s almost as if he was coming through the camera and talking directing to viewers at home. Would Erika have been given more screen time if she delivered witty one-liners, or cried after winning challenges, or hummed her own theme song? Keep in mind that this was the first time since Season 1 that the winner was named on the island, and so producers really had no excuse not to focus more on Erika since they knew it was her all along. Hopefully there are lessons to be learned for “Survivor 42,” which begins in March.