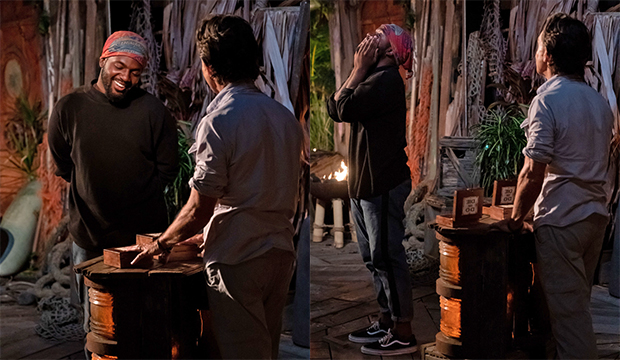 File this one under “can’t please everyone.” The new “Do or Die” twist on “Survivor” was met with mostly negative responses from viewers after its debut in the December 1 episode. In fact, a whopping 63% of people responded in our poll that the guessing game twist was “horrible.” To compare, 23% said they’re “still on the fence” while only 14% admitted they “loved it.” Do you agree or disagree with your fellow “Survivor” fans? See the full poll results below and then sound off down in the comments section.

“Survivor” continues to reinvent itself during this 41st season, first by introducing the “Shot in the Dark” die, then the hourglass smash, and now the “Do or Die” twist. To recap, if a player chose to compete in the immunity challenge and they were the first person to drop their ball, they would have to play a guessing game at tribal council with potentially disastrous results. The person would only have a 33.33% chance of surviving the night, as long as they picked the sole box with the fire emblem. If they chose one of the two boxes with skull icons, they would immediately be eliminated without anyone even voting.

Liana Wallace and Heather Aldret chose not to compete for immunity and thereby didn’t have to risk their lives in the “Do or Die” twist. The other five castaways all competed, with Deshawn Radden being the first out when his ball dropped after only three seconds. Later at tribal council, Deshawn amazingly picked the fire box and spared his life in the game. That meant the tribe voted like normal, and they sent Liana to Ponderosa.

In her exit press, Liana explained a bit more about her feelings on the “Do or Die” twist. “My initial thought is like, ‘I want to go out of this game with people voting me out. I don’t want to take a 1-in-3 chance,'” she told EW. “And we didn’t even know what the percentage chance was. And furthermore, on top of that, I knew in terms of individual immunity challenges, I was often one of the initial people to go out. So the likelihood of me dropping first is high, and also with little balls and stuff like that, I’m terrible at that stuff. So I was like, ‘This is a no for me. You will vote me out of the game, and I’m not gonna take this kind of toss-up.’ And so I felt good about that decision, and I still feel good about it.”

One person who no doubt loves the twist is Deshawn, as it gave him new life in the game and potentially saved him from being voted out. After his blow-up with Ricard Foye about how Shan Smith left the island, Deshawn was on the outs with his tribe. But once the “Do or Die” twist ended up working out in his favor, he wasn’t eligible to be voted out, so he was the first person to advance to the Final 6.