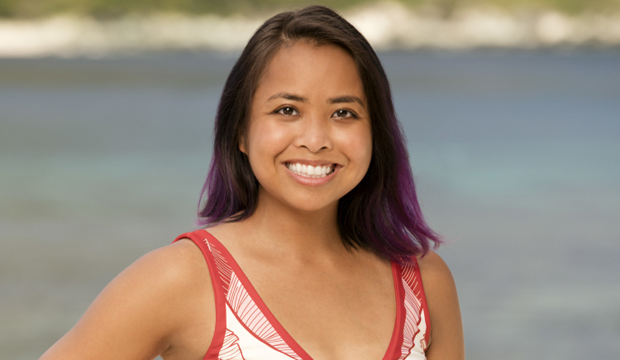 At the end of last week’s episode of “Survivor 41,” Jeff Probst offered a never-before-seen twist to the current inhabitant of Exile Island, Erika Casupanan. If she wanted to “go back in time and change history,” she could reverse the results of the merge challenge by smashing a prop hourglass. That would result in the winners of the challenge now being up for elimination and the losers now being safe. Since Erika was eligible to be voted out, viewers assumed she’d have no choice but to use the hammer when the show returned for Episode 7.

In fact, our reader’s poll results were fairly decisive when asked whether Erika should smash the hourglass. Here they are:

6%: NO — It would ruffle too many feathers

Erika became the first member of Exile Island in this 41st season when she drew one of two grey rocks at the merge challenge (Naseer Muttalif drew the other) and then lost a rock-paper-scissors decision for which of the two of them would be marooned. Upon arriving at her new “tropical vacation resort,” she discovered just minimal supplies — water, rice and a cooking pot. The 32-year-old Toronto native revealed that being alone on a beach was something she “absolutely did not want to happen” to her for one night, let alone two nights.

The next morning, Jeff offered Erika one of the most powerful decisions in “Survivor’s” two decades on the air. Here is what the host told her: “In sending you out here, what they didn’t know is they gave you tremendous power. The black sand at the bottom of this hourglass represents the time that has already passed. This is the history of what has happened in the game. If you want, you can leave the game in its natural state and the events that have happened, happened. Or, if you want, you can go back in time and change history. You have the power to reverse the outcome of yesterday’s merge challenge, so those that have immunity would have it stripped from them. They would have to compete, one of the six of them would be voted out. You and the other five would be safe and guaranteed a spot in the Final 11.”

The six people who believe they are immune at the merged tribal council because they won the challenge are Danny McCray, Deshawn Radden, Evvie Jagoda, Ricard Foye, Sydney Segal and Naseer. A simple smash of the hourglass by Erika would make all six eligible for elimination, however there’d still be an impending individual immunity challenge that could save one person.

“This could burn bridges with people that I do have some type of trust with,” Erika teased at the end of the episode. “People are gonna talk about this one for a long time.” What will she decide to do? Find out when the seventh episode of “Survivor 41” airs Wednesday, November 3 on CBS.