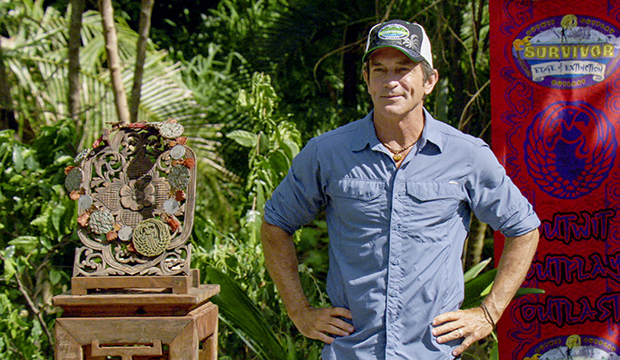 Jeff Probst has been with “Survivor” since day one. The host/producer has appeared in all 596 episodes, he’s sat through every single tribal council and he’s narrated close to 1,000 challenges. But after 40 seasons and two decades on the air, how much more “Survivor” is in Probst’s future? If the four-time Emmy winner decides to retire one day, would you keep watching CBS’s reality TV show? Or would you hang up your proverbial fan torch? How about if he’s replaced by a former “Survivor” castaway — would that keep you glued to your television screen? Vote in our poll below.

Not only is Probst a key figure on-screen, he’s also the show’s biggest cheerleader off-screen. Throughout the current Covid-induced hiatus, he has kept fans updated with what’s going on with the upcoming 41st season. “‘Survivor 41’ is like the monster in a horror movie and if you’re a player, it’s coming for you,” he recently said about the new episodes, which will debut September 22 on CBS. “So either you devour the monster or the monster will devour you.”

Ruth Marie Milliman, the fourth person voted out of “Survivor: Panama — Exile Island” (Season 12), recently told EW that Probst was irreplaceable. “One thing that cannot change is Jeff,” explained the South Carolina resident. “I realize it’s a known fact that Jeff is involved in every aspect of the show, including the interviews and selection process. I think it’s bigger than that. He brings the full range of emotion and energy and it has to be because he loves the project so much. He genuinely gets proud of us, frustrated with us, disappointed with us, and over the moon when a player achieves survivor magic. Those blue eyes and dimples don’t hurt him either!”

Season 41 reportedly wrapped up filming in May 2021 in Fiji after only 26 days (instead of the normal 39 days). For the first time ever, the title does not have a subtitle — instead it’s officially called “Survivor 41.” It’s long been a tradition that two seasons film back-to-back, and that was the case this year as the 42nd season began production on the island soon after the 41st winner was crowned. That’s right, we’re hearing that that winner was revealed on the island, as opposed to months later in a live studio audience. Blame Covid.

Are you excited for “Survivor 41” to kick off this September with Probst once again at the helm? Who are some former “Survivor” castaways that could potentially step in for Probst if he ever decides to retire? Be sure to sound off down in the comments section.