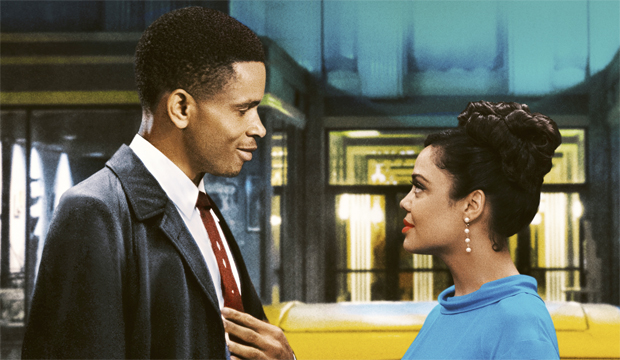 If Gold Derby’s predictions are true that “Sylvie’s Love” will win the Emmy for Best TV Movie, it would be a first for Amazon Prime Video. Previously the streamer contended once in this category for “King Lear” (2019), losing to Netflix’s “Black Mirror: Bandersnatch.” The new telefilm stars Tessa Thompson as Sylvie, a 1950s record store worker who has dreams of becoming a television producer. She soon falls in love with Robert (Nnamdi Asomugha) and they begin a years-long, on-again/off-again relationship.

Director/producer Eugene Ashe also wrote the film that originally had its world premiere at the Sundance Film Festival. That’s where Amazon acquired distribution rights, eventually releasing in on December 23, just in time for the holidays. At the Critics Choice Awards, “Sylvie’s Love” was nominated for Best TV Movie and Thompson for Best Actress. It also won the Image Award for Ashe for Best Director.

We chatted last winter with costume designer Phoenix Mellow, who said that the opening shot of Sylvie wearing an eye-poppingly blue dress in 1960s New York was the “director’s obsession.” She revealed that Ashe “talked about this the moment that we met about the project, and also reading the script you know that the way that it’s written just has that ‘Breakfast at Tiffany’s’ moment, where you’re just waiting to see the hero.”

As the film progresses, Sylvie succeeds in her career by living her dreams of working in television production. Her wardrobe understandably gets more sophisticated, confirmed Mellow. “I definitely wanted to show the progression of Sylvie’s costumes and the changing time in her life, like have a very distinct 1957 look and then have her 1962-63 look to be much more sophisticated and professional.” The designed added, “She’s now a mother, she’s a working woman. She still has all the same strengths that she did in the 50s when they were first falling in love, but at this time in her life she really knows herself.”

As for the other Emmy Experts, four of them predict a victory for HBO’s “Oslo,” a retelling of the secret negotiation of the Oslo Accords. They are: Tim Gray (Variety), Ken Tucker (Yahoo), Peter Travers (ABC) and Anne Thompson (Indiewire).

And the last Emmy Expert — Lynette Rice (Ent. Weekly) — forecasts that “Uncle Frank” will prevail. This Amazon dramedy from multi-hyphenate Alan Ball stars Paul Bettany as a gay man who confronts his past while on a road trip.

Make your Emmys predictions at Gold Derby now. Download our free and easy app for Apple/iPhone devices or Android (Google Play) to compete against legions of other fans plus our experts and editors for best prediction accuracy scores. See our latest prediction champs. Can you top our esteemed leaderboards next? Always remember to keep your predictions updated because they impact our latest racetrack odds, which terrify Hollywood chiefs and stars. Don’t miss the fun. Speak up and share your huffy opinions in our famous forums where 5,000 showbiz leaders lurk every day to track latest awards buzz. Everybody wants to know: What do you think? Who do you predict and why?