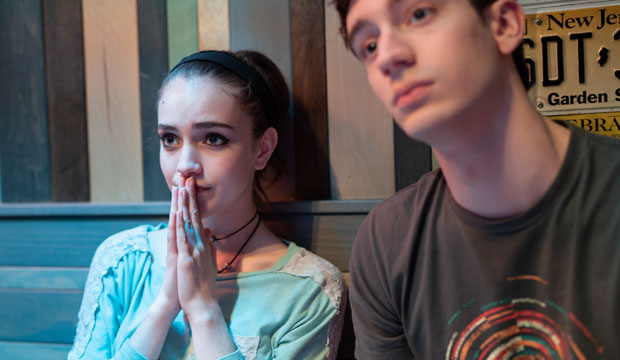 Sidney Flanigan isn’t the only actor from the Focus Feature release “Never Rarely Sometimes Always” earning nominations from critics awards. Talia Ryder, who plays Skylar, the cousin and best friend of Flanigan’s Autumn, is also on the board with some bids this season.

This is Ryder’s feature film debut as an actress, but there is confidence in her portrayal of Skylar, a teenager who is protective of the more vulnerable Autumn as she helps her find the resources she needs to get an abortion. Theirs is the most significant relationship in the film as they share an unspoken bond while navigating a perilous journey to New York City.

Skylar is keenly aware of her surroundings, knowing how to operate within a patriarchal society and acting selflessly to protect her cousin. Ryder has a warm presence and, in tandem with the screenplay by Eliza Hittman, creates a fully fleshed-out character even with relatively limited screen time.

While an Oscar nomination might seem like a tall order considering her more famous competition (including past Oscar champs Olivia Colman and Ellen Burstyn), Ryder could continue racking up kudos from critics and potentially earn recognition from the Independent Spirit Awards. The indie sensibility of “Never Rarely Sometimes Always” should make it a top contender for nominations there as it was at the Gotham Awards.

And a new performer like Ryder fits the mold for Film Independent. Consider recent examples like Zhao Shuzhen in “The Farewell” and Mya Taylor for “Tangerine,” who both won the Spirit Award for Best Supporting Actress for their film debuts. Landing a nomination at those awards and beyond would be a major acknowledgment for Ryder, which she could carry into another potential breakthrough role for her in Steven Spielberg‘s upcoming adaptation of “West Side Story.”