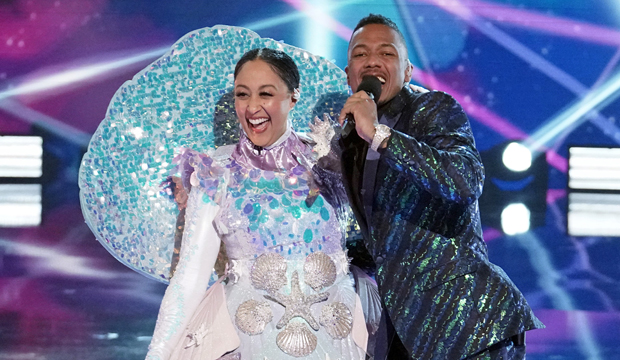 The Super 8 hit the stage in a two-hour episode of “The Masked Singer” on Wednesday night before a pair mystery performers were eliminated from the reality TV competition. First Grammy winner Bobby Brown was revealed as the Crab and then Daytime Emmy winner Tamera Mowry-Housely was unmasked as the Seashell. It wasn’t a very good day at the beach! Tamera’s final performance was “I Think We’re Alone Now” by Tiffany.

“I think you knew the moment I pinched your cheek,” Tamera joked with host Nick Cannon during her unmasked interview. After being complimented for her great performances each week, Tamera raised her hand and asserted, “You guys! Holy crap! I haven’t been on a stage like this, singing, in over 20 years. So to have made it this far means a lot because I have heard those voices back there. And I was like, what the hell?!”

“You’re just one of those kinds of talents though,” panelist Robin Thicke commented. “Your personality, you glow, your effervescence and you can do anything you want in your life.” Robin and his fellow panelists Jenny McCarthy and Ken Jeong were all stumped by Tamera’s performances. Robin guessed the Seashell was Haylie Duff while Jenny went with Vanessa Hudgens and Ken said Sarah Silverman. Only Nicole Scherzinger was clever enough to piece the clues together and correctly name Tamera, but her first impression guess was Hillary Duff so she didn’t earn any points towards the Golden Ear trophy.

Although Tamera was able to fool most of the panel, there were plenty of hints in the Seashell’s clue packages pointing them towards her true identity. The chicken clues were a nod to Tamera’s role in the movie, “The Hot Chick.” The bottle of vitamins in Seashell’s package was a clue to Tamera’s starring role in the TV show, “Strong Medicine.”

The contestants advancing to the Spicy 6 are Black Swan, Chameleon, Piglet, Robopine, Russian Dolls and Yeti. Tamera was preceded by seven singers unmasked before her: Kermit the Frog as the Snail, Caitlyn Jenner as the Phoenix, Danny Trejo as the Raccoon, Logan Paul as Grandpa Monster, Nick Cannon as the Bulldog, Mark McGrath as the Orca and Bobby Brown as the Crab.