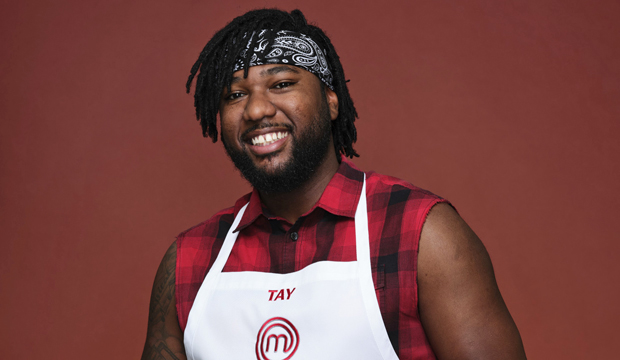 The July 21 episode of “MasterChef: Legends” ended with an emotional shocker as Tay Westberry was eliminated due to a technicality. This week’s task was to create a California-inspired dish using five ingredients: Santa Barbara prawns, sea urchin, wasabi, avocado and grapefruit. Unfortunately, Tay forgot his urchin butter in the refrigerator, so Gordon Ramsay, Aaron Sanchez, Joe Bastianich and special guest judge Jonathan Waxman had no choice but to cut him from the Top 10.

“It breaks my heart to send you home,” Gordon told the 29-year-old radio host from Nebraska. “Tonight’s challenge was about using five ingredients and this is a competition, so we have to abide by the rules.” In truth, the judges thought Joseph Manglicmot made the worst dish of the week, but he “dodged a bullet” because of Tay’s oopsie. The other home cook in the bottom three was Alejandro Valdivia.

A teary-eyed Joe told Tay, “I don’t know what to say. This is difficult for me because I’m a real believer in food first. The fact that you have to go home on a technicality, I don’t feel great about it, I have to tell you.”

Tay explained to the judges that his journey on “MasterChef: Legends” had been a “complete blessing.” He then got emotional when Gordon offered him a free week at any of his kitchens so he could learn cooking skills firsthand from the renowned chef.

In his exit interview, Tay stated, “I’m disappointed to get eliminated on something so simple. But like, I’m leaving ‘MasterChef’ proudly. Whoever thought this Black redneck from Omaha, Nebraska would be in the Top 10 on ‘MasterChef’? I got to sit in front of some of the most amazing chefs in the world and I cooked my ass off. Nobody can take that away from me. I won a baking challenge [with Legend Sherry Yard]. Those are the feelings and emotions you can’t ever replace. I’m walking out of here shoulders back and head high, man. I made it, I did it!”

The three best chefs of the week were Suu Khin (who won the challenge), Abe Konick and Autumn Moretti. They all sailed through to the Top 9 along with Joseph and Alejandro and the four “safe” chefs, Anne Hicks, Kelsey Murphy, Lexy Rogers and Michael Newman. Who are you rooting for to win Season 11 of “MasterChef”? Sound off down in the comments section.