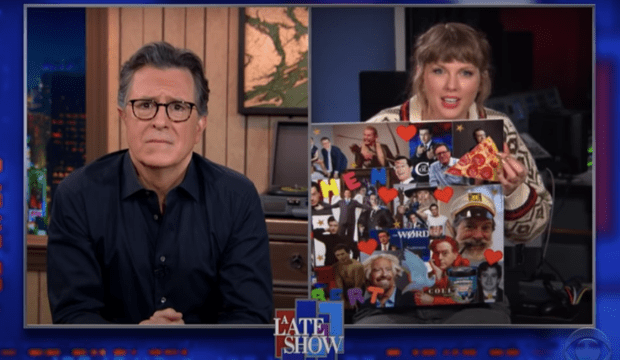 Fresh off the re-release of her 2008 breakthrough album “Fearless,” Taylor Swift appeared on Tuesday’s episode of “The Late Show” to tell host Stephen Colbert the “secret” behind one of the record’s tracks.

Colbert said that he’s been a fan of Swift’s ever since she sent a signed CD to “The Colbert Report” in 2009. She and her family, in turn, have been fans of his even longer than that. There’s a song on “Fearless” called “Hey Stephen.” On “The Colbert Report,” Colbert said that the song was about him. Now, 12 years later on the “Late Show,” Colbert asked if his theory was correct — a question that allowed Swift to reveal the “true” identity of “Stephen.”

The sketch began with Colbert asking Swift if the song – which contains lyrics like “‘Cause I can’t help it if you look like an angel, can’t help it if I wanna kiss you in the rain” – is about him. She denied it. “I recorded that song in 2008, I think I was like 18,” she said.

“Right, and I was also a younger age,” Colbert said.

“Right, you were probably about 44 years, 179 days old, give or take several hours,” she replied. As she said, she’s a big fan.

“Are you sure ‘Hey Stephen’ isn’t about me?” he asked again. “It’s just the power of music, Stephen,” she said. “Good songs make you feel like it’s about you.”

He said it’s definitely a good song, and she said it was fun to record again. (Swift has taken to re-recording her entire back catalog in order to personally own the master recordings.) In order to get in the “right headspace” to tap back into her teenage feelings from when she wrote it, she found her old mood board, which was all pictures of Colbert.

He said it really seems like “Hey Stephen” is about him, which she continued to deny. “‘Hey Stephen’ is not about you any more than my album ‘1989’ is about that year you spent waiting tables on the lunch shift at Scusi, an Italian restaurant in the River North area of Chicago that by the way serves a really incredible slice of pizza,” she deadpanned.

By this point, Colbert demanded to know if the song was really about him, and she finally gave and revealed who the song is really about: Stephen King.

“He’s amazing,” she said of her adoration of the 73-year-old horror author. “‘The Dark Tower’ series changed my life, plus ‘The Shining,’ ‘The Stand,’ and don’t even get me started on his short stories. Absolutely luminescent.”

Songwriting is about the details, she explained, and if she were writing about Colbert, it would really be about him. It would go something like, “‘Hey Stephen, I love you on the TV, and all the stuff you did on ‘The Daily Show’ and that time you were on ‘Law & Order,’ you’re 5-foot-11, your middle name’s Tyrone, your Social Security number is 330–,” at which point he cut her off.

“No matter how much you say that ‘Hey Stephen’ isn’t about me, I keep getting the strong feeling that it is,” he said.

“That seems like a you thing, for you to sort of process,” Swift said. “But the thing about that feeling that maybe you should address within yourself; I think it’s something that you should process and then take the feeling that you’re feeling and just ‘Shake It Off.’ Right? But that song is about you.”

Then her phone rang, and it was Stephen King. She had to take it.

As of press time, Stephen King has not responded to the revelation.

CMT Awards Video of the Year finalists: No solo women are welcome