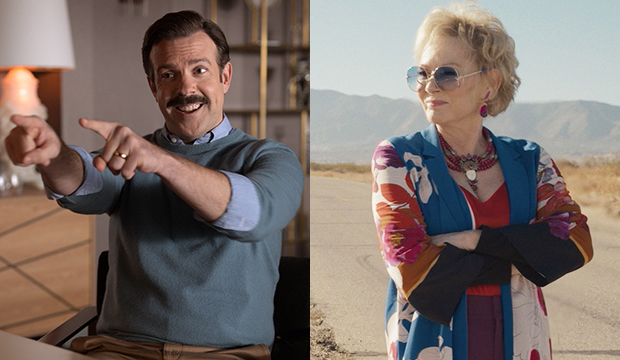 Fret not, Comedy Series champion “Ted Lasso,” your losses in both writing and directing put you in very accomplished company, including three-time series victor “Veep.” Though our exclusive combined odds had the Apple TV+ series winning the directing prize for the Zach Braff-helmed episode “Biscuits” and the writing award for the “Pilot” penned by Jason Sudeikis, Bill Lawrence, and Brendan Hunt, “Hacks” ultimately won both Writing and Directing for its pilot episode “There Is No Line” written by Lucia Aniello, Paul W. Downs, and Jen Statsky and directed by Aniello. Our readers ranked the episode second in writing and and third in directing, respectively.

Even though “Ted Lasso” had a solid chance at those two awards, recent history foreshadowed its losses. In both 2016 and 2017, “Veep” lost the writing and directing awards because of vote-splitting. In 2016, when “Veep” won its second series trophy, it had three episodes nominated in directing – “Morning After,” “Mother,” and “Kissing Your Sister” – and two in writing – “Morning After” and “Mother.” Despite the popularity of the series, it wasn’t able to hold off the one nominated episode of “Transparent” in directing or the one nominated episode of “Master of None” in writing.

The exact same situation played out the following year, when “Veep” won its third series prize but again missed out on the directing and writing awards. For its sixth season, the show had three episodes nominated in directing – “Georgia,” “Justice,” and “Groundbreaking” – and two nominated in writing – “Georgia” and “Groundbreaking.” Again, though, the comedy juggernaut fell prey to vote-splitting, losing directing to the single nominated episode of “Atlanta” and writing to the single nominated episode of “Master of None.”

The Guilds were also a helpful clue to these two “Ted Lasso” losses. Its pilot lost out at the Writers Guild of America to the pilot of “The Great,” while “Biscuits” and “The Hope That Kills You” lost to the pilot of “The Flight Attendant” titled “In Case of Emergency.” Despite these two losses, “Ted Lasso” still took home an impressive four awards on the main telecast for Series, Actor (Jason Sudeikis), Supporting Actress (Hannah Waddingham), and Supporting Actor (Brett Goldstein), plus three additional prizes at the Creative Arts last weekend.