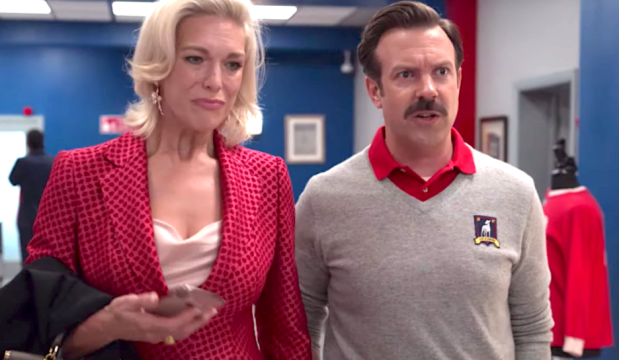 Apple TV+ has finally spilled the tea on the return of “Ted Lasso.”

The awards favorite will return for its second season on July 23, less than a year after the show’s widely acclaimed first season made its debut on the streaming service. Apple TV+ made the announcement on Tuesday and debuted a new teaser trailer for the upcoming season:

Starring Jason Sudeikis as an American football coach who takes over a small-town English soccer club, “Ted Lasso” has stormed through the early part of the television awards season. Sudeikis won accolades from the Golden Globes, Critics Choice Awards, and Screen Actors Guild Awards in the Best Actor category, while the series itself has scored nominations from the Writers Guild, Producers Guild, and Directors Guild.

It’s expected that “Ted Lasso” will also dominate at the 2021 Emmys, as the show is heavily favored in the Gold Derby odds in the Best Comedy Series category as well as Best Actor for Sudeikis and Best Supporting Actress for Hannah Waddingham. “Ted Lasso” could also match “Modern Family” with four separate nominations in the Best Supporting Actor in a Comedy Series category.

Emmy nominations are announced July 13, while final voting kicks off on August 19 and runs through August 30. Voters will be midway through season 2 by that point. This savvy scheduling was a winner for HBO shows like “Sex and the City” and “The Sopranos,”  which had new seasons on the air while TV academy voters were casting their final ballots.

“Ted Lasso” has been one of the buzziest hits for Apple TV+ since the streaming service launched in 2019, alongside shows such as “The Morning Show” and “Dickinson.” The comedy has already been renewed for a third season.

For 'WeCrashed' star Jared Leto, playing Adam Neumann was 'the opportunity of a lifetime' [Exclusive…

Andrew Baseman ('Severance' set decorator): The 'one desk floating in this sea of green carpet and white…

Showrunner Kerry Ehrin on incorporating the COVID-19 pandemic into 'The Morning Show's' 2nd season: 'You…

Tom Howe ('Ted Lasso' composer): 'I tried to come up with a theme for each character' [Exclusive Video…

Christopher Gattelli ('Schmigaddon!' choreographer) on paying 'homage' to dance favorites: 'So much of…

Emmy Experts Typing: Is 'Hacks' about to attack the comedy categories?