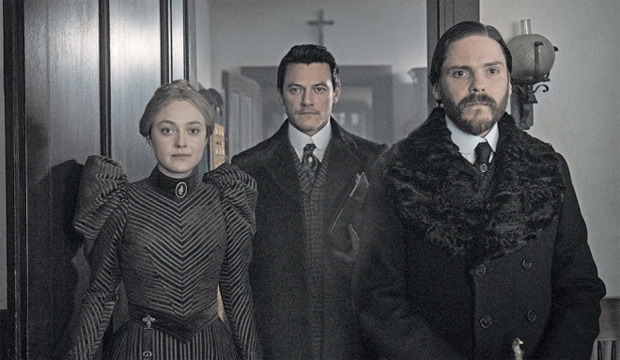 Two years ago, TNT’s red-hot program “The Alienist,” based on Caleb Carr‘s novel, earned a pair of Golden Globe nominations for Best Limited Series and lead actor Daniel Bruhl. “The Assassination of Gianni Versace” ended up taking home the trophies for series and lead actor Darren Criss, but now “The Alienist” has a chance to redeem itself with it second season, “Angel of Darkness.”

Of note, this time around the show will compete in the drama categories at the Golden Globes, as opposed to the limited series races where it previously found success. The Hollywood Foreign Press Association loves these kinds of lavish productions with A-list actors and film-quality crafts, so don’t count out “The Alienist” just yet, even though it faces stiff competition in Best Drama Series from “The Crown,” “The Mandalorian,” “Lovecraft Country,” “Ozark” and “Perry Mason.”

Set in 1890s New York, Bruhl returns in the second season as Laszlo Kreizler, a psychiatrist who finds himself solving grisly crimes with reporter John Schuyler Moore (Luke Evans) and detective Sara Howard (Dakota Fanning). These eight episodes focus on the investigation of several babies who have gone missing, which eventually leads our protagonists to a young nurse named Libby Hatch (Rosy McEwen) at Lying-In Hospital.

“The Alienist: Angel of Darkness” aired on TNT last summer, more than two years after the first season wrapped up its successful run. Behind the scenes, Emmy nominee Rudy Mance returned as the show’s costume designer who had the monumental task of creating hundreds of period costumes. “To get the chance to come back two years later and sort of have the foundation laid out for each of these characters and see and know where they came from, and then to put my own spin on it and push it forward two years, it was sort of a perfect storm,” Mance revealed in our recent interview.

Bruhl and Evans compete in Best TV Drama Actor, where the odds-on nominees are predicted to be Matthew Rhys (“Perry Mason”), Jason Bateman (“Ozark”), Jonathan Majors (“Lovecraft Country”), Josh O’Connor (“The Crown”) and Pedro Pascal (“The Mandalorian”). Bruhl is a two-time Golden Globe nominee for “The Alienist” and “Rush,” while Evans is looking for his first bid.

As for Fanning, she contends in Best TV Drama Actress against the likes of Olivia Colman (“The Crown”), Laura Linney (“Ozark”), Jurnee Smollett (“Lovecraft Country”), Emma Corrin (“The Crown”) and Sarah Paulson (“Ratched”). Though she’s never been nominated (yet) by the Golden Globes, Fanning does have two Critics’ Choice Awards for Best Young Actress for “I Am Sam” and “War of the Worlds.”