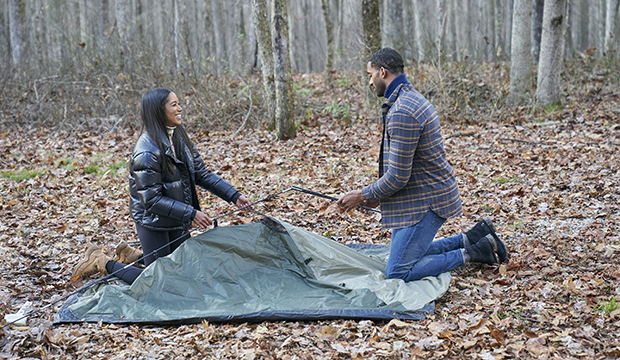 Narrowed from a field of 38 contestants, Bri, Michelle and Rachael, the final three vying for Matt James’ heart on “The Bachelor,” came closer to the finish line this week with the allure of fantasy suites.

After conversing among each other about the magnitude of their hometown dates last week, the final three were greeted by Chris Harrison, who reminded them to use their overnight dates wisely by asking meaningful questions pertaining to their potential future with Matt. At the same rate, a very conflicted Matt admitted he’s been guarded in his past. He didn’t want to carry negativity into a future relationship, so he invited his dad to speak with him about his next steps.

When Matt’s dad arrived, he told Matt he needed to let go of what happened in the past and continue to open up. But Matt said it was difficult to do so because he felt his dad wasn’t available to have important conversations with him since he started other families. Above all, Matt simply didn’t want to make the same mistakes. However, the conversation grew heated when his dad, acknowledging he was to blame, recalled a time when Matt’s mother was not around to take care of him and his brother, reiterating the idea that nobody is perfect.

“We make mistakes in our life,” he said. “We’re going to fall. It’s how you get up.” Ultimately, Matt, shedding tears, realized he needed more than a dad who occasionally bought him shoes and pizza. “I don’t know what it was like to grow up in Africa without a dad like you did, but I know what it’s like here to grow up without a dad and a bunch of other stuff that hardens my heart and closes me off,” he said. “I’m trying to address all those things now so when I get into these relationships it’s not something that rears its head down the road. … I want you to be a part of any relationship I’m in going forward and in my kids’ lives going forward because you’re my dad. As much as I missed out on in our relationship, there’s still a lot of life for both of us to live. And I forgive you. I’m not holding grudges. I just want us to move forward.” And with that, Matt and his dad embraced while understanding there was still room to grow.

SEE ‘The Bachelor’ episode 9 recap: The women tell all and (sort of) apologize

Next, Michelle began her date with Matt, which kicked off with a Pennsylvania Dutch spa day, complete with butter, oatmeal and a milk bath. Afterward, she opened up about her hope of wanting to stay in love — not necessarily just falling or being in love. She looked to her parents for an example of how to intentionally make that work. Over dinner, Matt informed her of his conversation with his dad. At the end of the night, she agreed to the fantasy suite. “Being able to know I’m in love with Matt is comforting because he is the one I’m supposed to spend the rest of my life with,” she said. “I’ve known for a while of the ending I want to come out of this, which is hopefully a proposal and it’s finally within reach. … I want things to be more intimate. I’m ready for things to get serious. I’m ready to have those deep conversations.” She also told him she loved him.

The second date card went to Bri, who was still concerned about receiving the final rose last week. Camping was central to Bri and Matt’s date at the outset, but both took it in stride, especially Bri who admitted she wasn’t outdoorsy. Bri also acknowledged it was emotionally tough seeing Michelle return from her date since it had become difficult to compartmentalize her feelings. Later in the evening, Matt informed Bri about his intense conversation with his dad. Bri felt she wanted her estranged dad in her life as well moving forward. She also said she was in love with Matt and agreed to the fantasy suite.

Finally, Rachael, extremely nervous and doubtful of her place among the final three, approached Matt with a heavy heart, which was fully apparent. Even when she and Matt participated in a ceramic exercise her enthusiasm was low and her heart didn’t really seem to be in the activity. Telling Matt that the events of the week were “unbearable” for her, Rachael admitted how difficult it was to know Matt had been intimate with the other women. “There’s no easy way to go about these next two weeks,” he said. “But it’s necessary so at the end of this you can have 100 percent assurance in where I’m at with you and us, and as respectfully as I can go about it, do the same with everybody.” That evening, Rachael seemed to be much more at ease and less troubled. With fireworks ablaze outside their window, she and Matt settled in for a night in the fantasy suite.

At the rose ceremony, Matt chose Michelle and Rachael. It was a surprising blow considering Bri seemed to have such a strong kinship with him from the start, including similar upbringings. “I can’t be upset or be angry, but I can be really sad and disappointed and hurt,” she said. “Obviously I gave up a lot to be here.” Next week, the season finale concludes Matt’s journey with appearances from his mom and brother. Matt also appears to have a total tearful meltdown so who knows what the end result will be.