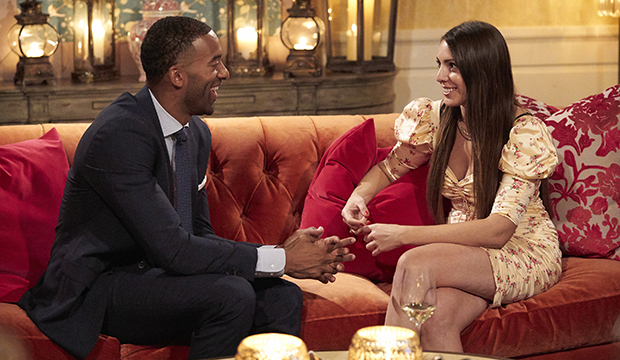 “The Bachelor” kicked into gear as Matt James entered his first week of dates. After an opening, lingering shot of Matt showering, the ladies were seen excitably settling into their gorgeous surroundings at the Nemacolin Resort in Farmington, Penn. Chris Harrison congratulated Abigail on receiving the first impression rose and announced there would be three dates: one group date and two one-on-ones. There was also a hitch: due to the record number of ladies, not everyone would receive a date.

Bri, a communications manager from San Francisco, received the first one-on-one and quickly generated backlash from Victoria, the “Queen” from Los Angeles who didn’t understand why everyone wasn’t as mad as she was. “I think the girls that are happy for Bri are all fake as sh–,” she said. “The reality of the situation is that we’re all here to date Matt. We’re not here to be in a sorority.”

After a fun, muddy ATV excursion, which included a rollover (no worries — no one was injured), Matt and Bri enjoyed chatting in a wood fired hot tub. Of course, the sole purpose for the hot tub was to spotlight Matt’s endless abs and expert woodchopping ability (he scored an A+ in both regards). Nevertheless, the sparks within their connection were evident, especially as Matt didn’t waste any time leaning in for a passionate kiss. “I feel extremely lucky,” he said. “I’m on a journey to find what I’ve been missing. Someone that I could share my life with and someone to help make that relationship part of my life whole. I’m hoping to find that possibly with Bri.”

That evening, Bri discussed her upbringing, particularly her closeness with her mother and estranged relationship with her father. Matt could relate due to his estranged relationship with his dad. Due to the fact that Bri opened up over dinner and was adventurous during the date overall, Matt gave her a rose. The evening ended with fireworks, further agitating the ladies.

Back inside the resort, the ladies grew tired of Victoria’s persnickety attitude. “There’s just a lot that she does that’s off-putting,” said Alana, a photographer from Toronto. “I have sympathy for her because you don’t want someone to be getting dumped on one hand, but on the other stop being an idiot.” After being labeled negative and rude, Victoria didn’t hold her tongue. “I think I’m authentic and real,” she said. “So, for multiple people here to insult my character…”

She proceeded to narrow her wrath toward her roommate Marylynn, an event coordinator from Studio City, Calif. “I think Victoria is dealing with a lot of her own insecurities right now,” she said. “The last thing I want is drama with somebody like that.” Afterward, Victoria offered a diagnosis. “Marylynn is psychologically disturbed — literally. I’ll sleep on a couch rather than share a room with Marylynn. I don’t even care. I’m gonna be with Matt and the rest of it is ridiculous.” And with that, she slept in the lobby.

The next day, the large group date consisted of Chelsea, Serena P., Abigail, Sydney, Illeana, Kristin, Lauren, Jessenia, Serena C., Kit, Kaili, Katie, MJ, Mari, Pieper, Rachael and Victoria. In spite of rain upon arrival, spirits were high among the group nonetheless for an exciting photoshoot overseen by photographer Franco Lacosta. Just in the nick of time, the sun came out as Matt joined each woman, dressed in white wedding gowns, for a colorful array of striking poses. However, the date took an odd turn when Victoria, seeking attention once again, stepped into the spotlight, complete with a garter belt.

Soon after, Chris arrived, cutting short the time some expected they would have, including Rachael, a graphic designer from Cumming, Ga., who made somewhat of a spiritual connection with Matt last week. Chris said Matt was looking for someone who would truly fight for his heart. And so, two teams would have to compete in a down-and-dirty forest match to win alone time with him. Quickly taking scissors to their gowns in order to run, the ladies gave their all throughout the hilarious competition involving lots of paint and a wedding cake. The victory went to the Red Team consisting of Jessenia, Kaili, Kit, Lauren, MJ, Pieper, Serena P., Sydney, and Victoria. The MVB (Most Valuable Bride) trophy went to Mari even though she was on the Gold Team.

At the after party, Lauren, a corporate attorney from Miami who had been under the radar leading up to this point, finally had Matt all to herself. She revealed she was looking for someone who not only was a man of faith but someone who was loyal. Matt, a Christian, loved hearing her perspectives, especially about religion. Elsewhere, Jessenia, a social media marketer from San Antonio, opened up about infidelity in her past relationships, while Victoria acknowledged her insecurities, an unexpected move. “I’m going to challenge you to continue to own who you are because it’s beautiful,” Matt told Victoria. In the end, he gave Lauren the rose, having been pleased that they shared similar values.

The next day, Sarah, a broadcast journalist from San Diego, had a one-on-one with Matt, which began with a picturesque biplane ride. The tight quarters certainly brought them closer. “This plane is so tiny,” she said. “I’m kind of freaking out but Matt is such a gentleman. To have somebody who makes you feel safe even when you’re a little scared is so important.” After their flight, topics turned toward family and Matt noticed Sarah’s reluctance. She notably deflected when asked about her father, mentioning he was great and that she was closer to him as much or more than her mother but stopping short of saying he had ALS. At dinner, Sarah was willing to be vulnerable, revealing in full her feelings about her father’s diagnosis and becoming a caregiver in the process. Appreciating her honesty, Matt gave her a rose. “What’s attractive to me about Sarah is the fact that she’s selfless, loving, caring, compassionate, resilient,” he said. “What more could you ask for in someone you’d be looking to spend the rest of your life with?”

At the cocktail party, Matt reunited with Abigail, whom he still considers sweet after she made such a strong first impression, and also seemed content with where things stood with Rachael, another bright spot from the first night. He also eased Marylynn’s mind with a gift of orchids, her favorite flower, which of course infuriated Victoria. Unsurprisingly, Victoria told Matt that Marylynn “cries to manipulate situations” and is “straight-up toxic.” Matt assumed Marylynn was bullying Victoria. “At this point it’s my word against hers,” Marylynn said. “I’m not the type of person that would spite anyone. [Victoria is] jeopardizing my time with you and that’s not OK to me. I’m telling you the honest truth.”

At the rose ceremony, Sarah suffered an emergency, telling a medic she was blacking out and couldn’t see thus ending the episode on a cliff-hanger. Next week, emotions run high as Sarah’s health improves and Victoria’s villainous presence continues to irk and possibly destroy.