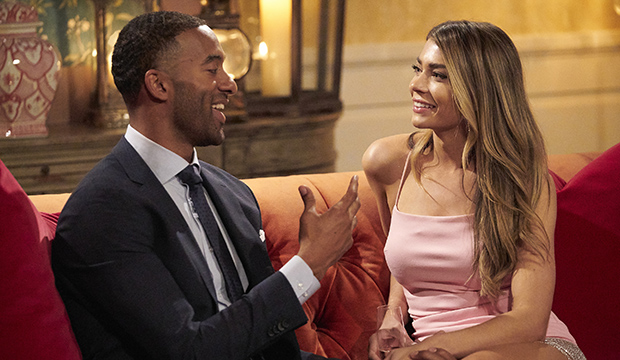 The aftermath of Sarah’s rose ceremony medical emergency kicked off this week’s episode of “The Bachelor.” As Matt James rushed to Sarah’s side, the ladies tried to put the drama in context, especially since there were still six roses to be handed out. In particular, Jessenia questioned if Sarah was actually up to the show’s demands. “You have to mentally prepare,” she said. “Otherwise, why come here?” “Sarah got herself so worked up all night that physically she could not handle it, which is insane,” Anna added. “Now she’s having a really pure and intense moment with Matt [and] she’s getting exactly what she wants.” Realizing Sarah was emotionally and mentally exhausted as well as physically drained, Matt was happy she regained her strength and felt good enough to return.

Sarah, who already received a rose at last week’s one-on-one, was quick to apologize when she rejoined the ladies but her apology didn’t sit well with the queen. “I’ve definitely never fainted for attention and I don’t think I’ve ever even fainted,” Victoria said. “This is ‘The Bachelor.’ It’s not ‘The Sarah Show,’ but Sarah didn’t get that memo.” When Matt returned to complete the rose ceremony, he reminded everyone how tough each ceremony would be from here on out. He eliminated Alana, Kristin, Illeana, and, most startlingly, Victoria’s nemesis Marylynn, fueling speculation Victoria has become more of a producers’ choice rather than someone Matt actually perceives as future wife material.

SEE ‘The Bachelor’ episode 2 recap: Victoria is your evil queen, er, villain of the season

Nervous energy filled the air, but the group created many playfully pleasurable and empowering moments of desire, particularly Anna, Serena and Rachael. But for full-throttle erotica, Kate and Victoria scored the most points. However, Sarah, watching in shock, was visibly bothered and admitted to feeling jealous and hurt. “Watching what happened today was like putting salt on wounds,” she said. “Imagine having your dream date and the next date seeing that shoved down your face. It felt dirty watching that.”

At the after party, Matt shared his views on the love stories. While alone with Katie, Matt was surprised by a visit from Sarah, who felt the urge to tell him her true feelings having been shaken by the group date. He reminded her to remember their one-on-one and not try to compare what she hears from other dates. Knowing she had a target on her back for stealing time with Matt, Sarah was approached outside by Victoria and Katie. Both wanted answers as to why she showed up in the first place. Katie assumed she was having a major bout of insecurity. “If you’re going to take time away from other girls, that’s also going to take time away from Matt,” Katie said. “I encourage you to figure it out hard and quick because it’s going to impact everybody around you and it’s not going to get any easier.” When Matt rejoined the ladies, he gave the rose to Rachael.

Serena P., who has flown under the radar, received the one-on-one, but when Matt arrived to whisk her away, he asked to address the full group. Noticing Sarah’s absence, he went to check on her in her hotel room, which of course further agitated the ladies and made things more awkward for Serena. When he met Sarah, she told him she was packing her bags, which he said would be a “tragedy.” He reiterated how much he enjoyed being with her and how much he cared for her. “Obviously the girls aren’t going to be happy,” he said. “But at the end of the day, it’s me and your connection. I will come here every day. If that’s what it takes.” “This is really hard, but that was really so sweet and comforting,” Sarah said. “This relationship is really real and I mean a lot to him. And after hearing that from him, I can’t leave.”

Matt reassured the ladies he would’ve given them the same courtesy he gave Sarah, but the damage had been done, especially since Sarah insisted on staying isolated in her room instead of facing the ladies. After horseback riding, Matt and Serena P. enjoyed a picnic during which they bonded over similar views on living life on their terms. Over dinner, they both reflected on past relationships while acknowledging the potential of falling in love with each other. As so, Matt gave her a rose.

Before Rachael revealed the members of the second group date, Sarah finally rejoined the ladies. She again apologized to the women on the group date she interrupted, particularly Katie, and also apologized for not facing them sooner. Accusations of manipulation, calculation, insecurity and being toxic flew, especially from Anna, who hasn’t had much time with Matt at all, and Victoria, who was determined not to let Sarah off the hook as the conversation grew heated.

The next morning, Sarah remained ostracized from the group. When Katie came to check on her, Sarah informed her she had decided to leave the show. Katie reassured her that if she has a connection with Matt and he has a connection with her, they need to explore it. “I don’t want to be his backup plan,” she said. “If you leave and he’s still interested in you, he’s going to be wondering ‘What if?” But Sarah insisted she had to leave because her worst insecurities were developing and her father’s illness was also weighing heavily on her heart.

When Katie rejoined the ladies, she revealed Sarah’s decision to leave (which drew quiet applause from Victoria) with the caveat that they all remain classy. She also didn’t want Sarah to think she was “bullied out” of the show. “This ends in an engagement and if you’re not ready for that, you do need to figure that out early,” she said. “If that’s how she feels, it’s best that she leaves.”

Interestingly, when arriving at Matt’s suite, Sarah didn’t immediately say she decided to leave the show. She flipped the script by saying she felt completely attacked by the women, referring to some as “cruel and malicious.” Matt reassured her how much he wanted her to stay. “You shared with me your heart and that meant something to me,” he said. “I don’t want to lose you.” In the end, Sarah told him she just didn’t think she was ready to complete the journey. “This isn’t the best of Sarah, and Matt deserves the best,” she said. “I gave it my all. I just can’t do this.”

Next week, the drama intensifies as five new women join the competition and completely change the dynamics.