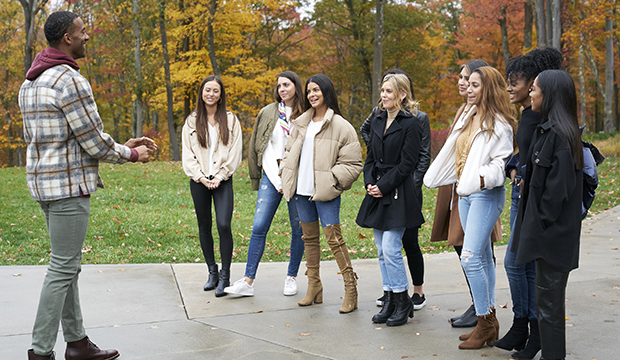 At the beginning of this week’s “The Bachelor,” Matt James was deeply reeling from Sarah’s surprising departure. Now, doubts about the other ladies and the overall process was beginning to take hold. “What if there are going to be more women that don’t want to be a part of my journey?” he said. “It’s a really scary feeling.”

As the ladies gathered to discuss Sarah, MJ wasn’t shedding tears. “Relationships are hard,” she said. “If you’re telling me the first time things get hard, you pack your bags? Peace.” “The trash took itself out,” echoed Victoria, an opinion that didn’t sit well with Katie. “Can you stop? Seriously. She’s gone. There’s no point to keep talking about her or saying negative things.” After calling Victoria “toxic and rude,” Katie said Victoria’s comments were a “reflection of her insecurities.” Later, Victoria and Katie had a second conversation. Victoria wanted an apology for “expressing herself.” “Expressing yourself and name-calling are two different things,” Katie said. “If you want to express yourself with your dildo and think you’re ready for an engagement, you can do that,” Victoria remarked. As suspected, no apologies were given.

Instead of cancelling the group date Sarah was supposed to be a part of, Matt still met with the group, all eagerly awaiting to score much-needed quality time. MJ and Mari both assured him they were there for him. When he spoke with Chelsea, she described how emotional the subject of hair is for Black women. She revealed she had been straightening her hair since age 2 to fit into white culture. “There were times I had so much anxiety and stress about what people were going to think,” she said. “So, when I finally decided to shave it, it was an emotionally freeing experience.” Ultimately, Matt gave Chelsea the rose.

Going into the rose ceremony, Matt’s connections with the ladies seemed to grow stronger and his confidence beamed. However, while chatting with Victoria, Matt was interrupted by Chris Harrison, who reminded him the show received a record response from women who applied because he was chosen as the Bachelor. He said there were more women who were dying to see him and wanted to have a shot at falling in love with him. Better yet: they would arrive immediately. And they did!

First out of the limo was Brittany, 23, a model from Chicago who went in quick to make out with Matt no holds barred. The others ladies were: Michelle, 27, a teacher from Edina, Minn.; Ryan, 26, a dancer/choreographer from Brooklyn, N.Y.; Kim, 28, an ICU nurse from Los Angeles; and Catalina, 29, a former Miss Puerto Rico from Caguas, Puerto Rico.

Inside, unsurprisingly, the ladies were furious, frustrated and felt disrespected. After three weeks, connections had formed. Progress was being made. “I don’t feel good,” Rachael said. “I’m not happy. I’m upset about the entire thing. I’m just very curious to see how it’s going to work with these new women in the house. Maybe he looks at them like a shiny new toy. So, maybe the women that have been here, we might get put to the backburner.” Victoria, seeing Catalina walk into the room wearing a tiara and sash, didn’t waste one moment to call her over and ask if she could actually have her tiara simply because she was “Victoria the Queen.” In a matter of seconds, Victoria snatched the tiara from Catalina’s head and placed it on hers. It was a shocking display that spoke to the fury and desperation in the air. At the rose ceremony, Kaili, Kim, and most startlingly, Khaylah, who had an early spark with Matt as a fellow North Carolinian, were eliminated.

The next group date consisted of Abigail, Anna, Bri, Brittany, Catalina, Magi, Mari, Ryan, and Victoria. But before the date, Matt received a visit from Season 20 Bachelor Ben Higgins. He wanted input on having had his season completely twist overnight. “You gotta continue to be just your realest to them,” Ben said. “You have to give as much of yourself as you possibly can.”

At the date, Ben oversaw the “Fall in Love Fest” obstacle course that included pumpkin-shaped canoes and a squirrel costume. In the end, Mari won. At the after party, Anna had her time interrupted by Brittany but awkwardly froze when Matt asked her what questions she had been longing to ask. Soon after, Anna told Victoria she heard a rumor that Brittany knew many wealthy men in Chicago and may be an escort. At the end of the evening, Matt gave Bri the rose.

SEE ‘The Bachelor’ episode 2 recap: Victoria is your evil queen, er, villain of the season

Michelle received the one-on-one date, which began with a zip line adventure. The chemistry between her and Matt was infectious. They even guessed the same number of kids they’d hope to have (three). “The more time I’m spending with Michelle, I realize we could have fun literally doing anything,” Matt said, as they prepared to soar in a hot air balloon. “Her presence kind of puts me at ease. It feels like I’ve known her for a long time and today is just confirming everything I’ve felt.” Having been vulnerable over dinner discussing her students as well as the death of George Floyd, Michelle received the rose and solidified her position as a sudden frontrunner.

The next day, Brittany was bothered by Anna’s rumor, which she said was false. Katie agreed the “petty mean girl stuff” needed to stop. At the same time, the second group date had begun, a physical challenge overseen by former five-time world boxing champion Mia St. John. Mia told the ladies they would have to fight in front of a live audience. At the “Battle for the Bachelor” main event, an aggressive Katie, Serena C. and Lauren proved tough to beat, so much so that Matt called off the competition when Lauren ferociously punched Serena P. At the after party, Katie encouraged the ladies to get over the tension between the new ladies and be more welcoming. But she soon stepped away to ask Matt if they could chat. She told him about the rumors swirling since the new ladies arrived, including the fact that it had created a “toxic environment.” She encouraged him to address all the ladies and set things straight.

“Who is spreading these rumors and why?” Matt said. “The fact that somebody in the house thinks they’re going to be able to bully their way into my heart? That’s not how it works. It’s not something I want to be a part of this journey and I need to get to the bottom of it.”

Next week, Matt uncovers rumorgate and all hell threatens to break loose.