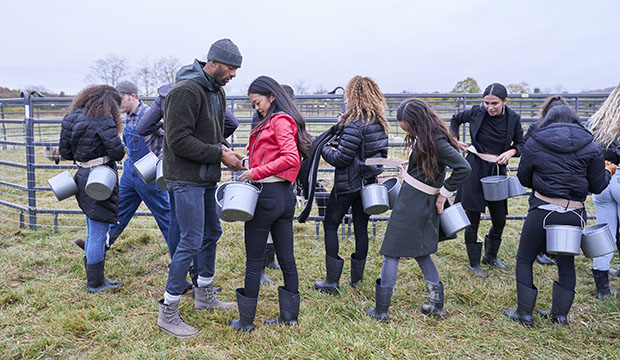 The fierce battle between the New Girls and the OGs reached a breaking point on Monday’s “The Bachelor.”

The episode began with Victoria and Kit taking a stroll around the resort discussing the rivalry. Victoria referred to the new girls as “annoying” and “disgusting. “Do not let them hear you say that,” Kit reminded her. “Coming in as one of the newer girls, we already knew it was not going to be easy,” said Ryan. “But, honestly, it’s been horrible. All you hear is the New Girls versus the OGs. Why does it have to be a versus thing? I deserve a rose just as much as any of the other girls here.” As the rose ceremony approached, Katie was aware that some of the ladies were going to be upset if they found out she told Matt James about Anna spreading rumors about Brittany. Nevertheless, she was confident in her actions. “If you’re going to be a mean girl,” she said, “I’m going to call you out.”

When Matt arrived for the cocktail party, he announced he was told how “toxic” the environment had become around the house, going so far as to say there was a “mob mentality” and a “culture of bullying” brewing within the two factions. “If you’re having to belittle someone else for you to shine, those aren’t the qualities I’m looking for in my wife.” He then pulled Brittany aside, leaving all the other women to begin the guessing game. Luckily, Anna quickly confessed she started the escort rumor about Brittany. But she also wondered who told Matt.

Alone with Matt, a tearful Brittany told him she didn’t sign up for the show to be bullied or harassed. He reiterated how serious those rumors were and encouraged her to tell him anything in the future because he sees a future with her. Next, Matt spoke with Anna, who told him how sad and upset she was with herself for what transpired with Brittany. She took full responsibility. “The worse thing I could say was said and immediately I felt horrible about it,” she said. “This is on me. This is me being a shallow person in the worst moment ever.” “You’re not a horrible person,” Matt said. “I’ve been in your shoes. I’ve said things I wished I could take back and that I’m not proud of. Ultimately, I’ve had to take responsibility for my words and my actions and I’ve grown from it. But I have a responsibility to the women that are here, to Brittany, to myself, to follow my heart. And, unfortunately, I can’t see you being a part of that journey anymore.” And with that, he eliminated Anna. The damage had been done.

When the ladies realized Anna left the competition, the subject of bullying and the ongoing division in the house arose again. Chelsea and Victoria didn’t feel the environment was toxic. Michelle, this season’s latest frontrunner, disagreed. “I’m fairly uncomfortable in the house,” she said. “People have said disrespectful things and also people have laughed at those things. And there are times when it crosses the line and it’s not OK.” “We don’t want this divisiveness,” Catalina echoed. “Even though I put on a brave face, it obviously hurts.” Apologies were shared, but some ladies, including Catalina and Ryan, felt it was too little too late and simply a matter of convenience.

Alone with Matt, Ryan, just as tearful as Brittany, told him that Victoria called her a “ho,” another revelation he found disappointing. Afterward, Ryan informed Katie and Victoria about her conversation with Matt, emphasizing the division in the house. “I’m always playful — I’m never malicious,” Victoria said. “It makes your actions look fake towards me. The fact that you’d go talk to him about me.” Alone with Victoria, Matt told her about his tearful conversations with Anna and Ryan. “People’s words are so powerful,” he reminded her. Victoria said her “ho” comment was “completely taken out of context.” “What context would calling somebody a ho be acceptable to be taken in?” he remarked.

And perhaps for the first time this season, Victoria was absolutely speechless. Not long after Matt got up to leave, her meltdown began. “Literally, there’s no one in here he can marry besides me. I’m literally the best option for him. I’m not being rude — I’m being serious. If he’s going to believe some idiot over me, he’s not my person. If that does happen that’ll suck because that’s not the way I wanted to leave this situation,” she cried. “I’ll be so heartbroken. I’m trying to be positive, but if that happens, I’ll literally die.”

At the rose ceremony, Catalina, Lauren, Mari, and, yes, Victoria, were eliminated. But Victoria wouldn’t have been Victoria without delivering a final parting shot in all her furious glory: “I honestly feel so sorry for you that you would listen to hearsay and not all of the facts behind a situation,” she said, approaching Matt intensely with arms folded. “So, goodbye.” In the confessional, she offered more perspective. “You think I’m going to go hug him goodbye? No. And he just stared at me. How dare you. He is not my king and I am still a queen. Matt is a jester. The fact that he chose Katie over me? Matt, I feel sorry for you with your choices.”

The next day, the ladies were hoping for a restart despite the wild events surrounding the cocktail party and rose ceremony. Chris Harrison informed the ladies that the competition was past the halfway point. Rachael received the first one-on-one of the week, a fairy tale-inspired date. First, she selected a gorgeous array of fashions overseen by celebrity designer Ty Hunter with Matt beaming by her side in approval. Afterward, in a startlingly awkward move, Rachael returned to the house, giddy with delight with her bags of designer goodies as the other ladies looked on with a mixture of awe and disgust. That evening, Matt and Rachael, both impeccably dressed in royal blue, discussed insecurities and evolving feelings of love. Rachael told Matt she he was falling in love with him and vice versa. He gave her the rose, and in perfect storybook fashion, they rode off together in a horse-drawn carriage.

The group date consisted of Abigail, Bri, Brittany, Chelsea, Jessenia, Katie, MJ, Magi, Michelle, Pieper, Ryan, Serena C., and Serena P. It was a farm challenge, reminding the ladies that relationships, like working a farm, takes patience and hard work. MJ attempted to step into the spotlight, volunteering to do goat and chicken chores, but the ladies questioned her authenticity. While Pieper was being interviewed, Matt stepped in and totally made out with her, a juicy moment caught by MJ. And, of course, MJ quickly told the ladies what she saw, which caught everyone by surprise. But who knew Matt had such strong feelings for Pieper?

That evening, Abigail told Matt she feared disappointing him, and if they had a family, she wanted him to know their children have a likelihood of being deaf. He reassured her of the similarities they share and her place in the competition. Michelle told Matt the group date was emotionally tough on her heart, but Matt understood and reassured her. Alone with MJ, Matt told her he heard she was an “antagonist,” which didn’t sit well with her. When MJ rejoined the ladies, she told them what Matt said. She felt her character was questioned. Jessenia admitted she was the source. At the end of the night, Matt gave the rose to Abigail.

Kit’s one-on-one date was a casual dinner at Matt’s bungalow, a lighthearted outing of baking cookies and growing closer. She told him the show has allowed her to be vulnerable, allowing her walls to come down for the first time. “I’m surprised every day how open I’ve been with you,” she said, “and the fact that I am starting to fall in love with you.” Matt, having said how “fortunate, happy and blessed” he was to have Kit on the show, gave her the rose.

Before the next rose ceremony, Matt instructed Jessenia and MJ to meet him before the cocktail party in order to find out the truth. MJ felt Jessenia put her relationship with Matt in jeopardy. Jessenia, calling MJ a liar, said she’s seen three sides to her: “Who you are at the house, who you are with Matt, and who you are when the cameras are on. So, I wonder which side Matt’s going to see tonight?”

Next week, the drama swells as MJ and Jessenia face elimination and Season 23 contestant Heather Martin returns to stir the pot.