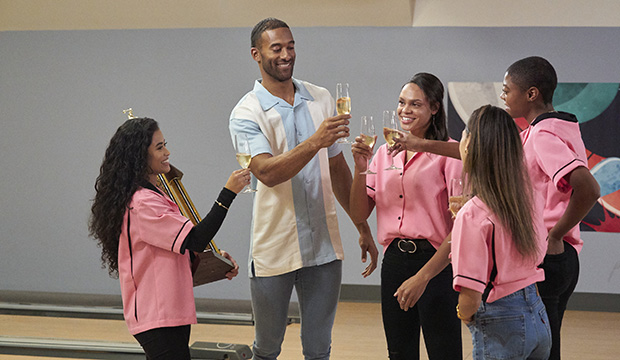 Resolving last week’s cliffhanger, this week’s episode of “The Bachelor” opened with the fiery squabble between Jessenia and MJ, trading jabs and mutual disgust while waiting for Matt prior to the rose ceremony. When he arrived, it was time to get to the bottom of the tension. “MJ loves to preach about leading by example but she’s the one who created that division — she started it,” Jessenia said. “Everything she’s done has come from a place of malice.” “I’m trying to bring everyone together,” MJ remarked. “I’m mentally and emotionally exhausted. And then to have my character put into question hurt me the most.” After taking a moment to decide, Matt opted to send MJ home.

Soon after Jessenia rejoined the ladies, Chris Harrison announced that Matt chose not to have a cocktail party and would move forward to the rose ceremony, obviously disappointing everyone. A particularly perturbed Serena C. blamed Katie for instigating unnecessary mischief. “I feel like all of this could have been avoided if the whole talk of bullying and toxicity wouldn’t have been brought up in the first place at the last rose ceremony,” she said. “Pretty much every scenario where there has been drama you have been a part of.” At the rose ceremony, Brittany, Magi and Ryan were eliminated.

The next morning, Pieper, whose profile was raised significantly last week, received the first one-on-one. But before the date, Serena C. chatted with Katie, basically blaming her for feeling frustrated about not having had as much time with Matt as others. “I don’t think you are truly here for Matt,” Serena said. “The fact that you’re sitting here still trying to attack me is pathetic,” Katie remarked. “You keep taking up so much of my energy and it’s a waste.”

Serena then proceeded to give Katie a nickname, which brought back memories of a recently acclaimed miniseries: “Your little antics of all the drama that you’ve been in and been inserting yourself into every conversation and other’s people’s business that’s not even your own, you’re lighting all these little fires everywhere. You are the freaking arsonist.” “I’m not going to sit here and let mean girls be mean girls in this house,” snapped Katie. “I let the girls speak for themselves.”

Next, as if the drama couldn’t get more haywire, Season 23 “Bachelor” contestant Heather Martin arrived out of nowhere at the front gate. She happily told Chris how former Bachelorette Hannah Brown raved about Matt being a perfect match for her. Chris reminded her the show was in quarantine and the process had developed very far. He told her to go back to her motel and he’d be in touch.

Matt and Pieper’s romantic nighttime date began with a pitch-black walk in the woods ultimately revealing a fun carnival. Afterward, Pieper opened up about her family’s struggle with communicating love. Above all, she asked Matt for patience and said she was falling in love with him. “I don’t want to be afraid of how I feel anymore,” she said. “I don’t want to be afraid of expressing feelings anymore because I wouldn’t want to bring that into our relationship.” Matt appreciated her vulnerability and gave her the rose. They ended their date serenaded by country artist Temecula Road.

The group date consisted of Abigail, Bri, Chelsea, Jessenia, Kit, Michelle, Rachael, Serena C. and Serena P. participating in a bowling challenge. The Pink Petals (Chelsea, Jessenia, Michelle, and Serena P.) won the bonus of having a cocktail party with Matt. But in a surprising move, Matt extended the party to the losing team as well. At the end of the evening, he gave the rose to Michelle, reassuring her status among the frontrunners.

Before his one-on-one with Katie, Matt received a visit from Season 15 “Bachelorette” runner-up Tyler Cameron, his roommate and longtime friend. He told Tyler he liked Katie mainly because she was “unapologetically herself.” Reminding him that his relationship with Hannah Brown was more of a slow burn, Tyler encouraged Matt to not be closed off. “Stay open and stay into conversations,” he said. “I’d rather you give it your all and put everything out there and then walk away from this not having any regrets.”

Meeting Katie at the resort’s spa, Matt told her their date would begin by playfully sabotaging Tyler’s scheduled massage. Tyler ultimately took the prank in stride and was a good sport. That evening, Matt admitted other relationships had developed further than theirs and he sent her home.

After a few days in quarantine, Heather officially made her presence known within the competition, surprising Matt and the ladies at the cocktail party. “I feel like I’m in a dream right now,” Matt said. Don’t we all? Next week, we’ll find out whether Heather stays or goes!