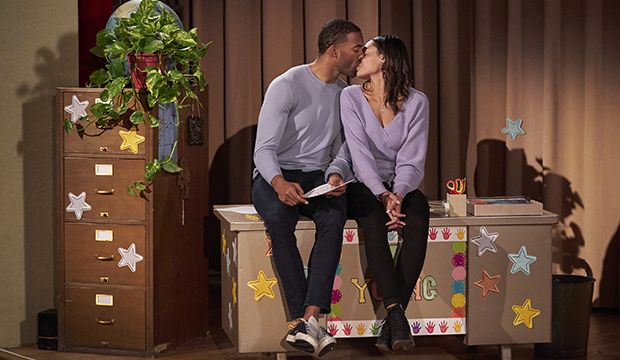 Hometown week on “The Bachelor” brought an added layer of excitement, sentiment and drama as Matt James was introduced to the families of Rachael, Bri, Michelle and Serena P.

First up was Michelle, a former athlete memorably added midway into the competition. She and Matt began their date with a charming bike ride followed by a cute virtual reunion with students from her Minnesota classroom. An inquisitive student named Tyler particularly pulled no punches: “Are you going to marry her?” The question put an instant smile on Michelle’s face. Even so, Matt offered a very fair response. “We’re in the process of figuring that out,” he said. “I can’t give you a definitive answer yet, but I will Zoom call you when I know.” Matt loved how much Michelle had impacted her students’ lives and how much she meant to them.

That evening, Matt met Michelle’s parents. Her father, Ephraim, felt Matt was a nice guy but was concerned there were still other women in the picture. He was particularly surprised to hear Michelle say she was willing to say yes if in fact Matt proposed. Alone with Ephraim, Matt revealed what he enjoys most about Michelle. “She has strong convictions … things that are important to her, the things she wants to accomplish in life, they are aligned with a lot of my life experiences and what I want to accomplish.” Matt also noted he hadn’t said he was in love with Michelle but is falling for her nonetheless. After saying goodbye to her parents, Michelle told Matt she was falling in love with him. “This is a new feeling to me,” she said. “I don’t think it’s a feeling that’s going to be going away.”

SEE ‘The Bachelor’ episode 7 recap: Matt quickly whittles down to his final 4

Rachael’s hometown date began with her blindfolding Matt and whisking him away for a skydiving adventure 12,000 feet in the air, going 120 miles per hour in the process. Everything seemed great as they descended (“Matt, I told you that I’ve been falling for you and now I’m literally falling for you”) but shockingly turned seemingly for the worst when Rachael took a hard crash, landing on her back. Matt, totally startled, was relieved she felt OK. “The idea of her being injured or banged up — it puts everything into perspective. … You don’t realize how much you care until there is a chance you could be gone. … It’s a different feeling when you’re falling in love and that person is potentially really hurt.”

“This was a really bad situation turned good because he was there for me,” Rachael said. “And that’s what I want out of a partner. And I think that’s what a marriage is all about. I can’t even think about going through life without Matt at this point.”

That evening, Matt met Rachael’s dad, mom and sister. Alone with her mom, Rachael told her she fell in love with Matt easily and he was someone she really sees a future with. Better yet: she saw no red flags. “I feel really confident where we’re at,” she said. Alone with Matt, Rachael’s dad questioned the timing of the entire situation but Matt tried to put his doubts aside. “The end goal for me is to be married,” he said. “[My relationship with Rachael] has been built on honesty, communication and being up-front with one another. And I’ve told her that I’m falling in love with her. I’ve never connected with someone on a level that we’ve connected on.” Rachael was ultimately disappointed Matt didn’t ask her dad for his blessing, but Matt told her that was not his intention while meeting four families.

Up next, Bri, who notably received the first one-on-one of the season, picked up Matt in a Jeep for some off-road fun in the mud, which led to an intimate picnic. The shared vulnerabilities between them having grown up with similar backgrounds remained a strong aspect of their chemistry. That evening, sharing quality time with Bri’s mother Lauren, Matt opened up about his strong his connection with Bri, saying he was falling in love with her. “[Bri] is a realist,” Lauren said. “She wants to get her hopes up, but she’s afraid of being shut down. Do you see Bri in your life?” “Absolutely,” he said.

“These feelings for Matt are terrifying,” Bri later told Lauren. “But I need to be honest and I need to be vulnerable and I know that’s really hard for me to do, and it makes me want to put up a wall.” At the end of the date, Bri told Matt she was falling in love with him and hoped for more time with him, hoping to ease any doubts he may have about where she truly stood.

Lastly, Serena P., a proud Canadian, playfully educated Matt on all things Canada from geography to a plate of poutine and a game of hockey. That evening, Serena’s mom Rasna had doubts, mostly due to the timing. Serena’ sister Talia was also unsure, citing the fact she didn’t think Serena was “smitten.” “Based on what I saw, Serena is definitely holding back,” she said. “I don’t think they’re quite there yet. The thing I’m most nervous about is she could be talking herself into it.” After chatting with her family, Serena admitted she has more doubts, ranging from fear to simply the idea of getting hurt again.

Meeting Chris Harrison, Matt assessed the magnitude of the hometown dates. “I’ve never felt this way,” he said. “Having it reciprocated with women that you’re pursuing and you can see life with is continued validation on me being where I need to be right now.” He also seemed to be more conflicted about Serena. In order to sort things out, he chose to meet Serena that evening for clarity.

“I’ve known how I’ve felt about you for a long time,” Matt said. “I can say without a doubt you are the person I’ve spent the most time with and that’s intentional. It’s because of what I see in a relationship with you.” However, Serena admitted her doubts, voicing her struggle to talk about her feelings for him with her family. “I thought it was fear initially — that I was just scared,” she said. “But I think, if I’m being honest with myself, it’s more than that. I think it comes down to the fact I don’t think you’re my person.” Stunned, Matt admitted he felt something was off between them after meeting her family. “It sucks to hear that because I just want what’s best for you. It stinks,” he said. “I’m just not there and I don’t know why,” she said. “Trust me when I say I thought about it so much and I’ve been emotionally torn up over it.”

At the rose ceremony, Michelle, Bri and Rachael were curious as to Serena’s whereabouts. Matt informed them Serena left the show and also offered a word of warning. “Tonight, I just want to reiterate what it means when I offer you a rose. And what comes with accepting that rose is accepting what comes with being here. For me, that’s an engagement. I want you to think long and hard about that commitment before you accept the rose tonight knowing that’s where we’re headed going forward.” After everyone accepted their roses, the stakes have been raised even higher. But first, next week, the women will tell all, including “Queen” Victoria!