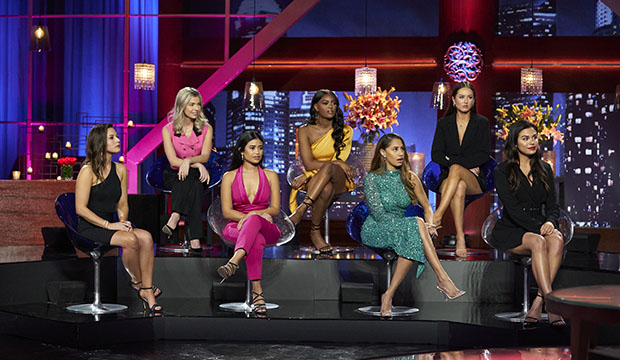 The colorful ladies of Season 25 of  “The Bachelor” gathered to have their highly anticipated say regarding Matt James in the always juicy “Women Tell All” episode.

After reflecting on another wild, unprecedented season, Chris Harrison asked the ladies their general thoughts on how things played out. Khaylah, who bonded with Matt right out of the gate due to their mutual North Carolina roots, called the experience “exhilarating.” Abigail, who received the first impression rose and was a perceived early favorite, praised Matt as “super easy to talk to” and said he “blew expectations out of the water.”

Chris then chose MJ and Jessenia to reflect in full. He was curious whether or not Jessenia still believed MJ contributed to the toxicity in the house and was a mean girl. “I would say it was kind of adding onto making them feel uncomfortable more so,” Jessenia said. “But it’s the fact she wouldn’t necessarily own up to it to Matt. And moving into the two-on-one, she doubled-down.” “I owned it the first time I got to talk to him at the two-on-one,” MJ replied. “I said I acknowledged it and I apologized.” Mari quickly came to MJ’s defense, telling Jessenia she didn’t agree with her belief that MJ was fake. But in the end, MJ had the last word. “I’m not here to tear anybody down,” she said. “I think we’re all here to lift each other up. But I do have a strong personality and it should not be misconstrued as mean.”

Next, the conversation turned toward the five ladies who entered the competition midway. Chris asked Ryan, specifically targeted by Victoria, to share her thoughts on the volatile contentiousness within the house. “It was uncomfortable, awkward and a lot of disrespect — initially,” Ryan said. “It was a rough start.” Chris then asked Mari her thoughts on living with Victoria. “There are a lot of different sides to Victoria,” Mari said. “And some of those sides — she’s a girl’s girl, she’s funny, she makes jokes — but when it’s at the expense of others, how far is too far?” “It’s hard to hear yourself being called a ho on national television,” Ryan added. “It was hurtful.”

Victoria asked Ryan if she was merely being “super sensitive” considering she’s received death threats and has also been the subject of numerous memes. “I think anybody can be emotional in a situation when they’re called a ho, an idiot or a shady bitch,” Ryan said. “I have been called way more horrible things on the internet and I brush it off,” Victoria replied. “The internet isn’t on national TV,” Ryan said. “I was called a bully on TV,” Victoria remarked. “OK, but maybe you were,” Ryan said.

When asked about rewatching Victoria’s behavior, Katie admitted it was hard. “I know people tolerated it and that’s just something I couldn’t do,” she said. “The name-calling is completely unacceptable,” Victoria interjected. “But we’re all getting backlash for however we handled anything and I think it’s important to remember we all did the best we could do. Life is a learning experience as is this journey and we’re just getting to watch it back. So, again, I’m just so sorry.”

Katie and Victoria made up, but Katie was soon questioned by Chelsea, who accused her of being the source of toxicity when she told Matt about behaviors in the house. “[You caused] the domino effect that led to every single drama in the house you weren’t involved in,” Chelsea said. “We had to live in this house for up to two months and what I was experiencing personally sucked,” Katie replied. “So, for me, I felt like I owed it to Matt, and to myself, and to the environment, to let him know my opinions.”

Next, Chris invited Brittany to sit in the hot seat. The victim of a rumor stating she was a high-end escort in Chicago, Brittany said looking back on the experience was disappointing. “You see me come in as this strong, confident, smiley girl, and in the first 24 hours I was just completely tore down,” she said. “I never felt so low like that in my entire life. I was just completely shocked — that was defeating. … I didn’t sign up to get bullied, I didn’t sign up to get my name slandered. I came here to find my person. And this is forever going to have to be an association to my name which is kind of unfair. I have to constantly defend my name from now on.”

Brittany also revealed that Anna, who started the rumor, hadn’t reached out to her since taping. “Nothing I can say can justify what I did,” Anna said. “Honestly, there is no reason ever to take down another woman without ever thinking of the consequences. … I am a hundred times more sorry. I can’t imagine what it’s like to be you. And it just sucks that I did that to someone else.” Anna ultimately blamed her insecurities for spreading the rumor.

SEE ‘The Bachelor’ episode 7 recap: Matt quickly whittles down to his final 4

After showcasing some playful never-before-seen footage, Chris invited Katie to the hot seat and she became emotional about dating Matt. “I genuinely was so confident and I really thought he was going to meet my family,” she said. “I wasn’t paying attention to the other relationships in the house. And I know my personality is a lot to handle and for him to be accepting of it –that’s what you want. … I was so shocked he sent me home. I just didn’t see it coming.”

Abigail, who has received a lot of positive feedback from her time on the show representing the deaf community, was spotlighted next. She agreed with Chris that her initial chemistry with Matt was apparent. “He gave me so much assurance every time I was with him,” she said. “I was on my way to falling in love. He had all the qualities I was looking for.” She also said she wonders what might have been if she had more time with Matt. “I have a big ‘what if?’” she said. “If we had that much attraction with how little time we had, what if we had a whole day together? Could I have been up there with the frontrunners?”

During her interview with Chris, Pieper said she felt just as shocked now as she did during taping. Things didn’t go her way, but she still felt proud of herself for giving love a chance. “Matt has an amazing ability to make everybody feel really special and I think all the women here can relate to that,” she said. “I was absolutely heartbroken, soul crushed, but I’m definitely glad I did it. I feel like I’ve grown as a person. I know what I want. I will never settle again.”

Lastly, Serena P. opened up about her self-elimination, which threw a wrench into Matt’s game plan during hometown dates. She said speaking with her mom brought clarity, but it didn’t leave her truly knowing Matt was 100 percent her guy. Chris said he felt she and Matt were conflicted. “I care about him still so much,” she said. “The last thing I ever wanted to do was hurt him. Losing him was one thing but knowing I could be hurting him in the process was just the cherry on top of it all in regards to me feeling hurt and guilty. As much it was really hard though I would have been doing him a disservice by staying. As much as I deserve to be 100 percent on someone, he deserves to be with someone who’s 100 percent on him. And I couldn’t give him that. And he had three other amazing women there whom he deserved to explore those relationships with because I was confident that they could give him that. I hope that he’s doing well. I truly only wish the best for him. I know that breakup was hard on both of us, but I just hope he’s happy.”

Matt’s arrival on the hot seat, complete with a James Harden-esque beard, was met with excitement. He admitted to Chris that the level of drama between the ladies was surprising when he rewatched the show. “There’s a million different factors you have to take into account so I try not to hold them to an unrealistic standard,” he said. “It’s difficult when new information is brought to you, you can only act on what you know. You’ve got to take action in some cases and you’ve got to not beat yourself up for not seeing something.”

When Matt singled out Victoria, saying he knew her heart in spite of her behavior, she notably blamed her dramatic exit on fear of rejection. “I was going through levels of pain at the time,” she said. “I feel like I dropped the ball on our relationship because there’s a lot more there I felt like I could have done for you that I didn’t get the chance to,” he replied. On a lighter note, Matt didn’t realize throughout the season how odd it was that he enjoyed kissing with his eyes open. Keep ‘em closed next time, Matt!

Next week, Matt’s journey escalates as he and his final three — Bri, Michelle and Rachael — gear up for the intimate fantasy suites. But if the previews are any indication, expects tears to flow as Matt ponders whether or not he will continue with the competition. Buckle up!