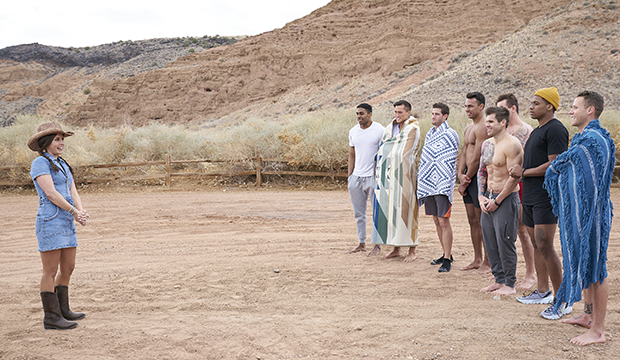 Katie Thurston’s romantic quest kicked into gear this week on “The Bachelorette” as she ventured on her first round of dates with 23 men aimed to impress.

Focusing on the task ahead, Katie acknowledged it was time to begin to “trust her journey.” “This week, I’m hoping to figure out who’s here for the right reasons,” she told co-hosts Tayshia Adams and Kaitlyn Bristowe. “I think some people don’t take this seriously, and I’m here to find my future husband.”

This week, there were two group dates and a single one-on-one. The first group date consisted of Christian, Garrett, Tre, Quartney, Mike P., James, Justin, Thomas, Connor B. and Karl. Podcast host/comedienne Heather McDonald guided the guys through a sex-positive quiz in search of finding “The Greatest Lover of All Time.” Mike, who hadn’t revealed his virginity to Katie, became so uncomfortable he was reduced to tears. A total meltdown seemed imminent.

When the time came to explain why they deserved the title, standouts included: Connor (memorably arriving last week in a cat costume) providing a funny original song proclaiming, “My feet may not be perfect but I know my own self-worth/And the length of my affection is less important than the girth”; Tre’s risqué puppet show; and, surprisingly, Mike’s heartfelt reflections about his virginity and what he hopes for in his future wife. And, of course, his honesty propelled him to victory. “Mike acknowledged that he knows exactly who I am,” Katie said. “For him to choose to be here for me, knowing who I am, how I am, that’s probably what hit me the most.” “Intimacy comes in so many different forms,” Mike reminded.

At the after-party, Connor was intent to redo his first kiss with Katie because he believed his cat getup complete with whiskers and furry paws got in the way. The second time around was definitely a success. “I don’t miss the paws,” Katie said. “That was great!” But in the end, Thomas, who is still somewhat of a mystery in the grand scheme of things, received the group date rose, based on an indescribable connection both he and Katie felt was brewing.

Quiet, unassuming Greg, who received the first impression rose last week, was given the first one-on-one. The date’s outdoor theme was a tribute to Katie’s dad, who often took her camping and fishing as a child. After admitting he had been camping before, Greg had no idea how to pitch a tent but took everything in stride, including constructing a toilet out of a plastic bucket. Most importantly, he scored high marks from Katie. “Greg is just so easy to be around,” she said. “I feel like we’re dating. I feel like I know him. We did make out while he was sitting on the toilet. It was hot.”

At dinner, Katie wasn’t afraid to be vulnerable discussing her father’s death. She acknowledged the difficulty of trying to balance the present with the past. But Greg understood due to the fact that he lost his own father to cancer two years ago. Their shared grief is obviously a catalyst creating a deeper bond moving forward. Katie was more than pleased to give Greg the date rose as fireworks dazzled above.

The next morning, the guys were surprisingly awakened by Tayshia and Kaitlyn in cowgirl attire with pots and pans in tow for a “down and dirty” experience. This second group date consisted of John, Andrew S., Kyle, Josh, Aaron, Brendan, Hunter and Cody, all vying to be “Katie’s Golden Cowboy” in “Katie’s Big Buckle Brawl.” The high-energy, full-throttle mud wrestling competition particularly brought out the tension between Aaron and Cody, who previously knew each other in San Diego. After being declared winner of the brawl, Aaron told Katie he felt Cody wasn’t on the show for the right reasons. The news didn’t sit well. Katie said she didn’t want anything to do with “hidden agendas.”

SEE Chris Harrison has exited the ‘Bachelor’ franchise for good

At the after-party, Katie was quick to bring Cody up to speed on Aaron’s thoughts, particularly that he called him “malicious,” “unkind” and “here for fame.” Cody denied such behavior. Soon after, Cody blamed Aaron for speaking up in the first place. “How would anyone know we knew each other if you kept your mouth shut?” Based on a serious lack of trust, Katie asked Cody to go home.

When she returned to the party, Katie was able to have more quality time with the guys. She particularly discovered a bond with Andrew over their similarly tough upbringing, so much so she rewarded him with the date rose.

The next evening before the rose ceremony, the thought of some men not being on the show for the right reasons, especially Karl, brought Katie to the breaking point. Facing everyone, she made her point of view crystal clear. “Tonight, a bomb was dropped on me about multiple people still here for the wrong f—— reason. And I don’t know how clear I can be about my intentions and my time, but if you are not here for me, if you are not here for an engagement, then get the f— out.”

While Katie was alone with Aaron, whom she trusts, Karl admitted to everyone he was the source who told Katie his perspectives on certain guys he didn’t feel were “authentic.” The fallout from this will undoubtedly be huge.

Tune in next week as Karl, the season’s first official villain, doubles down and fury around the house is unleashed.