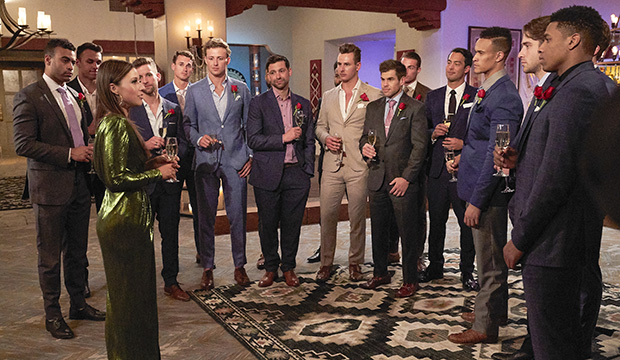 Katie Thurston was all about the truth this week in one of the most revealing and vulnerable episodes in “Bachelorette” history.

The episode began with the fallout from last week’s cocktail party cliffhanger. Karl unexpectedly went rogue, accusing multiple guys of not being on the show for the right reasons. Of course, his villainy enraged everyone in sight. After Katie finished sobbing in an adjacent room, she returned to inform the guys she didn’t have the “right mindset” to give some of them the energy and time they deserved. She felt it best to go straight to the rose ceremony. “I don’t need this insecurity being planted into my heart,” Katie told Greg, this season’s frontrunner who rushed to her side to make sure she was OK.

At the rose ceremony, Katie tried to put things into perspective. “I’m here to find my husband,” she said. “I’m here to fall in love and that is what I am hoping all of you are here for. I appreciate all the honesty I have been given, but I’m still very confused. But I’m going to follow my heart.” After three roses were handed out, Mike P. received his and surprisingly spoke to Katie on behalf of the group. “We feel as a unit, it’s our job to protect your heart,” he said. “And we’ve come together in solidarity that we think that unfortunately what Karl said wasn’t the truth. And as a unit, we really feel that’s what you needed to hear.” Katie was thankful but sought to verify nonetheless. “Do you all feel the same way?” Everyone nodded in agreement. She then left the room.

SEE ‘The Bachelorette’ episode 2 recap: Katie sends one man home after drama for all the wrong reasons

Seeking advice from Tayshia and Kaitlyn, Katie admitted she originally planned to keep Karl. “The great thing about this is that it’s your decision,” Kaitlyn said. “It’s not really up to them at this point — it’s your decision now. And we’re here to back you up on that.” After Katie returned to resume the ceremony, John, Kyle, Garrett and, yes, Karl, were sent home. Karl didn’t receive any farewells from his fellow housemates or Katie for that matter.

The next day, the first group date of the week consisted of Aaron, Quartney, James, Connor B., David, Justin, Thomas, Hunter and Brendan. Former Bachelor Nick Viall joined Katie to oversee an intervention-style session centered on honesty, including discussion of past relationships. Most movingly, Hunter admitted he was a divorced father of two and Connor shared his battle with alcohol. Most significantly, Thomas veered off into awkward territory that exposed his shortcomings. “I couldn’t sit here and look you in the face and say, ‘Yeah, when I showed up to this place I was here for the right reasons’ because I didn’t know who you were. Worst case scenario, I’d give it a shot. And, yeah, you can build a great platform from it. And that’s just the honest-to-God truth, my approach to this.” He even said he went on a date a week before he joined the show. “The speech he gave was like a sales pitch,” Aaron commented. “Who the f— is this guy?”

But it wasn’t just the men who revealed their truths. Katie, in tears, disclosed she was a victim of sexual assault 10 years ago. “That is something I don’t wish upon anybody,” she said. “I was in denial about what happened. So much so that I tried to form a relationship with him because I didn’t want to believe what actually had happened. And when that didn’t work out, for years I had a very unhealthy relationship with sex. I didn’t want to have sex. I didn’t like talking about sex. And it’s taken me a long time to get to where I am now and being open and comfortable talking about it and loving myself and accepting things I can no longer control. I just want you guys to know I’ve come a long way and who I was 10 years ago and how important consent is, how important communication is, and how important it is to not guilt-trip somebody for not having enough sex with them, guilt-trip them for not having sex with them in general. So, that is something really big that’s happened in my life that in some ways has really shaped me to who exactly I am today. So, with you guys sharing your stories, I thought it was important to share mine as well.”

Back at the house, Michael spoke of his 16-year marriage and losing his wife to breast cancer. He’s been waiting for the right time to share his story with Katie. “I’m doing this primarily to take some risks and start to look at a future for myself and my son that maybe I wouldn’t have done at home,” he said.

That evening at the after-party, Katie reminded Thomas that he was going to discuss any potential red flags but felt he was dodging the question. Making matters worse, she still didn’t get any answers. “[Katie] was asking for questions and I wish I had more of a response for her,” Thomas said before going back to  her  to clean things up. “My nerves rattled and I let that moment get the best of me. It doesn’t feel good. It sucks.” She admired how “passionate” he was about his feelings but oddly didn’t press him for specifics. In the end, Connor received the date rose.

The next day, Michael, 36, had his one-on-one date. After a fun ride with Katie behind the wheel of a dune buggy, he opened up about being a dad and simply being grateful for the moment. “At my age, I’m experiencing life all over again, like brand new, that really excites me,” he said. “I always hear that this ends in an engagement, but it begins an engagement.” Over dinner, he shared his emotional story, which really touched Katie’s heart and she gave him a rose. “The way he spoke about love — it was beautiful,” she said. “I’m overwhelmed with sadness for his pain but happiness for what our love can be. He said it so beautifully. What a blessing to fall in love twice. And he talked about it in a way that the love him and I can create could be so unique and I believe that.”

The episode ended as the second group date was set to begin. Thomas’ motives were called into question in a house meeting. In fact, Hunter regarded Thomas’ behavior as “fraudulent, almost like a campaign” as if he were trying to be the next “Bachelor.” After being pressed again by Hunter, Thomas admitted that one of his thoughts indeed was potentially being the next “Bachelor.” In other words, he’s the new villain.

Can Thomas be believed? How will Katie react to Thomas’ “Bachelor” hopes? And what happens when Blake Moynes enters the house? The drama intensifies next week!