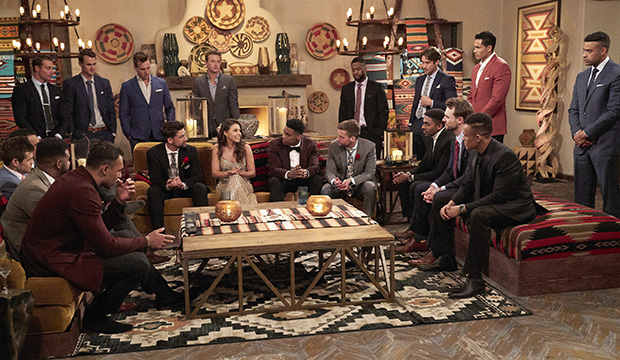 Katie Thurston pulled out the stops this week on “The Bachelorette,” delivering a bold rebuke of an early favorite whose charm and good looks couldn’t masquerade his manipulations.

The episode opened with the aftermath of Thomas admitting to everyone he had thoughts of becoming the next “Bachelor.” “Thomas wants to be the Bachelor, he wants to be famous,” Hunter said. “And Katie is his ticket. That’s what really, really pisses me off. She’s gonna find out and if it doesn’t ruin today’s date, it will ruin the rose ceremony.” Quartney also felt suspicious of Thomas’ instincts. “Thomas is manipulating,” he said. “And I feel he may be manipulating Katie. I had a lot of respect for Thomas at the beginning of this. I thought he was a good dude. But, really, he’s just a good talker.”

The group date centered on Katie finding someone who is daring and has a great sense of humor.  The event was ultimately drama-free and a good time for all. That evening, Andrew S., Andrew M., Josh and Greg made significant conversational strides to ensure their connections with Katie. Even so, Katie only revealed she was falling for Greg, a huge sign that he’s still a formidable frontrunner.

Breaking from the pack in an attempt to be vulnerable and truthful, Tre told Katie his concerns about Thomas, particularly his duality. “In one-on-one settings, he can be very manipulative, very good with his words, into a point [in which] he’s luring you back into [thinking] ‘Thomas is a good guy.’ This morning, he basically had to be asked several times, ‘Hey, man, when you came out there, was your intention to be the Bachelor? And it wasn’t until the fourth time that Hunter asked him this question that he said, ‘Yes, I wanted to be the Bachelor.”

SEE ‘The Bachelor’ episode 3 recap: Katie wants the truth from her guys and bravely shares her own

Hearing this revelation, Katie was taken aback and disappointed. “I feel devastated, honestly, completely blindsided,” she said. “A lot of people come here open-minded to falling in love. But to come here wanting to be the Bachelor means you were never open to falling in love.” For his willingness to be honest, Tre received the date rose, which didn’t sit well with Andrew S. “I can’t get past the fact that he literally told her,” Andrew said. “That decision is going to affect everyone. There’s going to be a big ripple effect and that’s what I’m afraid of.”

The next day, Tayshia informed Katie someone reached out to her as a new potential match. “He’s genuine,” Tayshia said. “And I feel like you are looking for someone that will really challenge but also bring out the best of you and really accept you for you.” “I’m speechless,” Katie said. “It’s been an interesting 24 hours. … The scary part for me is I do have relationships truly forming and the last thing I want to do is disrupt that. So, whoever this guy is, he has to be worth that risk.”

When the mystery man was revealed to be Blake Moynes, a familiar face from Tayshia and Clare Crawley’s season of “The Bachelorette,” Blake didn’t waste a second stating why Katie intrigued him. “Your openness — you’re bold, you’re confident — but you have this playfulness to you and a humor I can really relate to.” Katie, flustered yet flattered, admitted Blake had previously reached out to her, notably sending DMs commending her for her “bold personality.” She warned him that the fact he already dated two Bachelorettes was problematic, particularly because the guys are seriously questioning who is on the show for the right reasons. “I promise you that if it came down to the end and we connected the way I think that we might, we would be engaged at the end of this,” Blake said. “I didn’t come here to disappoint and I won’t do that to you. That’s not me.” Katie felt Blake was sincere but disrupting the house was top of mind, especially her situation with Thomas. She needed time to really think this through.

Katie sought advice from Tayshia and Kaitlyn. After bringing them up to speed about Thomas’ desire to be the next Bachelor, she admitted she thought Thomas was going to go far in the competition, including the crucial hometown date. “The way he made me feel was so good,” she said. “I really don’t think he can say anything to change my mind.” Alone with Tre, Thomas remained puzzled why he’s been caught in controversy. “Everything that’s being blown out is rational thinking to me,” he said. “It’s my truth that I’ve confessed. I feel like I’m doing everything I can to have resolution with this and they’re just beating a dead horse.”

SEE ‘The Bachelorette’ episode 2 recap: Katie sends one man home after drama for all the wrong reasons

Before the rose ceremony, Thomas spoke with Katie, reiterating he did indeed consider the possibility of becoming the next Bachelor. Nonetheless, he said he’s on the show to see if what they have is real. “I’ve struggled so much when it comes to you because I felt something with you,” Katie said. “And then to have multiple people come forward and question your integrity is a lot to consider.” She didn’t give Thomas an answer, telling him instead she’d see him at the ceremony. At the same rate, Katie was perturbed by how many guys chose to spend time talking about Thomas rather than chatting with her about the growth of their personal relationships.

At the outset of the rose ceremony, Thomas surprisingly spoke up, apologizing to Katie for any moment she felt he wasn’t on the show for the right reasons. He also apologized to the guys for any disrespect they might have felt, including diminishing their value. At the moment she presented the final rose, Katie called for Thomas, which instantly left the guys shocked and confused. But when Thomas approached, Katie defiantly stepped back, launching into one of the best moments in franchise history. “You told me things I wanted to hear,” she said. “What I learned about you tonight is you’re selfish, unkind and a liar. Your ‘Bachelor’ audition ends tonight — so get out.”

“Thomas betrayed my trust,” she added. “He manipulated my emotions. You don’t get to use me as your stepping stone to whatever your goal is. Not here, not today, not tonight, not ever.”

Oddly, Katie didn’t give the final rose to anyone else, particularly Christian or Conor C., who both seemed to have decent intentions. David was also sent home.

With Thomas gone, Katie literally opened the door to invite Blake to officially enter the house. Next week, the drama intensifies as Hunter vows to stand out as the competition becomes more grueling and personal with Blake in the mix.