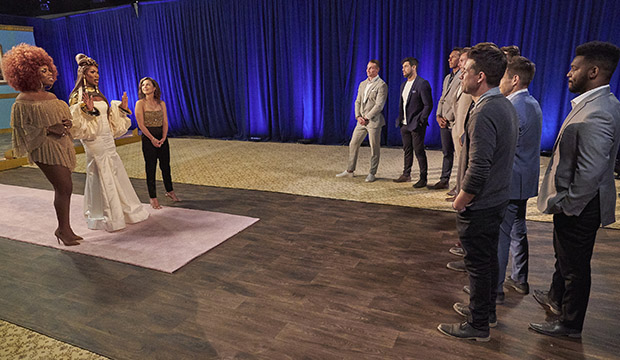 Katie Thurston faced hard truths and oversaw tough eliminations this week on “The Bachelorrette,” notably sending home one of the most charming, endearing contestants to ever appear on the franchise.

At the outset, Katie felt good about the competition thus far, positively assessing where things stood while chatting with Tayshia and Kaitlyn. She said she was feeling a strong connection to Blake, Greg and Michael A. She even felt “smitten” after her one-on-one with Andrew. But in order to shake things up a bit, she wanted to find out which of the guys would be able to forsake pleasuring themselves. In other words, it was time to see who would be the master of their domain. The challenge intended to titillate but eventually became an odd afterthought as the episode shifted toward more compelling factors.

Katie’s first one-on-one was with Justin, who has been flying under the radar. Selecting Justin was a bit surprising considering other guys haven’t received more screen time at all this season, primarily Brendan. Katie and Justin’s date involved creating their imaginary wedding day, guided by photographer Franco Lacosta. Katie particularly looked gorgeous in her white gown. Nerves threatened to get the best of Justin, but he took the momentous occasion in stride. In the end, Katie was thrilled about how everything went in spite of the date’s intensity. “Justin really stepped up,” she said. “He was able to embrace this moment with me and it made it so much more special. And that’s really what I’m looking for in my future husband — someone who wants to just embrace whatever life throws at us.”

SEE ‘The Bachelorette’ episode 5 recap: Katie and Blake have a ball, but the rest of the guys? Not so much

Over dinner, Katie revealed her father who raised her was not her biological father. She acknowledged how emotionally torn she was, mourning the man who raised her while attempting to build a relationship with someone she admittedly knew nothing about. “You continue to amaze me with the strength that you have,” Justin said. “I thank you for sharing all that with me, validating what I thought you were but showing me how much more you are and how incredible you are.” Katie regarded Justin as a “safe space” as she opened up about her past. She gave him a rose and the duo closed the evening serenaded by singer/songwriter/actor MAX.

Back at the house, word got out that Hunter appeared to be a “Bachelor” superfan, so much so that he even frequents the blogs. In a choice that would come back to bite him, Hunter told Greg he predicted they were likely in the top four along with Connor B. (he didn’t name a fourth person). This revelation was prime fodder for the group date, which consisted of Hunter, Blake, Andrew, Michael A., Greg, Aaron, Michael P., Brendan, James and Tre. After a snazzy runway walk, “Ru Paul’s Drag Race” All-Stars Monét X Change and Shea Coulee instructed the guys on how to throw shade in “The Great Royal Debate.” Hunter figured he was going to be the biggest target — and he was. The debate awkwardly started slow and startlingly cordial as if the concept of spilling tea was entirely foreign to them. However, the gloves finally came off when the guys shifted their attention from wooing Katie to dissing Hunter, which was the main point of this exercise in the first place. Interestingly, Hunter didn’t fight back, choosing instead to take the high road.

At the after-party, Katie grew unsure about Hunter’s trustworthiness. In fact, she was so upset she became physically ill. Returning with the guys, she acknowledged she had mixed emotions and she would not hand out a rose. Instead, she would see everyone at the cocktail party prior to the rose ceremony.

SEE ‘The Bachelorette’ episode 4: Katie just gave us one of the greatest rose ceremonies of all time

For the second one-on-one, Katie invited Connor B. along for a double date with Kaitlyn and her fiancé Jason Tartik. Katie didn’t have any qualms with Connor as a friend but seriously questioned whether they had a true romantic connection. Specifically, she hadn’t felt any sparks when they kiss. The activities of the date were fun — volleyball, a cookout — but Katie and Connor’s kiss proved crucial. That evening, Katie met Connor at the house to deliver the bad news. “I really wanted to feel like you were someone I could walk away with at the end of this,” she said. “It’s the most heartbreaking thing because I remember how I felt when we first met. And I hope you know that — you’ve done nothing wrong.  … When we kissed there was something missing in that kiss — and that was hard for me. Because everything about you, everything about us, is so easy, so good, but when we kiss, that was the one and only time that something was missing.” With tears in his eyes, Connor respected her decision. “It’s OK. Because it’s worth it — to have met you.”

In a rare gesture from the producers, Connor was allowed to say goodbye to the guys before leaving. Everyone was shocked. A particularly heartbroken Tre openly shed tears. The impact and influence Connor had on his fellow competitors cannot be denied. It was also refreshing to see the guys be so vulnerable with their feelings. Soon after Connor’s emotional departure, Blake took a cue from “Say Anything.” Showing up at Katie’s balcony with radio in tow, he tried to cheer her up, which he certainly did. After he arrived, the passion between them was evident. Blake is obviously still scoring high marks as one of the best kissers in the house. “It was the greatest surprise ever,” Katie said of Blake’s decision to spend time with her. “I had no idea how romantic he could be. When I’m with Blake, I don’t think about anything else except him and I. … With Blake and I, there is overflowing passion, undeniable chemistry.”

At the rose ceremony, Katie made some of the toughest cuts of the season. But first, she pulled Hunter aside for a brief chat. She was still searching for clarity but nothing of substance was revealed. When Hunter returned, the ceremony began. Four men were sent home: Aaron, Hunter, James and Tre.