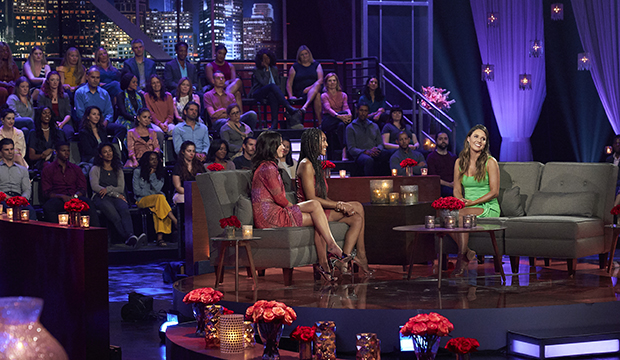 Katie Thurston had mixed emotions this week as “The Bachelorette” balanced a tearful sendoff with an entertaining, engaging edition of “The Men Tell All.”

At the outset, Katie and Tayshia had a heart-to-heart about how things have progressed thus far. Katie admitted she didn’t know how hard the competition would become until she had to say goodbye, particularly referring to Andrew S. In spite of all the tough decisions she’s had to make, Katie still felt confident about her path forward. “I feel so confident about these final four guys,” she said. “I still need to continue to figure out my relationships. Yes, I’m falling in love, but I haven’t admitted to anybody that I’m in love with them.” Tayshia’s advice: If you feel it, say it. “I told multiple people I was falling in love with them,” Tayshia said, referring to her season. “It could be that one thing that someone needs to blossom and be like, ‘I’m all in. I’m head over heels.’”

As Michael contemplated his upcoming hometown, the emotional weight of being separated from his son, James, grew too much to bear. In fact, James telling Michael he went away because he didn’t want to see him was a crushing blow. Surprising Katie at her hotel suite, Michael acknowledged he was skeptical about the entire process but trusted his gut instincts about her. “Our one-on-date was the greatest,” he said. But in the end, he had to put his child first. “I can’t focus on anything else,” he said. “With hometowns coming up, I feel like it’s wrong for me to give you half of what I could be. And it kills me because I see so much for us. My decision totally hurts you too, but I’m going home because every boy needs his dad.”

Katie wanted Michael to stay but respected his decision. “You taught me how to love again,” he said. And with one final kiss and embrace, Michael left, unexpectedly leaving Katie with a final three sooner than she anticipated. “We were so close to the end,” she said. “It just doesn’t feel right. Our connection is still there. Our connection was unexplored. It’s hard to know the impact of him leaving right now. Michael is someone I saw myself walking away with. I knew what my life would be if I chose Michael and that was the life I wanted. His decision is the best decision for his family, but right now, in this moment, it f—ing hurts. And in this moment, I am mad, I am sad. All I’m looking for is to be in love and find my person and it’s very possible that my person just left.”

SEE ‘The Bachelorette’ episode 7 recap: Katie chooses her final four — but not without some second-guessing

After Michael’s heartfelt departure, the episode shifted to “The Men Tell All,” taped in front of a studio audience. With Tayshia and Kaitlyn at the helm, the reunion welcomed: Quartney, Cody, Karl, Tre, Brendan, James, Kyle, Aaron, Connor B., Hunter, Andrew S. and Michael. Disappointingly, Mike, whose virginity was one of the strongest storylines this season, did not appear.

The first question was given to Aaron. Kaitlyn wanted him to explain the backstory between he and Cody. Aaron labeled Cody “disrespectful” and also blamed his “reckless social media posts” in an attempt to achieve some sort of fame from being on the show. Brendan backed Aaron, calling Cody’s social media posts “disturbing.” “You guys have taken Aaron’s side, you guys were in the house longer and built that relationship, but don’t let that sway your view of me or if I was here for Katie or just the followers,” Cody said. “Because I was here for Katie.”

The conversation then shifted toward Karl, who continued to strike a nerve for calling out those he felt weren’t on the show for the right reasons. He particularly told Brendan, a Canadian, that he “only showed up for a free ticket to the United States so he could have free beer the whole trip.” “You’re a snake and scumbag just like I said,” Brendan said. “There’s a big hole in what you’re saying,” Tre added to Karl. “You said there were multiple guys then you just now said of course it was just Thomas. If of course it was Thomas, how could you have said of course there were multiple guys? One of those is a lie, bro. One of them.”

Soon after, Hunter unsurprisingly defended Thomas. “I don’t think Thomas is a bad person,” he said. “I think this setting makes you do things and think things and feel things that you wouldn’t normally do. I think he made some poor choices and he kind of just got caught up in all of it.” “I think, honestly, Thomas is better off because at least he was forthcoming and honest,” James echoed. “Whereas Hunter, we all saw what just aired, I don’t think he can look anyone in the face and say he didn’t flat-out lie.” In a wise move, Hunter did admit dishonesty with his comment about he and others supposedly being in Katie’s top four.

Up next, Connor B. sat in the hot seat. Addressing the lack of passion Katie felt in his kiss, Connor acknowledged he still questioned what exactly went wrong between them. Kaitlyn then asked Connor if had ever been told he wasn’t a great kisser. He admitted he texted two or three people to see if he was a “trash kisser.” “My ex said no, I was a good kisser,” he said. Connor was then interrupted by a mystery woman in the audience who insisted he was “absolutely adorable” and “can’t be a bad kisser.” And with that, she was invited to join him on stage for a kiss. Rating the kiss from one to 10, she said it was an 11.

Tayshia asked Andrew S. if there was one moment in which their relationship might have gone wrong. “I think that’s the hardest part,” he said. “We never had a bad moment — not one time. Every moment was consistently getting better, every moment was consistently good. It wasn’t enough compared to the other guys. And I can’t do anything about that.” Tayshia also commended Andrew’s courage to discuss the challenges of interracial relationships. “When talking about things like that, I want to be realistic,” he said. “Me being a Black man, I’m not afraid of shouldering or having to bear that. As a Black man to represent us, there was no way I was going to shy away from that. That’s exactly who I am. … I’ve always believed in love. I’m a hopeless romantic. I grew up watching rom-coms with my mom. So, I wanted to give this my full effort and see if [Katie and I] could fall in love. And I think we got pretty damn close.”

Michael was the final guy to take the hot seat and Kaitlyn was particularly touched by his journey. “I can’t imagine how hard it was to say goodbye to someone you’re falling for,” she said. “How hard was that?” “It was really difficult,” Michael replied. “Obviously, I was very proud of myself for taking this step and putting myself out there. There was a million reasons why you just say no. And I’m so happy I just did. Katie and I just had this connection that happened right off the beginning. Looking back on it now, nothing’s changed.” In fact, if Katie asked Michael to give themselves another shot, he’d sign on again. “Absolutely,” he said. “It feels as though we left so much unsaid. … I know how beautiful marriage can be. I know how great that bond is. I wanted to let her know that was where we were heading.”

Interestingly, Katie’s climatic arrival didn’t ruffle too many feathers. “My ending is ultimately how everything was supposed to happen,” she said. “I’m a big believer in everything happens for a reason and that’s something I still believe in to this day.” After Katie startlingly yet humorously mistook Aaron for Thomas, Connor brought out a ukulele to serenade her one final time. She also appreciated Karl’s honesty during his time on the show yet noted regarding his elimination that “the men were more important to me than you as an individual,” especially for the sake of the overall show environment. In addition, Thomas appeared via video chat to apologize for the doubts he injected into Katie’s journey. In the end, Katie said she just didn’t feel he was genuine.

Katie’s saga continues next week with the all-important hometown dates with Blake, Greg and Justin. The season will conclude in a three-hour season finale airing Aug. 9. Buckle up!