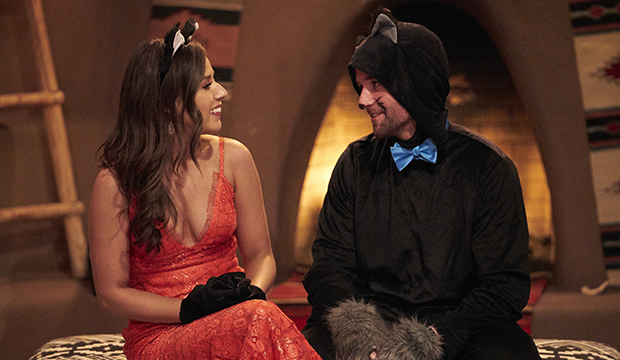 Let the drama begin! The Season 17 premiere of “The Bachelorette” kicked off Katie Thurston’s quest to find love with 30 handsome suitors vying for her affection and attention.

The producers didn’t waste a second bringing the audience up to speed on Katie’s background. Sure, her memorable, vibrator-handy stint to win Matt James’ heart on Season 25 of “The Bachelor” earlier this year brought her to this prized moment, but it never seemed as if we had a chance to get to know who she was throughout all the chaos and controversy. A child of divorce raised in poverty by her mother, Katie said she “never really knew what a healthy marriage looked like.” She also said she had troubles with previous boyfriends, particularly finding a partner in which she could be herself completely. But now, she’s ready to move forward. “I’m happy where I’m at now,” she said. “I’ve learned a lot about myself and I am not going to settle. I’m ready for that love that I deserve. … I feel like being the Bachelorette means I can fall in love and start a family.” In particular, she’s hoping to find someone she “can connect with on all levels.”

At the Hyatt Regency Tamaya Resort and Spa in Santa Ana Pueblo, New Mexico, this season’s co-hosts stepped into the spotlight: Season 16 Bachelorette Tayshia Adams and Season 11 Bachelorette Kaitlyn Bristowe (Chris Harrison’s future with the franchise remains in question). After a few contestant introductions (initial standouts included pro football player Andrew S. of Vienna, Austria, doing a Regé-Jean Page “Bridgerton” impersonation and gym owner Mike of San Diego taking pride in his virginity), Katie arrived, surprised and ecstatic by the sight of Tayshia and Kaitlyn. Katie told the duo she doesn’t have a type — it’s more about personality. She also wants the guys to be open and comfortable with her about sex. In fact, she had some words of warning for her contestants: “While they have seen this ‘silly, sex-positive, loud girl,’ I do have a serious side. It’s great to be funny and have a good time, but I need a grown-ass man.”

Next, the men arrived. Standouts included:

– Aaron, 26, an insurance agent from San Diego with a killer smile

– Tre, 26, a software engineer from Covington, Georgia, who popped out of the back of a pickup truck loaded with balls

– Gabriel, 35, an entrepreneur from Charlotte, N.C., who took the initiative to connect with Katie with a lengthy hug and embrace

– the aforementioned Andrew S., 26, who showed up in a vintage car and donned his best Regé-Jean Page imitation again before revealing he’s actually from Chicago

– Jeff, 31, a surgical skin salesman from Jersey City, N.J., who arrived in a RV

– James, 30, a software salesman from La Jolla, California, who appeared in an oversized box but stopped short of revealing his identity

– Cody, 27, a zipper sales manager from San Diego who wowed Tayshia and Kaitlyn from a distance and winningly showed his sense of humor to Katie thanks to his blow-up doll Sandy

– Quartney, 26, a nutrition entrepreneur from Dallas who benefited from hilarious innuendos that made Katie blush

– Connor B., 29, a math teacher from Nashville who dressed in a cat costume (yes, Katie loves cats).

Once all the men had arrived, we have the biggest reveal: James, aka Box Guy, aka Jay Gatsby, leapt from his box, ultimately intriguing Katie to the hilt. It was apparent that the entire house became nervous about handsome James being a serious competitor and rightfully so. However, Greg received the first impression rose, a bit of a surprise considering Connor B. (who passionately lip-locked with Katie at one point despite the costume) and James seemed to be frontrunners.

At the rose ceremony, Austin, Brandon, Gabriel, Landon and Marty were eliminated.

In future episodes, the house will be rocked by the return of “The Bachelorette” Season 16 contestant Blake Moynes. After being turned down by Clare and Tayshia, does Blake honestly think he stands a chance with Katie? Stay tuned!