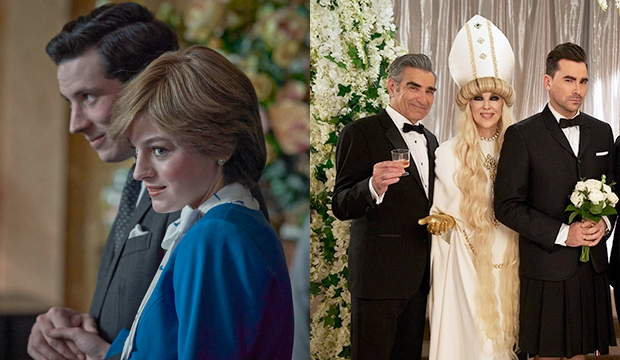 The 78th Golden Globe Awards aired Sunday, February 28 on NBC in a bicoastal ceremony hosted by Tina Fey and Amy Poehler. As usual, we’re still picking our jaws up off the floor over several of the night’s shocking TV winners, as determined by the quirky Hollywood Foreign Press Association. Below, check out our minute-by-minute live report of all 11 Golden Globe television races including what we thought of the drama, comedy and limited series champions. Did you have the same “OMG! WTF?” reactions as we did?

Heading into the ceremony, Netflix was predicted to dominate with six wins: “The Crown” for Best Drama Series, lead actress (Emma Corrin) and supporting actress (Gillian Anderson), “The Queen’s Gambit” for Best Limited Series and lead actress (Anya Taylor-Joy) and “Ozark” for Best Drama Actor (Jason Bateman). Next in line with two predicted victories was Pop TV, all thanks to Best Comedy Series contender “Schitt’s Creek” and its star Catherine O’Hara.

Joining “The Crown” in the drama series lineup is “The Mandalorian,” “Ozark,” “Lovecraft Country” and “Ratched.” The comedy series race is filled out by “Schitt’s Creek’s” co-nominees “Ted Lasso,” “The Great,” “The Flight Attendant” and “Emily in Paris.” In addition to “The Queen’s Gambit,” the other nominated limited series/TV movies are “Small Axe,” “Unorthodox,” “The Undoing” and “Normal People.”

SEE How to watch the Golden Globes

5:00 p.m. — Here! We! Go! Tina and Amy are back for their fourth time as hosts of the Golden Globe Awards, but this time there’s a Covid-inspired social distancing twist: Tina is representing New York’s Rainbow Room while Amy is entertaining from Los Angeles’ Beverly Hilton. What did you think of their hosting performance? Vote in our poll right here.

SEE How did Tina Fey and Amy Poehler do as 2021 Golden Globes hosts? [POLL]

5:34 p.m. — For Best TV Movie/Limited Series Actor, the Golden Globe goes to Mark Ruffalo (“I Know This Much Is True”). He also just claimed the Emmy Award back in September. In both instances, he was the program’s sole nominee. Ruffalo competed at the Globes against Bryan Cranston (“Your Honor”), Jeff Daniels (“The Comey Rule”), Hugh Grant (“The Undoing”) and Ethan Hawke (“The Good Lord Bird”). In his acceptance speech, he makes sure to mention Wally Lamb, who wrote the novel about twin brothers Dominick Birdsey and Thomas Birdsey that was later adapted for HBO. Ruffalo ends by talking about the importance of inclusion and how we must all care for Mother Earth.

6:07 p.m. — Next up is Best TV Drama Actress, with Emma Corrin (“The Crown”) claiming victory over Olivia Colman (“The Crown”), Jodie Comer (“Killing Eve”), Laura Linney (“Ozark”) and Sarah Paulson (“Ratched”). The young actress, who took on the iconic role of Princess Diana on the Netflix drama, seems genuinely shocked at taking the category. She dedicates the trophy to the late British princess, saying, “You have taught me compassion and empathy beyond any measure that I could ever imagine.”

6:20 p.m. — Continuing on with the television categories, we have Jason Sudeikis (“Ted Lasso”) winning Best TV Comedy Actor. He beat out all of the following co-nominees: Don Cheadle (“Black Monday”), Nicholas Hoult (“The Great”), Eugene Levy (“Schitt’s Creek”) and Ramy Youssef (“Ramy”). “That’s nuts,” declares the former “SNL” star and current headliner of the Apple TV+ comedy series. Sudeikis “rejects the premise” of being the best actor on his show, so he dedicates it to all of his “Ted Lasso” co-stars.

6:22 p.m. — And now for a biggie … the winner of Best Comedy Series is Pop’s “Schitt’s Creek.” Not too shabby for a show in its sixth and final season, particularly as the Globes tend to favor first-year shows. The other nominees were “Emily in Paris,” “The Flight Attendant,” “The Great” and “Ted Lasso.” Creator/actor/writer/director Dan Levy gives the emotional acceptance speech from Canada. “Inclusion can bring about growth and love to a community,” he says, adding that he hopes next year’s HFPA membership can be as inclusive as “Schitt’s Creek.”

6:40 p.m. — The next television category is Best TV Drama Actor, with Josh O’Connor (“The Crown”) taking down Jason Bateman (“Ozark”) Bob Odenkirk (“Better Call Saul”), Al Pacino (“Hunters”) and Matthew Rhys (“Perry Mason”). O’Connor played Prince Charles to Corrin’s Princess Diana, and he makes sure to mention her in his speech. “You’re a brilliant player of rock, paper, scissors and I love you to bits,” he jokes.

6:55 p.m. — With O’Connor and Corrin winning the lead prizes for “The Crown,” is there really any doubt about which show claims Best Drama Series? Nope! The regal series prevails over “Lovecraft Country,” “The Mandalorian,” “Ozark” and “Ratched.” Showrunner Peter Morgan thanks Netflix and name-drops the show’s A-plus cast members, all of whom received Globe nominations tonight. “The Crown” is now the first drama since “Homeland” to win the top three trophies.

7:15 p.m. — We’re winding down now, with Best TV Supporting Actress being awarded to Gillian Anderson (“The Crown”). She previously won 24 years ago for “The X-Files,” but now she prevails for her performance as British PM Margaret Thatcher. The other nominees were Helena Bonham Carter (“The Crown”), Julia Garner (“Ozark”), Annie Murphy (“Schitt’s Creek”) and Cynthia Nixon (“Ratched”). Anderson rattles off dozens of names of people she wants to thank before proclaiming, “I couldn’t do it without any of you. I’ll shut up now. Thank you very much.”

7:22 p.m. — Best TV Movie/Limited Series Actress is a battle between Cate Blanchett (“Mrs. America”), Daisy Edgar-Jones (“Normal People”), Shira Haas (“Unorthodox”), Nicole Kidman (“The Undoing”) and Anya Taylor-Joy (“The Queen’s Gambit”), with Taylor-Joy grabbing the statuette. The actress thanks her co-nominees for their work, claiming she knows them all now thanks to their virtual meetings during the pandemic.

7:25 p.m. — The final television category of the night is Best TV Movie/Limited Series, with Netflix’s “The Queen’s Gambit” taking the prize over “Normal People,” “Small Axe,” “The Undoing” and “Unorthodox.” The producer thanks co-creator/writer/director Scott Frank for being the only person who can “bring the sexy back to chess.” That’s a wrap for the television trophies! Also read our film report to see who won on the motion picture side.