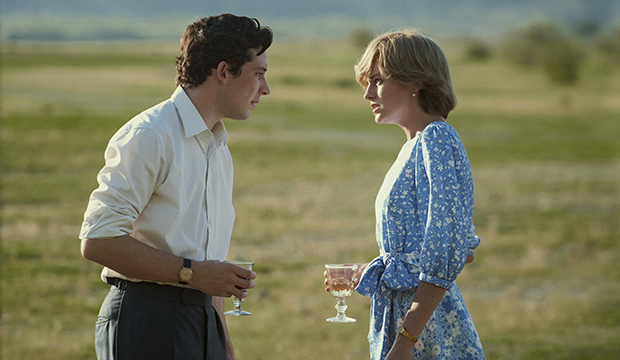 “The Crown” has done what few shows have been able to do: come roaring back to life in its fourth season to take home some of the industry’s top honors after going a few years with little hardware outside of acting. The Netflix royal drama has already picked up both the Golden Globe and the Critics Choice Award for Best Drama Series, as well as the drama ensemble Screen Actors Guild Award. Now it’s poised to potentially take home the award for Best Drama Series at the Emmys this year too. But that’s not all that’s on the menu.

“The Crown” currently sits in first place in Gold Derby’s combined drama series odds, ahead of “The Mandalorian,” “Bridgerton,” “Lovecraft Country,” “Pose,” “The Handmaid’s Tale,” “This Is Us” and “The Boys.” It’s also predicted to succeed in both the lead actor and lead actress races as well. And should it claim all three, it would be the first show to do so since “Homeland” completed the feat in 2012, when Damian Lewis and Claire Danes both won for their efforts in the Showtime drama’s first season.

The predicted success of “The Crown” Season 4 speaks to the renewed quality of the show, but it also says a lot about the relative openness of the drama field after the COVID-19 pandemic delayed production on many shows around the globe. For instance, reigning Best Drama Series champ “Succession” is ineligible this year, as are former nominees like “Better Call Saul,” “Stranger Things,” “Ozark” and “Killing Eve” (though none of them have ever won). This also means reigning Best Drama Actor winner Jeremy Strong (“Succession”) and previous nominee Jason Bateman (“Ozark”), who recently bested O’Connor to take home the individual SAG Award, are also ineligible, opening up a clearer path to the drama actor Emmy.

In terms of drama actress, last year’s winner, Zendaya (“Euphoria”) is ineligible, as is 2019 winner Jodie Comer (“Killing Eve”) and previous nominees Laura Linney (“Ozark”), Jennifer Aniston (“The Morning Show”) and Sandra Oh (“Killing Eve”). Corrin lost the SAG Award to co-star Gillian Anderson, who will compete in supporting at the Emmys, so that bears little significance here. If she can manage to triumph over Colman and doesn’t fall victim to any vote-splitting, Corrin has a good chance of succeeding here too.

While the show definitely benefits from a much less competitive field this year, “The Crown’s” recent success remains impressive, and it should be noted that wins in drama series, lead actor and lead actress in the year 2021 might even be more impressive than “Homeland’s” same triumph in 2012. While the political thriller had the power of the pop culture zeitgeist behind it from the jump, contributing to its ability to break through in Season 1, “The Crown” is not on that same level. Furthermore, it has not had much luck in the major categories at the Emmys. Only Claire Foy and John Lithgow have won for their performances despite a slew of acting nominations across all three previous seasons (its other big win was in directing for Stephen Daldry in 2018), and the show is currently 0-for-3 in the drama series race. It’s not to say no show has ever taken a similar path to winning — “Game of Thrones” didn’t win its first drama series Emmy until Season 5, and Peter Dinklage is the only “Thrones” actor to have ever won for their performance. But the truth is that “The Crown” is not “Game of Thrones,” and a win across Best Drama Series, Best Drama Actor, and Best Drama Actress would be its, ahem, crowning achievement.