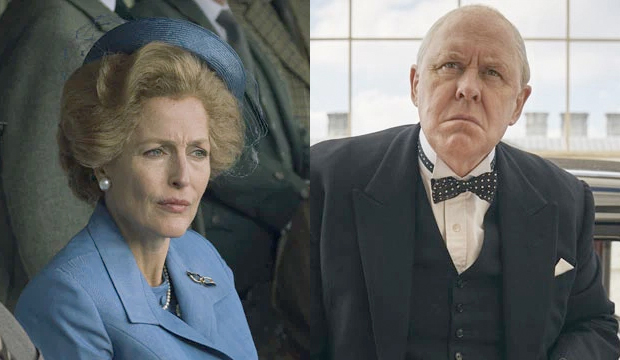 The SAG Awards don’t distinguish between lead and supporting performances for TV shows, so it’s understandably tough for a featured player to prevail. That’s why, on paper, Gillian Anderson seems to have an uphill climb this year for playing UK Prime Minister Margaret Thatcher on “The Crown.” She’s competing against two of her own show’s main stars (Olivia Colman and Emma Corrin) plus a pair of “Ozark” scene-stealers (Laura Linney and Julia Garner). However, on rare instances, featured players are able to overtake lead performers to claim the Screen Actors Guild trophy. Just ask John Lithgow.

For the first season of “The Crown,” Lithgow won the trophy for playing British PM Winston Churchill. Just like Anderson, he was a supporting actor who went through an acclaimed physical transformation — prosthetic makeup, wig, accent, walk, etc. He didn’t face competition from his own show in his SAG category, though he was up against A-listers like Sterling K. Brown (“This Is Us”), Peter Dinklage (“Game of Thrones”), Rami Malek (“Mr. Robot”) and Kevin Spacey (“House of Cards”).

SEEEarly Emmy predictions: ‘The Crown’ will make history for Netflix

Anderson is already a favorite of the actors guild, winning in 1996 and 1997 for her role as FBI Agent Dana Scully on Fox’s “The X-Files.” Sure, it’s been more than two decades, but her nomination for “The Crown” proves the voters haven’t forgotten about her. If Anderson ends up prevailing for a third time, she’d tie Edie Falco (“The Sopranos”) at three victories in this specific race. Julianna Margulies still holds the category record at four triumphs — two for “ER” and two for “The Good Wife.”

Also keep in mind that in this category, three “The Crown” ladies and two “Ozark” stars compete against each other. The last time SAG had a similar “full house” scenario was in 2018 when the nominees were Nicole Kidman, Laura Dern and Reese Witherspoon (“Big Little Lies”) and Lange and Susan Sarandon (“Feud: Bette and Joan”). The stand-out person from the trio, Kidman, took home the trophy. It could be argued that Anderson is the standout from her “Crown” threesome, as she’s the one who gives the biggest physical transformation. Why does that matter? Just last year four people won SAG Awards for completely reinventing themselves: Joaquin Phoenix (“Joker”), Renée Zellweger (“Judy”), Sam Rockwell and Michelle Williams (“Fosse/Verdon”).