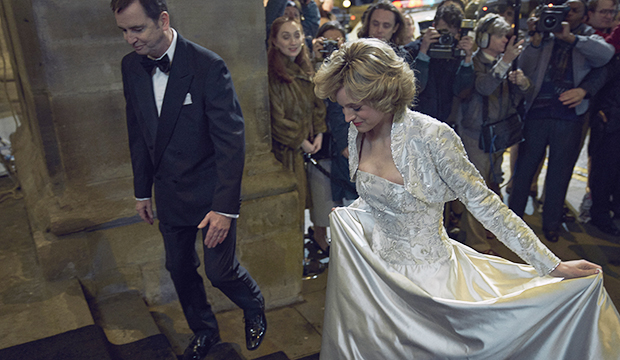 “The Crown” just did something that’s never been done at the Golden Globes before. With its second Best Drama Series win at Sunday’s ceremony, it became the first show to reclaim the award after suffering a loss.

“The Crown,” which was predicted to prevail over “The Mandalorian,” “Ozark,” “Lovecraft Country” and “Ratched,” previously won in 2017 for its first season. It lost for its second and third installments to “The Handmaid’s Tale” and “Succession,” respectively. Until now, no drama series had won, lost and then won again.

One other drama has nabbed non-consecutive Globes: “The X-Files.” But unlike “The Crown,” it did not have a loss sandwiched in between. The sci-fi classic pocketed its first Globe in the middle of its second season in January 1995, but it wasn’t even nominated the following year. It managed to return and win the next two years, giving it a 3-0 record before it lost on its fourth and final nomination to “The Practice” in 1999.

This is, obviously, not the only connection between “The Crown” and “The X-Files.” Gillian Anderson, who took home a Globe for “The X-Files,” also won her supporting turn as Margaret Thatcher on “The Crown.” Four seasons in, “The Crown” is the oldest show to win for a non-final season since “The X-Files” prevailed in the middle of its fifth season in 1998. In the last decade, the final seasons of “Breaking Bad” (fifth season) and “The Americans” (sixth season) won, but it’s uncommon for a show as “old” as “The Crown” to triumph in the middle of its run since the Globes tend to gravitate towards shiny new things. Save for “Breaking Bad” and “The Americans,” the winners in the past two decades won for their third seasons or earlier.

“The Crown” also won lead acting awards for Emma Corrin and Josh O’Connor, making it the first show since “Homeland” in 2013 to sweep all three drama categories. Along with Anderson’s win, “The Crown’s” four victories are the most by a show since “Big Little Lies” also took four in 2018.