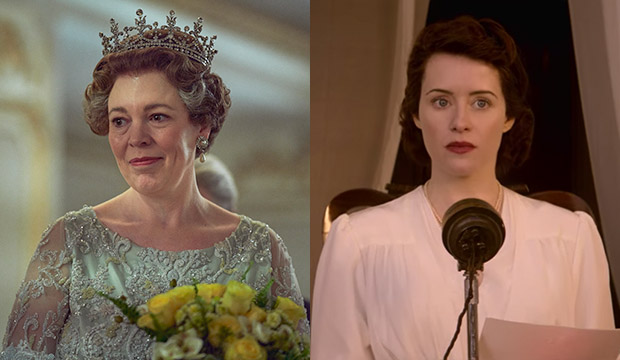 “The Crown” could be seeing double at the Emmys — as in double wins for two portrayals of Queen Elizabeth II. Olivia Colman is contending in the Best Drama Actress race while her predecessor Claire Foy is looking to nab a bookend statuette in Best Drama Guest Actress.

A year ago, no one would’ve considered this possible double dip because Foy’s appearance in Season 4 was kept under wraps. She appears in the opening minutes of the episode “48:1,” reprising her role as the monarch — then Princess Elizabeth, who delivers a radio broadcast on her 21st birthday, pledging her lifelong dedication to the British Commonwealth. It was Foy’s first appearance on “The Crown” since Season 2, for which she won the Best Drama Actress Emmy on her final shot for the show — at least in that category.

Foy, of course, passed the baton to Colman, who played Queen Elizabeth in the third and fourth installments. Colman was nominated in Best Drama Actress last year, losing to Zendaya (“Euphoria”), who won’t be back to defend her, uh, crown due to COVID-related production delays. But the Oscar winner has new competition this year in the form of her co-star Emma Corrin. This is the first time “The Crown” has fielded double lead actress contenders, but much of the buzz of Season 4 hailed from the focus on Princess Diana (Corrin) and Prince Charles‘ (Josh O’Connor) tumultuous marriage.

SEE Not so fast, Emma Corrin: 5 Emmy Experts think Olivia Colman will reign for ‘The Crown’

At the moment, it seems unlikely Queen Elizabeth can produce a win this year, let alone two. Colman is pretty much a shoo-in for another drama actress nomination, but she is in second place in the odds behind Corrin, who beat Colman for the Golden Globe and Critics Choice Award earlier this year. They both lost the individual Screen Actors Guild Award to their co-star Gillian Anderson, who’s in supporting at the Emmys. Corrin would also fit the recent trend of young winners in the category, following Zendaya and Jodie Comer (“Killing Eve”), as the 25-year-old would be the second youngest drama actress champ behind only Zendaya, who was 24. This is the last chance (or the only chance in Corrin’s case) to award either of them in this category as the royal drama will welcome a new cast for the final two seasons.

Meanwhile, Foy is in fifth place in the early drama guest actress odds, trailing former champ Alexis Bledel (“The Handmaid’s Tale”), Phylicia Rashad (“This Is Us”), Rosario Dawson (“The Mandalorian”) and Mckenna Grace (“The Handmaid’s Tale”). Of note, despite “The Crown’s” sprawling cast and multiple nominations in the regular acting categories over the years, it is weak in the guest categories, having only netted one bid ever, for Matthew Goode in Season 2, compared to something like “Handmaid’s,” which won drama guest actress three years in a row. But with “The Crown” being the drama series frontrunner and Foy — a person they have already awarded for this role — being a pretty easy name-check in a category that likes name-checks — do not count her out.