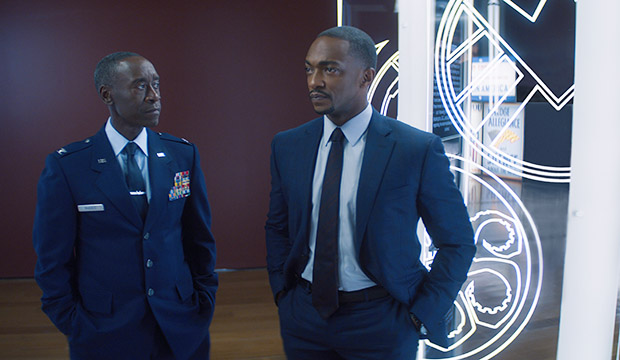 Though you may not realize it, Don Cheadle has accrued 10 Emmy nominations throughout his career, receiving bids in the comedy, drama and limited series/TV movie categories. The versatile actor, who currently stars on Showtime’s dark comedy “Black Monday” as Maurice “Mo” Monroe, has already earned two consecutive nominations for Best Comedy Actor for his performance. And although the show is ineligible for this year’s Emmys, Cheadle still has an opportunity to earn his 11th Emmy nom come July, this time in the Best Drama Guest Actor category.

Making the jump from Marvel movies to Marvel TV shows, Cheadle reprised his fan-favorite role of Colonel James “Rhodey” Rhodes, aka War Machine, in the series premiere of Disney+’s six-episode series “The Falcon and The Winter Soldier.” It was a brief appearance; Rhodey is present when Sam Wilson (Anthony Mackie) turns over Steve Rogers’ (Chris Evans) iconic shield to the Smithsonian for display in its Captain America exhibit. After Sam’s speech, Rhodey joins Sam for a leisurely walk around the museum and asks him about his decision not to take up the mantle of Captain America, pointing out the world is broken and that people are looking for someone to fix it. They also stare at a lot of photos of Evans and old propaganda from the war.

Should Cheadle, who has yet to win an Emmy, earn a nomination for this performance — he is currently in seventh place in Gold Derby’s combined odds — it will be his second in the Best Drama Guest Actor category. He was previously nominated in 2003 for his guest turn on “ER.” His other Emmy nominations were in the formerly named Best Miniseries or Movie Actor (“A Lesson Before Dying,” 1999), Best Supporting Miniseries or Movie Actor (“The Rat Pack,” 1999; “Things Behind the Sun,” 2002) and Best Comedy Actor (“House of Lies,” 2012-2105; “Black Monday” 2019-2020).

Cheadle’s main scene in “The Falcon and The Winter Soldier” lasts approximately 1 minute and 45 seconds. When combined with the 15 seconds or so the actor is seen in reaction shots during Sam’s speech, his entire appearance in the episode comes to roughly 2 minutes of screen time. That might not seem like enough time to leave a lasting impression on viewers, but Emmy voters are big on name recognition, especially in guest, which could work in his favor here. The category is also fairly open, especially without reigning champ Ron Cephas Jones (“This Is Us”).

There is also precedent for voters to nominate and award guest stars despite having only minimal screen time. Character actress Margo Martindale, a three-time Emmy winner, won her second consecutive Best Drama Guest Actress Emmy in 2016 for “The Americans” after appearing in a single scene that was approximately 90 seconds in length. Meanwhile, Cherry Jones, another three-time Emmy winner, took home the very same award in 2019 for her performance in “The Handmaid’s Tale” even though her two scenes in her submission episode were less than 2 minutes and 30 seconds combined.

Cheadle, who will again reprise the role of Rhodey in the upcoming Marvel series “Armor Wars,” isn’t the only performer from “The Falcon and The Winter Soldier” hoping to nab a guest bid with a brief appearance though. Julia Louis-Dreyfus, who portrayed new character Contessa Valentina Allegra de Fontaine on the show, has submitted the fifth episode for consideration for Best Drama Guest Actress. The “Veep” star’s total screen time, from entrance to exit, is approximately 1 minute and 45 seconds. Should she receive a nomination and win, it will be her 12th Emmy overall and her ninth for acting, which would allow her to break her tie with Cloris Leachman for the most Emmys for a performer.

If anyone can pull off something like this, it’s Cheadle and Louis-Dreyfus, so pay close attention when Emmy nominations are announced Tuesday, July 13.