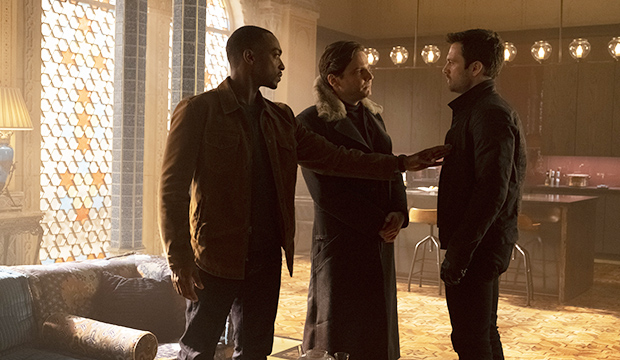 Many assumed “The Falcon and The Winter Soldier,” Marvel’s original series for Disney+ that stars Anthony Mackie and Sebastian Stan as their fan-favorite characters Sam Wilson and Bucky Barnes, respectively, would compete in the limited series categories at the Emmys alongside “WandaVision.” Despite hints from Marvel boss Kevin Feige in February that some of Marvel’s new shows have been developed to be ongoing series, there has been no confirmation the action drama is one of them even though it easily lends itself to additional seasons. The recent news that “The Falcon and The Winter Soldier” will be submitted in drama instead of limited series at the Emmys has obviously raised several questions about whether the show will return, but the more immediate impact of the news is obviously on the show’s Emmy chances, which have likely just risen in multiple categories.

By having the Malcolm Spellman-created show compete in drama, Marvel is now able to avoid direct competition between its two Emmy-eligible series and eliminates any vote-splitting that might occur down the line (although “Loki” was originally scheduled for May, it now won’t debut until June 11 and the eligibility period ends May 31). With its high-concept, out-of-the-box style, “WandaVision” has always had an edge over the more traditional superhero action and drama that “The Falcon and The Winter Soldier” dabbles in. By separating the two shows, it ultimately improves both series’ odds and removes any worry that voters might not want to reward multiple Marvel shows in the same category.

Also working in the show’s favor now is the fact the drama field is less competitive than the limited series race this year — not mention, there are more slots in the drama categories, most notably eight in drama series vs. five in limited series. Many television productions were shut down or derailed by the COVID-19 pandemic, which means reigning Best Drama Series champ “Succession” and former nominees like “Better Call Saul,” “Stranger Things,” “Ozark” and “Killing Eve” are all ineligible this year. That leaves room for a new show like “The Falcon and The Winter Soldier” to sneak in, especially since anti-superhero show “The Boys” underperformed at the winter awards outside of a Writers Guild of America Awards nomination. After it was moved to drama in the predictions center on April 20, “The Falcon and The Winter Soldier” debuted in 13th place in Gold Derby’s combined drama series odds and is currently in 12th.

As it stands right now, “The Crown” is the current drama series frontrunner, having already experienced great success with its fourth season, which has taken home top honors at the Golden Globe, the Screen Actors Guild, Producers Guild of America and the Critics Choice Awards while picking up a slew of acting wins as well. It’s in first place in the odds. Other drama series to watch out for include “Bridgerton,” which missed the Globes but was nominated at the SAG Awards; “Lovecraft Country,” which hit both Globes and SAGs though didn’t win at either; and former Emmy winner “The Handmaid’s Tale,” which returns for its fourth season on April 28. “Pose,” whose third and final season premieres May 2, and “This Is Us” could potentially sneak in given the weak field, but both shows were dropped in 2020, which means voters might have cooled on them a bit.

There is also the matter of fellow Disney+ series “The Mandalorian,” which might be the closest comparison we have to a show like “The Falcon and The Winter Soldier.” The popular streaming drama is also based on an existing film franchise and this past season featured the return of a character from the “Star Wars” films. The show received a series nomination last year for its first season despite not earning any acting nominations outside of a guest actor bid for Giancarlo Esposito and a nom for voiceover performance for Taika Waititi. It was also all over the tech and craft categories, and it seems likely “The Falcon and The Winter Soldier” will follow in its footsteps in those areas knowing that voters are open to series like it.

Which brings us to the acting categories. It’s easy to believe Mackie and Stan will compete against one another for lead actor. Not only is the show a true two-hander, but the series has two viable supporting actor candidates, so it makes less sense to split Mackie and Stan up in a strategic attempt to secure both men nominations. If both were to receive lead actor nominations, they would become the 18th pair of co-stars to be nominated together after “Succession” stars Brian Cox and Jeremy Strong last year.

Unfortunately, while the lead actor race isn’t incredibly stacked, there is formidable competition. There are several former winners eligible again this year, including Billy Porter (“Pose”), Matthew Rhys (“Perry Mason”) and Sterling K. Brown (“This Is Us”), and voters love to rubber-stamp. Meanwhile, Josh O’Connor of “The Crown” has picked up a Golden Globe and a Critics Choice Award for his performance as Prince Charles and was nominated for an individual SAG Award. And then there’s “Bridgerton” breakout Regé-Jean Page, who scored an individual SAG Award nomination and is not returning for the second season. Assuming that momentum holds and the acting branch of the academy, which obviously overlaps with SAG, still likes O’Connor and Page in a few months, that is already five of six slots filled. Even if one or two of these men were to miss, it seems unlikely, though not impossible, voters will go for two actors from the same show when that show is not in the Emmys’ usual wheelhouse.

Of the two, though, Stan is probably better known to TV audiences, dating back to his “Gossip Girl” years — and although Emmy voters didn’t go for it, his performance in the critically acclaimed miniseries “Political Animals” did earn him a Critics Choice Award nomination in 2013. Mackie, who also stars in Amazon’s anthology series “Solos,” premiering May 21, might have a better shot at a nom, though, given Sam’s extremely relevant material. At the moment, Stan is in 11th place and Mackie is in 23rd in the drama actor odds.

Where the show has a better shot of scoring multiple nominations is in the guest and supporting categories, which are much more open and the former, much more prone to name-checking. Julia Louis-Dreyfus and Don Cheadle are both beloved by Emmy voters even if the latter, who appeared in the series premiere, has yet to take home an award out of his 10 nominations. Meanwhile, Louis-Dreyfus is an 11-time winner who seems to be on the path to No. 12 after her short but memorable performance in the show’s fifth and sixth episodes as Contessa Valentina Allegra de Fontaine. That then leaves us with Carl Lumbly, who probably deserved an Emmy nomination (at least) for his performance in “Alias” but gives yet another memorable turn here as Isaiah Bradley, a Black super-soldier who was used and abused by the U.S. government during and after the Korean War. He would’ve been a perfect guest actor contender, but he appeared in three of the show’s six episodes, including the finale, meaning he’d have to compete in supporting now.

In the supporting categories, Daniel Brühl, who reprised his role as Baron Zemo on the show, gave a scene-stealing performance, complete with a memorable dancing meme. And in a category that is as open — with seven vacated slots — and weak as drama supporting actor is this year, it wouldn’t be surprising if Emmy voters rewarded him for it by throwing a nomination his way. He’s currently in 11th place. Sitting inside the top 20, Wyatt Russell, who portrays John Walker, the new and now former Captain America whose storyline digs into how the U.S. fails its veterans, faces more of an uphill battle. As does Emily VanCamp, who’s in the top 30 after reprising her role of Sharon Carter from “Captain America: Civil War” (2016) in a somewhat lackluster storyline sandwiched in between kicking butt in the third episode and some big reveals about Sharon in the finale. She won’t be able to submit in guest actress, which could have given her a better shot at a nom since it doesn’t include most of the women of “The Handmaid’s Tale” and “The Crown,” like Golden Globe, SAG, and Critics Choice Award winner Gillian Anderson.

Regardless of the battles these actors face, though, the move to drama has opened up a whole new set of possibilities for “The Falcon and The Winter Soldier,” so it can only be seen as a good thing.